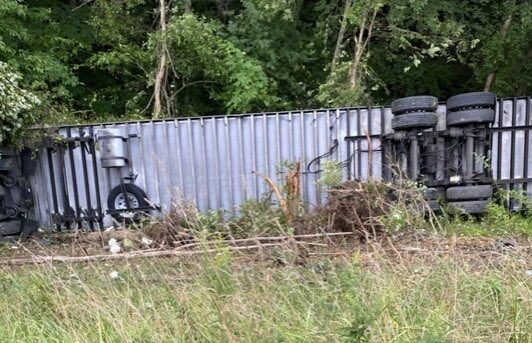 The truck rolled down an embankment after the crash near the Goshen Road exit. Photo/DOH

UPDATE: The wreck was cleared and both northbound lanes were opened at around 1 a.m. Saturday

MORGANTOWN, W.Va. — The large truck that crashed on Interstate 79 near Morgantown early Friday morning was carrying doses of COVID-19 vaccine.

According to authorities, doses of Moderna vaccine bound for a foreign country were on the truck that crashed in the bridge construction zone on I-79 northbound just south of the Goshen Road exit at around 4 a.m. Friday.

Both northbound lanes remained closed at mid-afternoon Friday. Authorities said the reopening of the highway would be posted on social media. Northbound motorists were being directed off the interstate at the downtown Fairmont exit.

The West Virginia Center for Preparedness helped recover the vaccine, but it is unknown how much was saved.

The Monongalia County Sheriff’s Department said the driver lost control, struck a concrete barrier and went 30-feet down an embankment.

The driver was trapped for a brief period of time before being transported to Ruby Memorial Hospital with minor injuries.

Members of the Monongalia County Hazmet Team cleaned up 50 gallons of oil and anti-freeze at the crash site.

Firefighters from Triune-Halleck, Winfield District and Clinton District along with DOH and Mon EMS assisted.