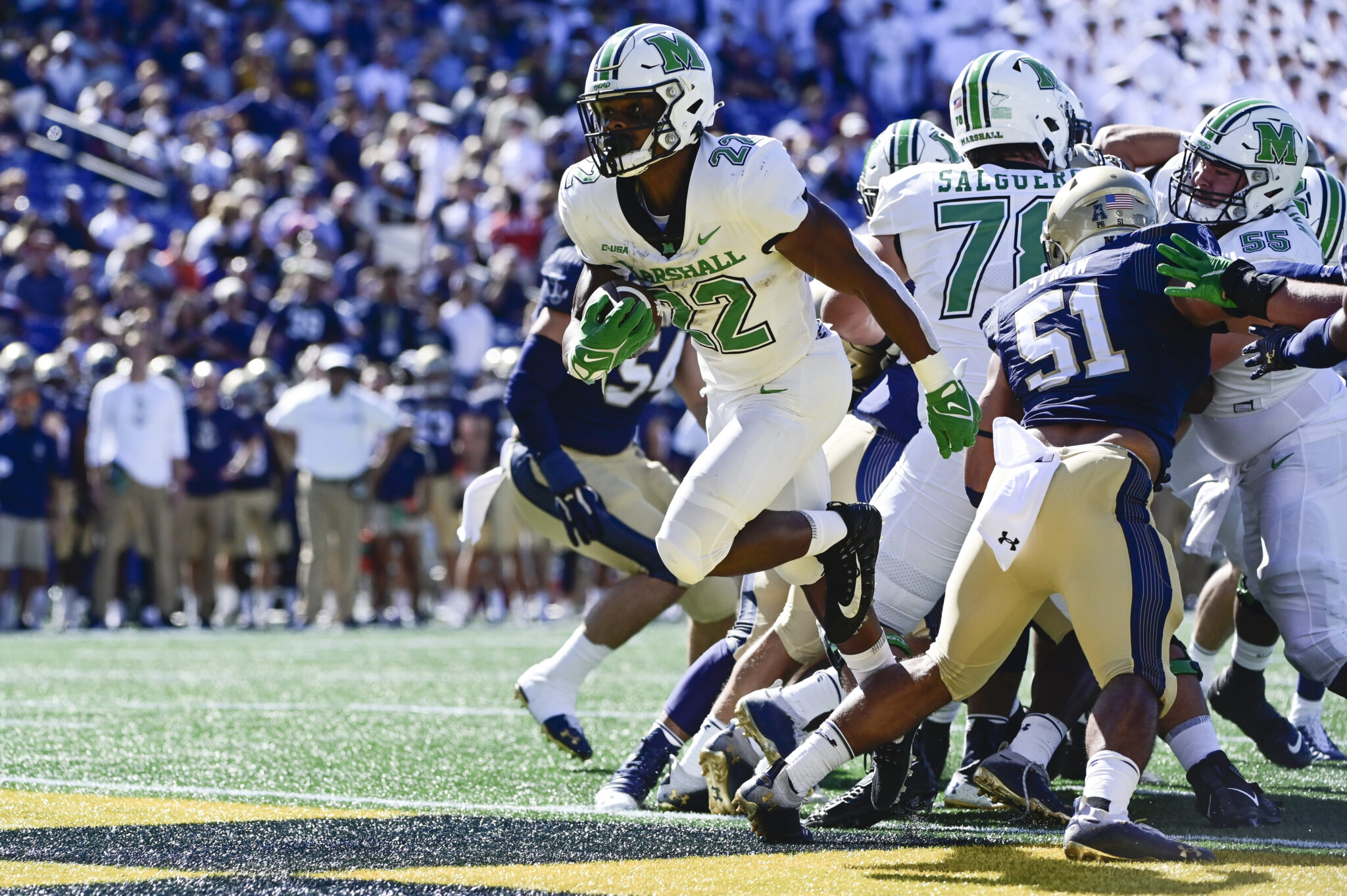 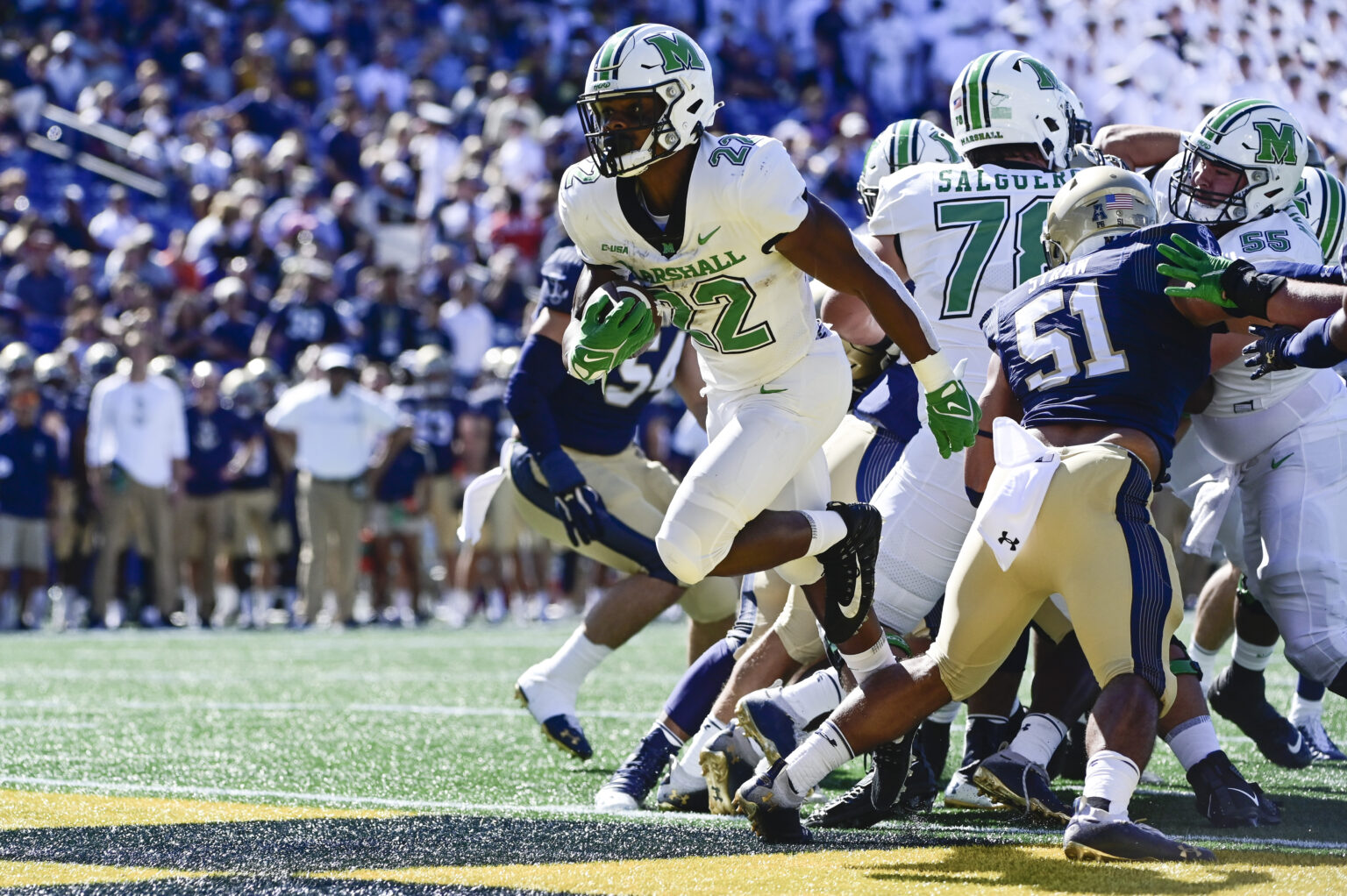 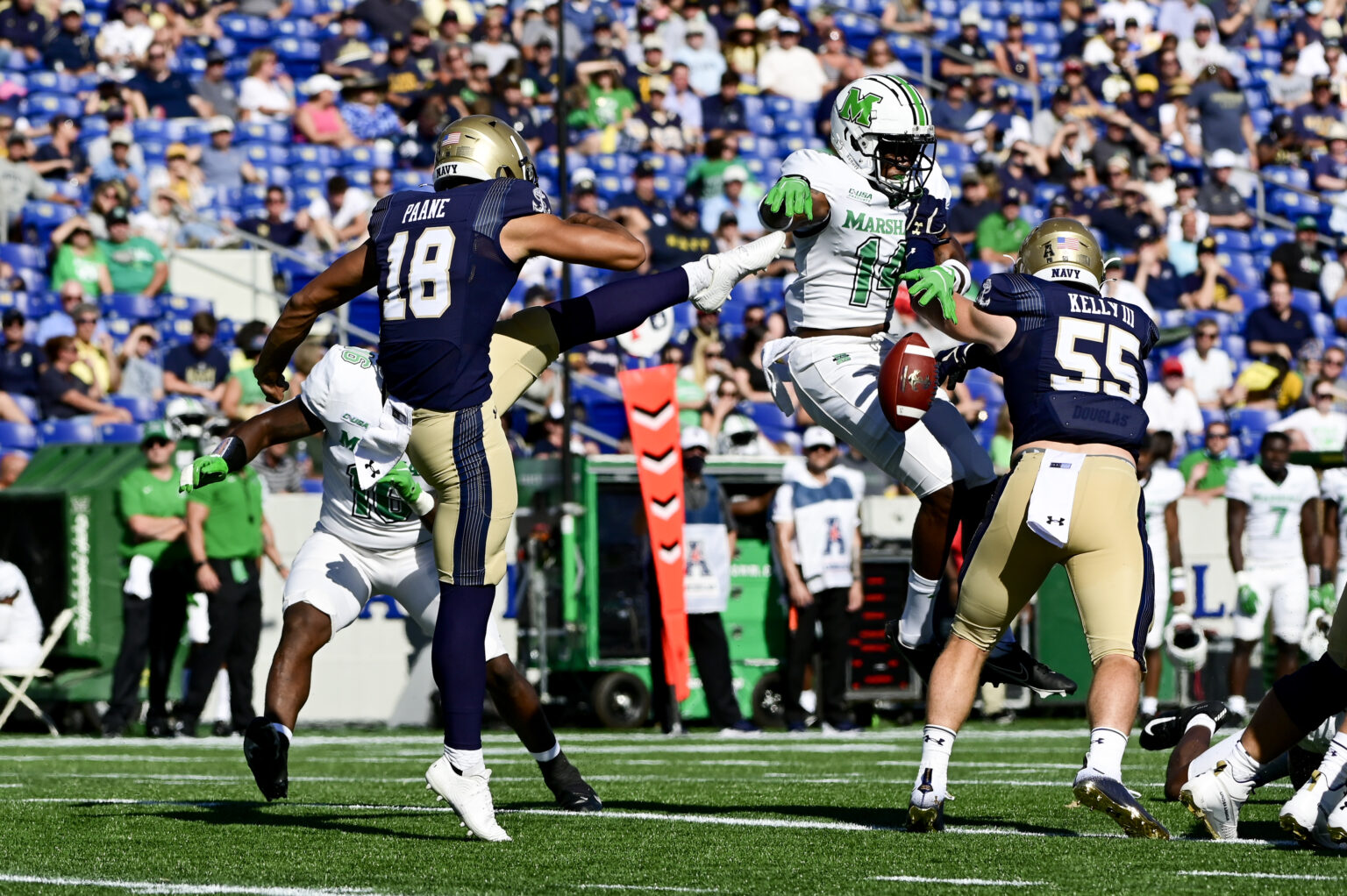 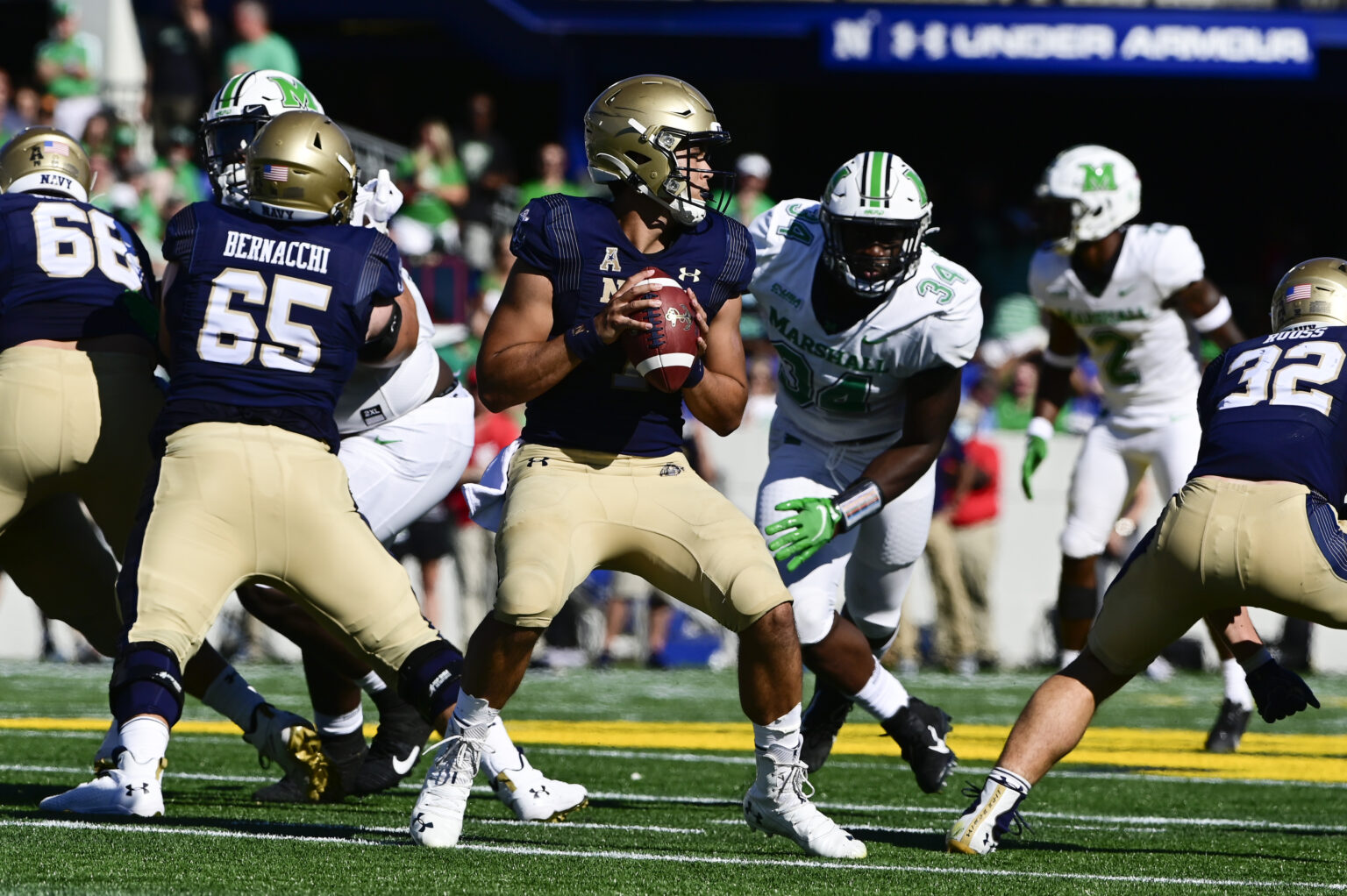 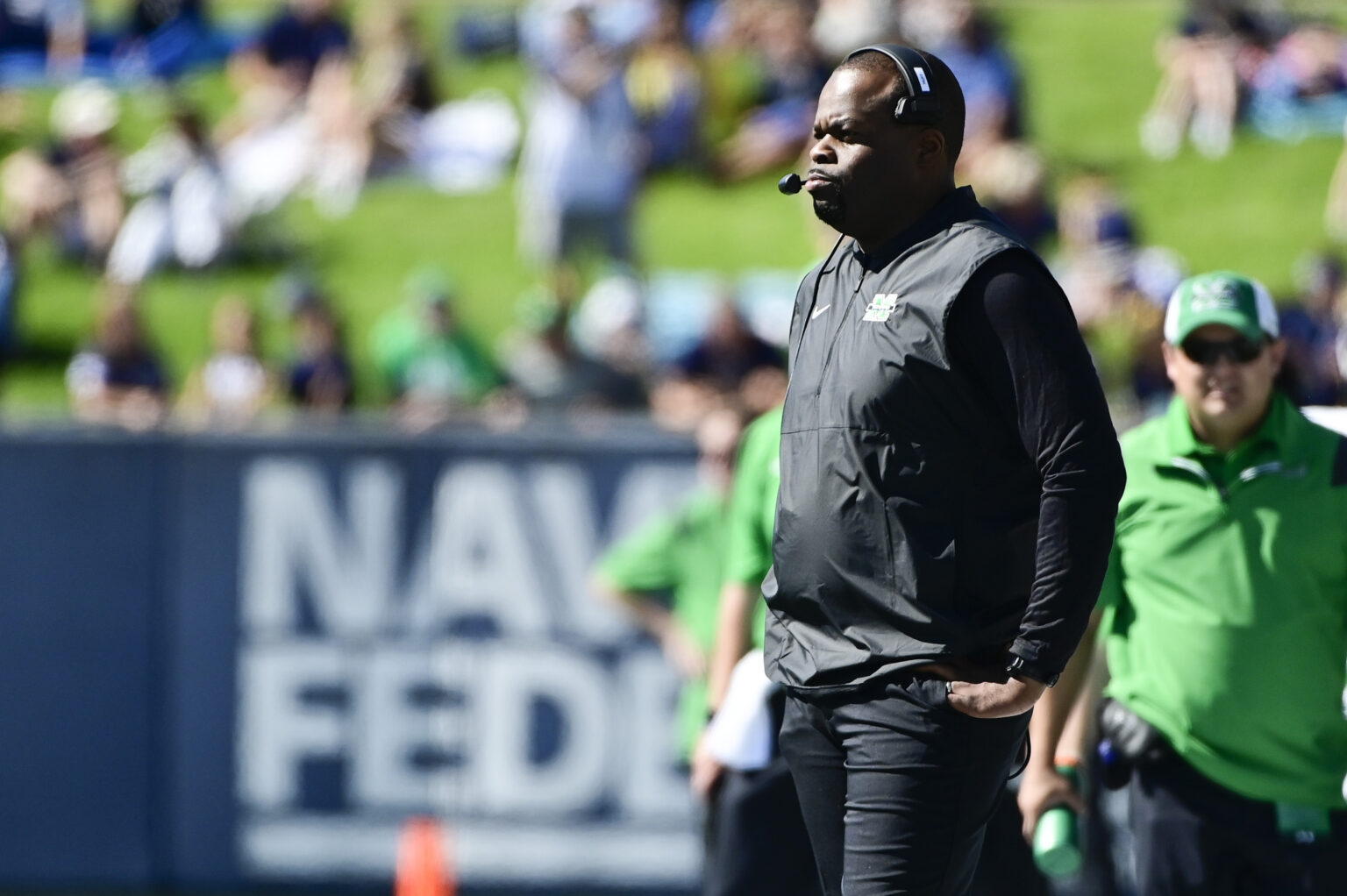 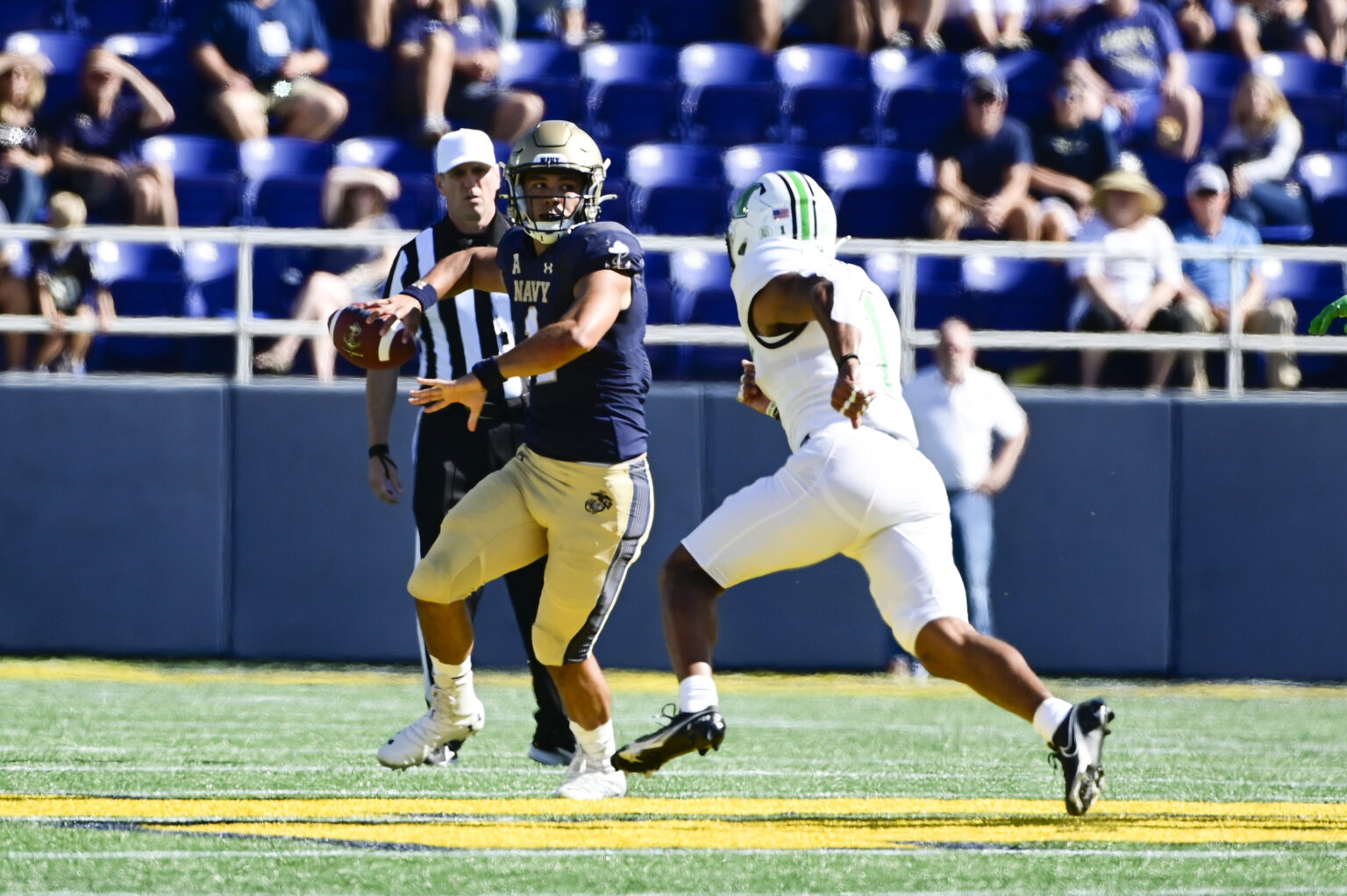 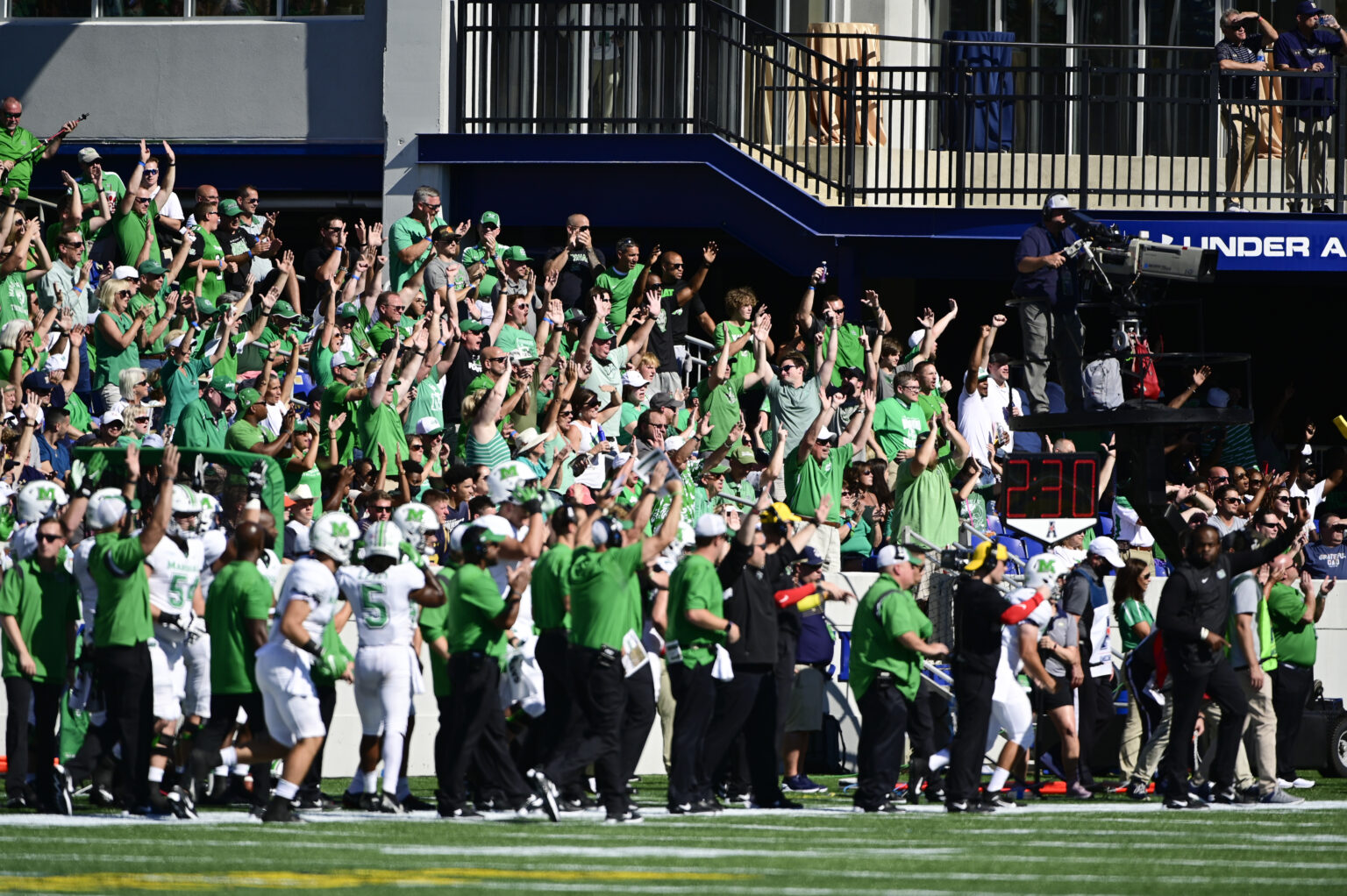 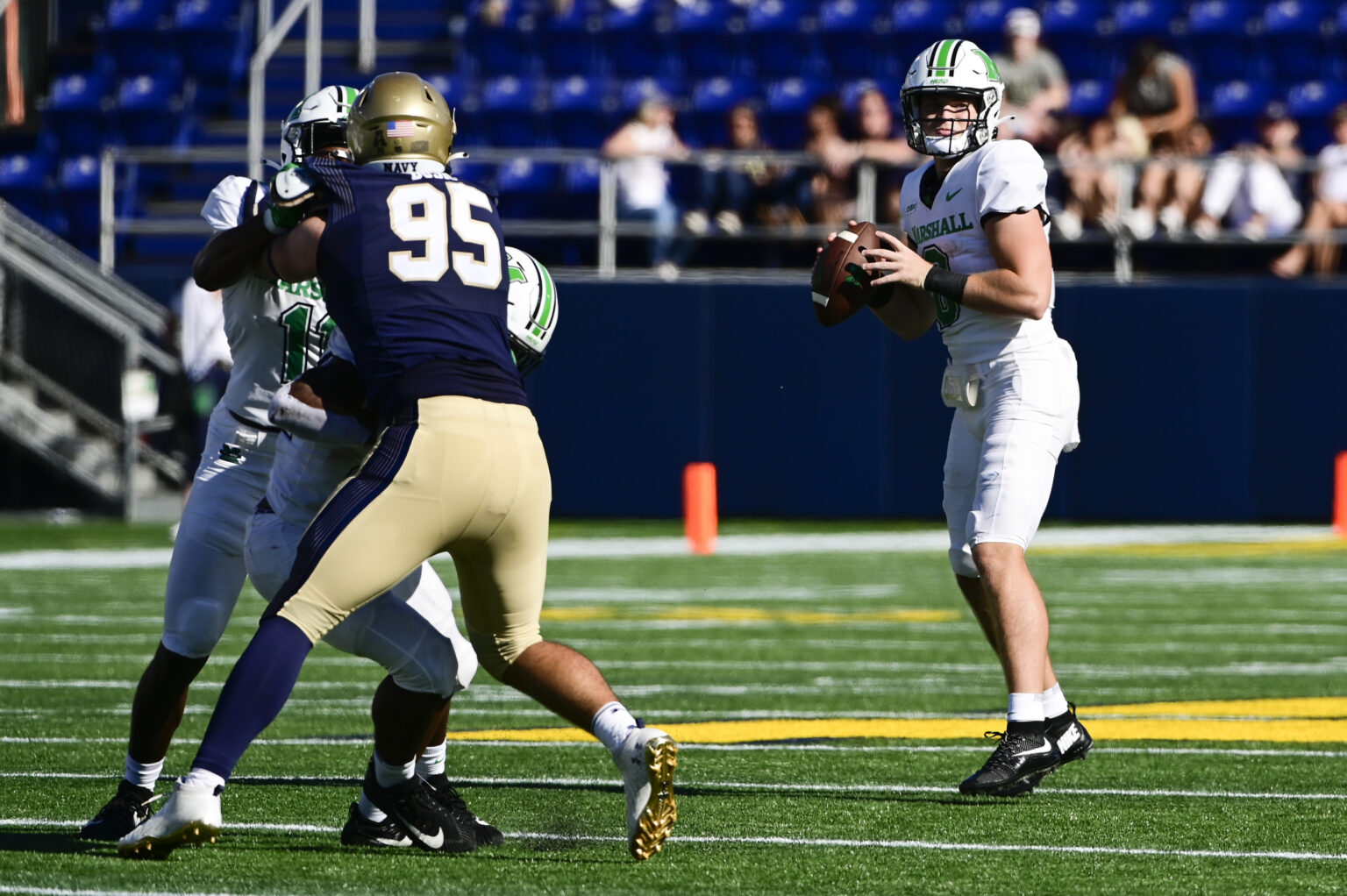 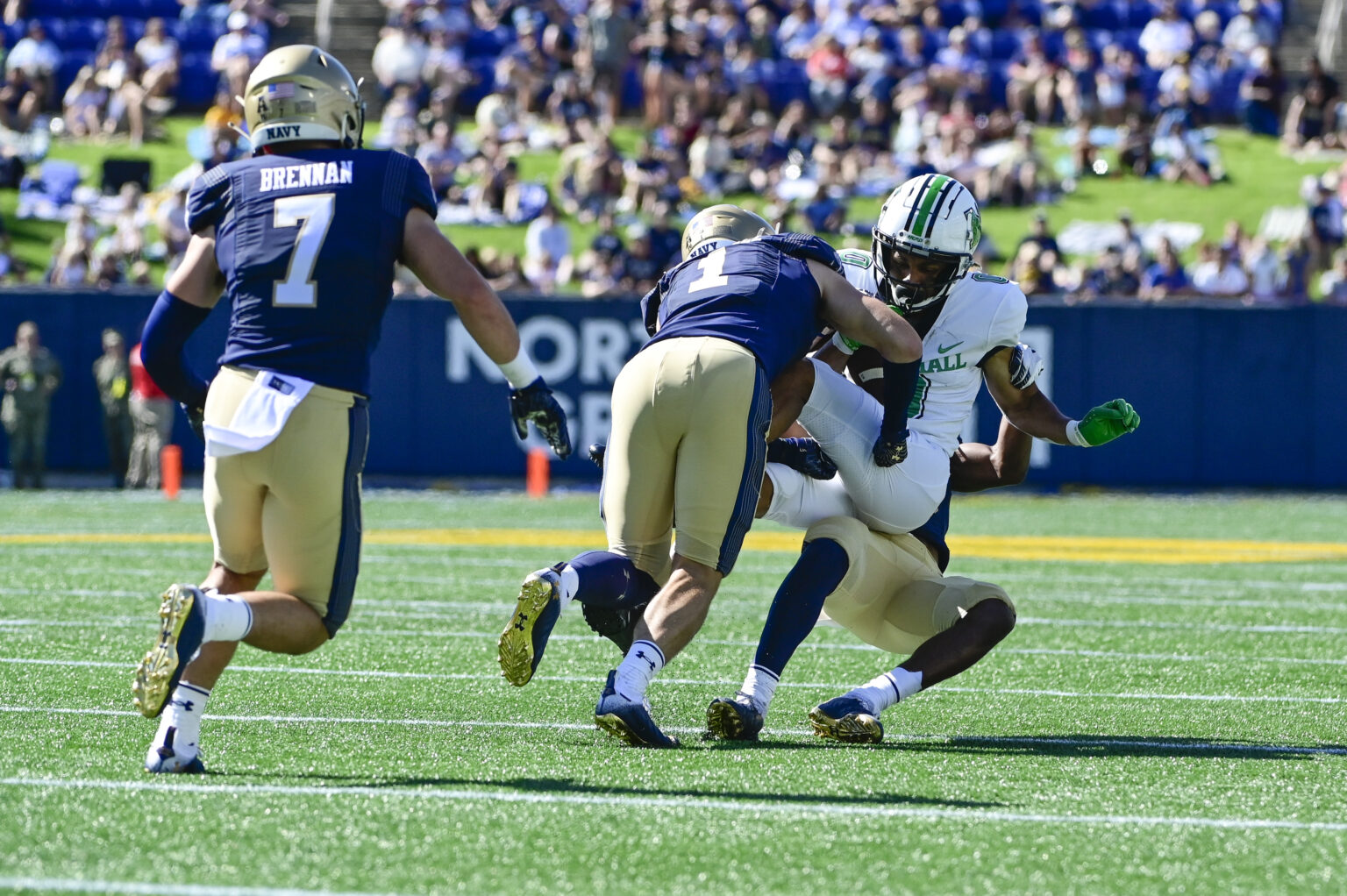 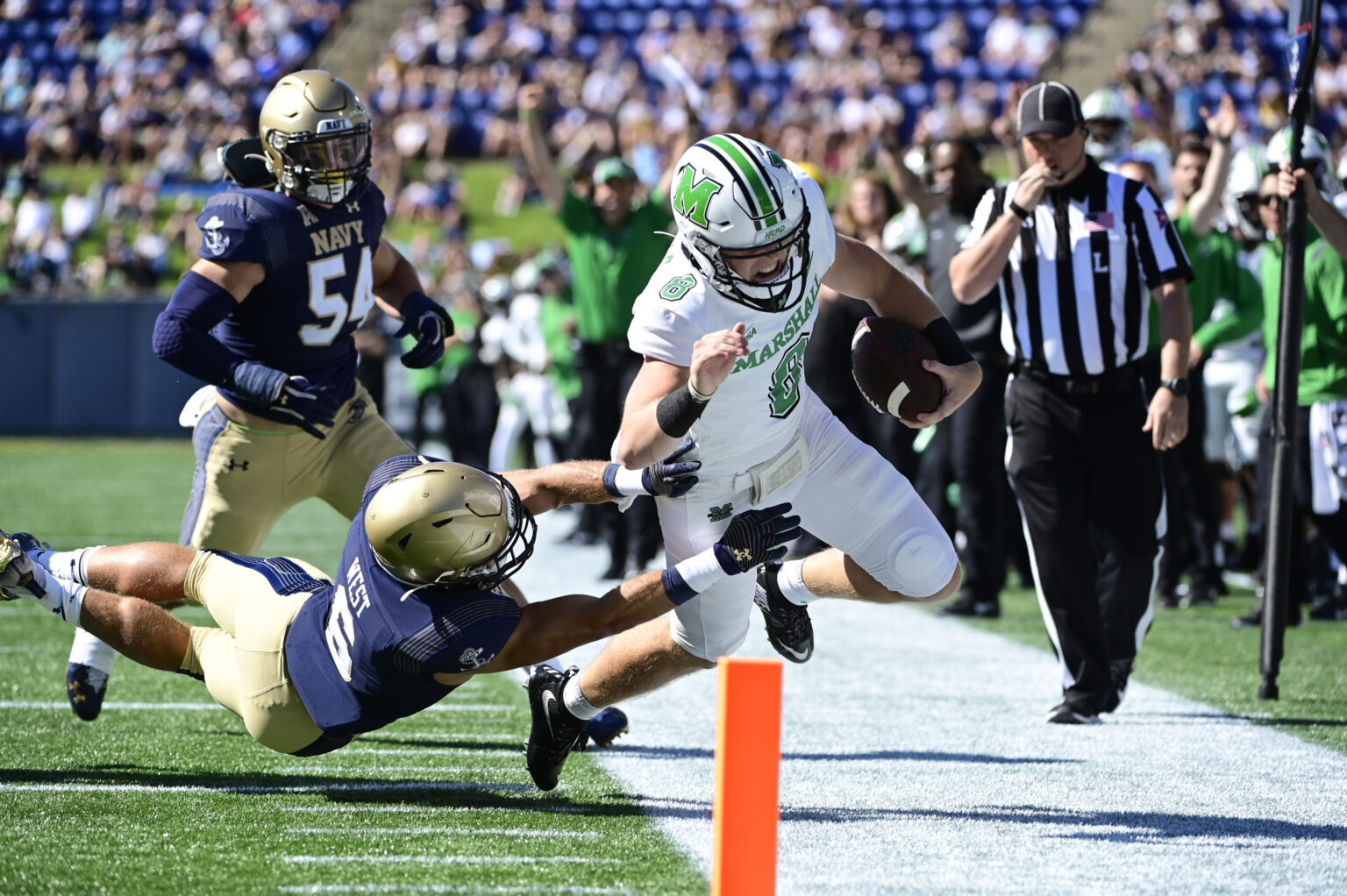 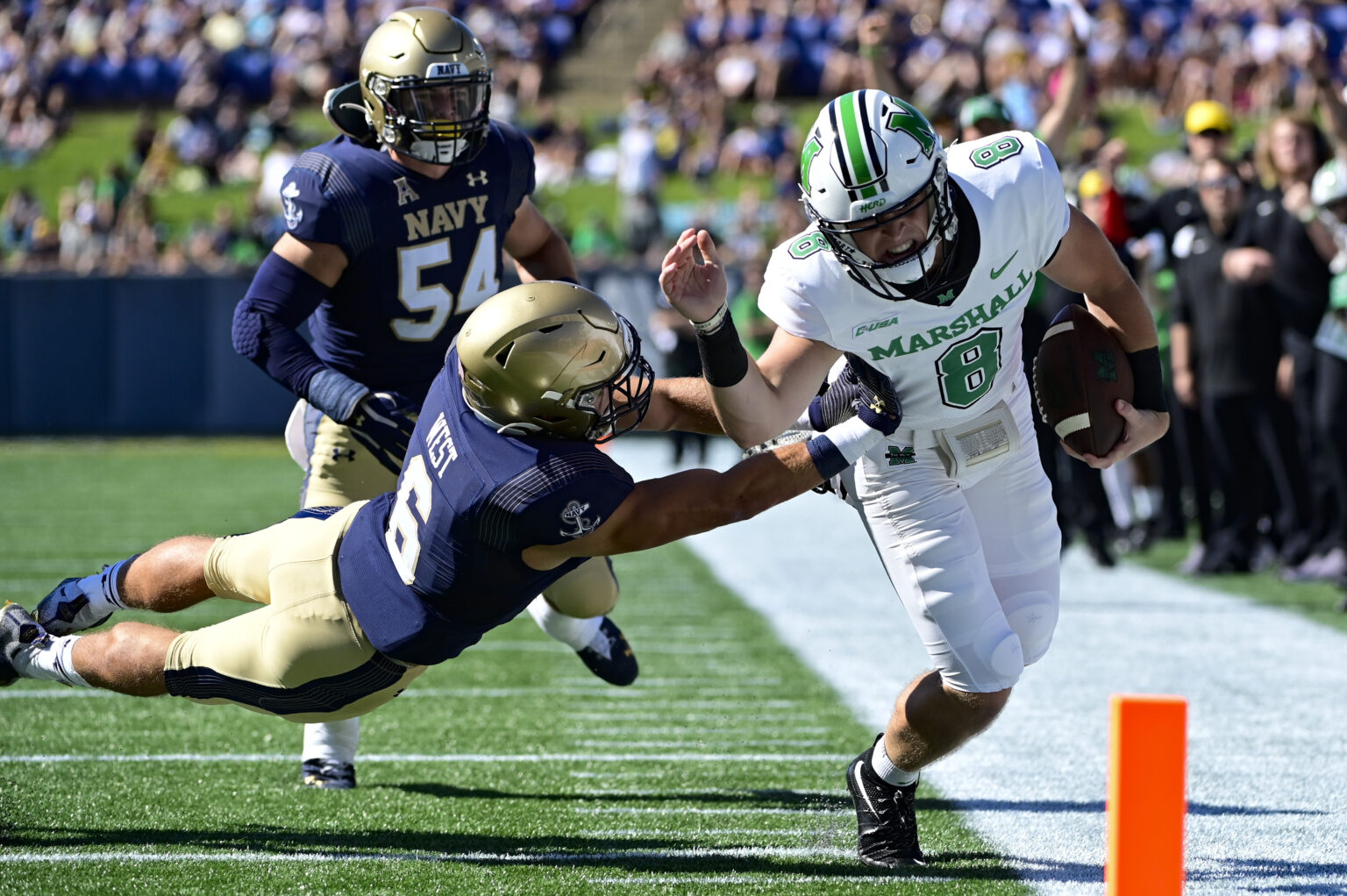 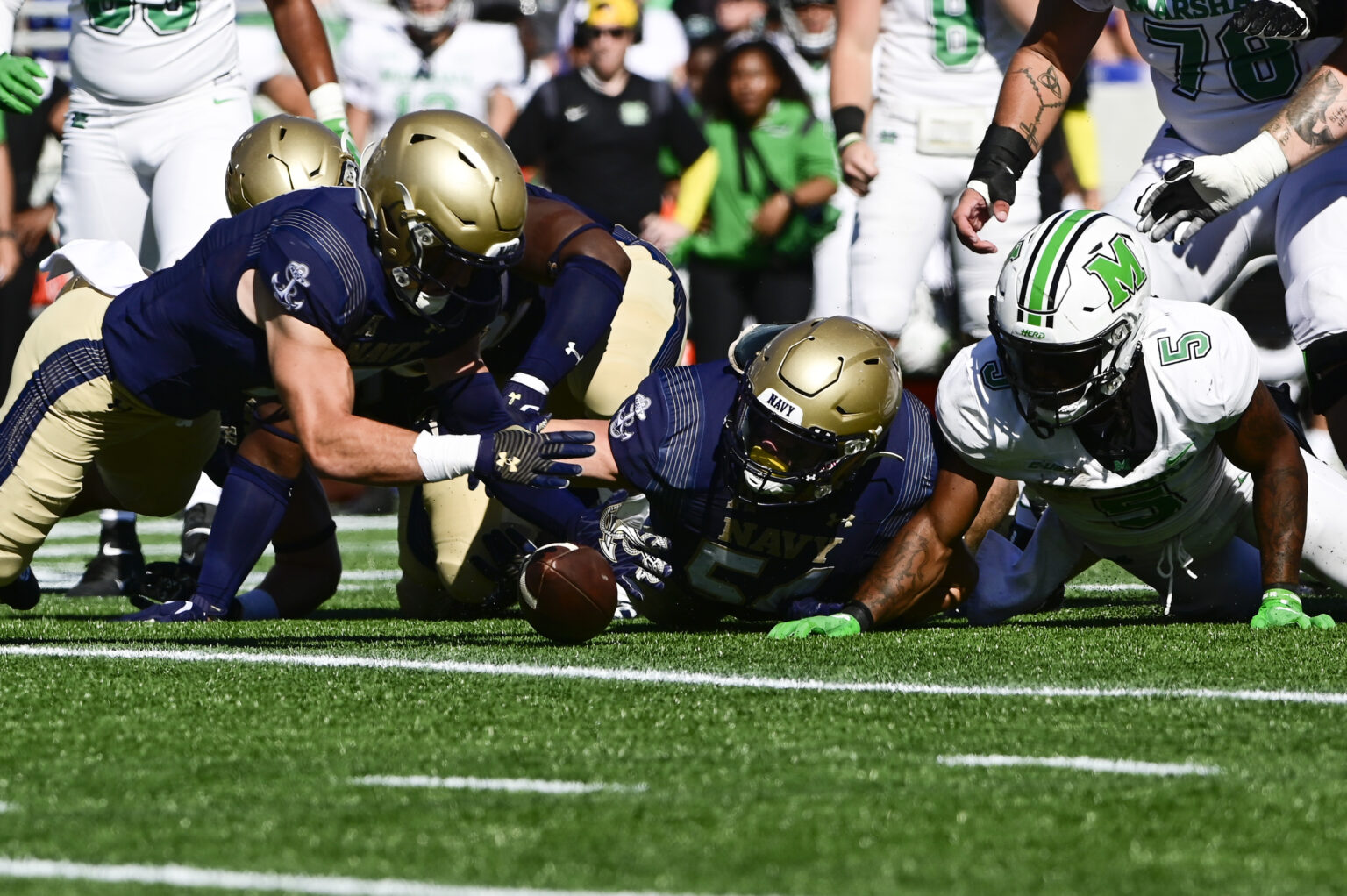 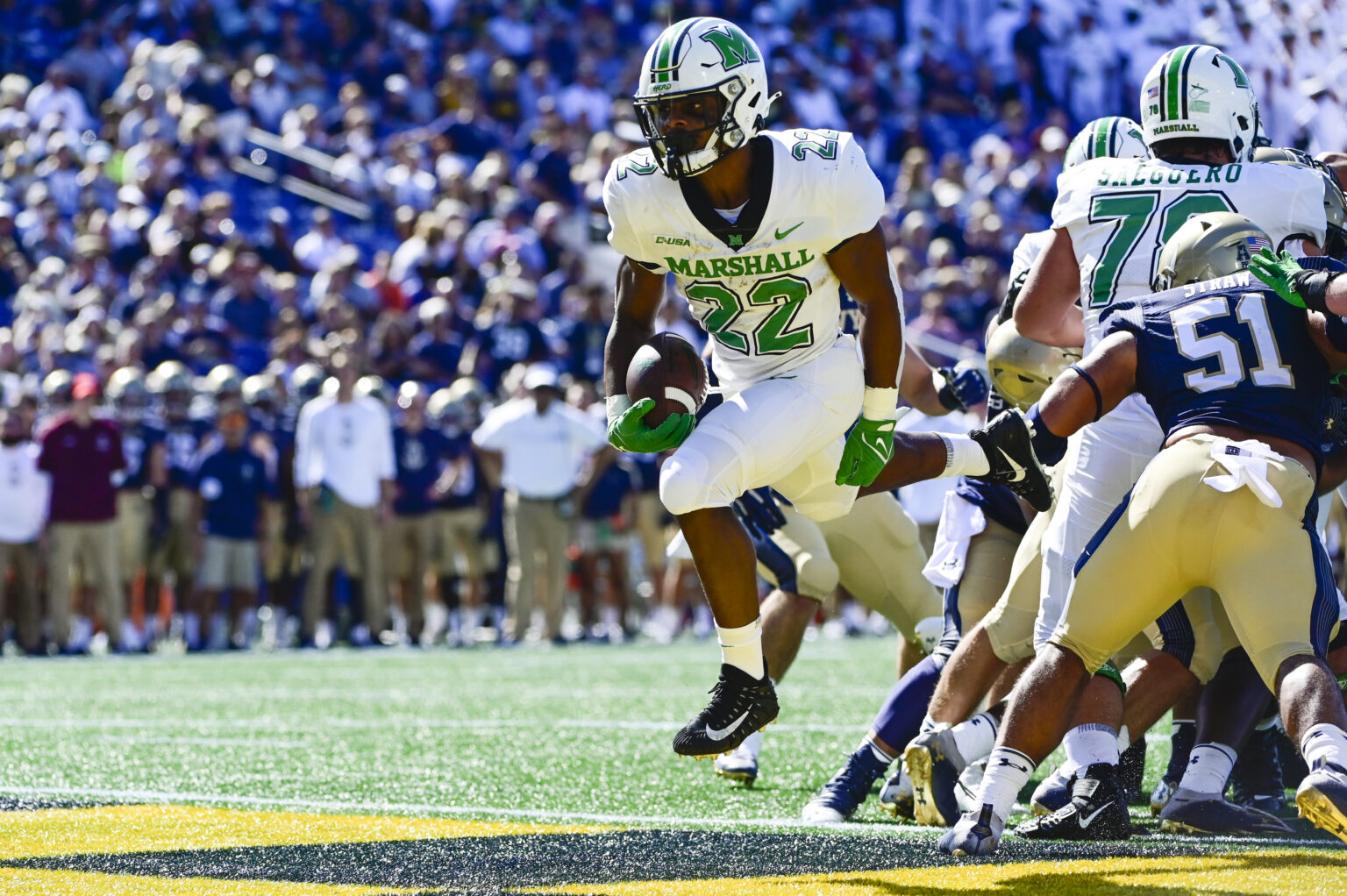 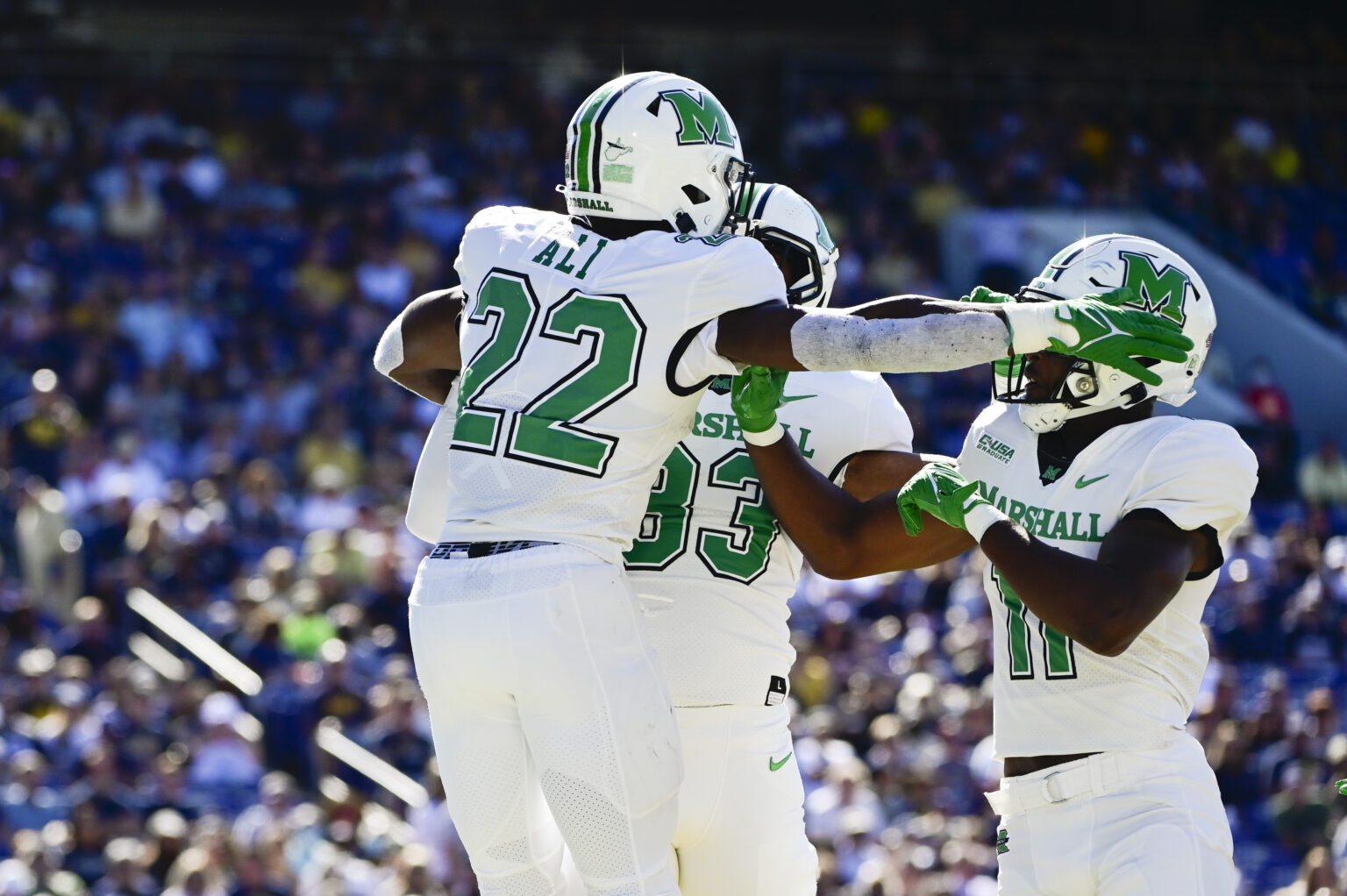 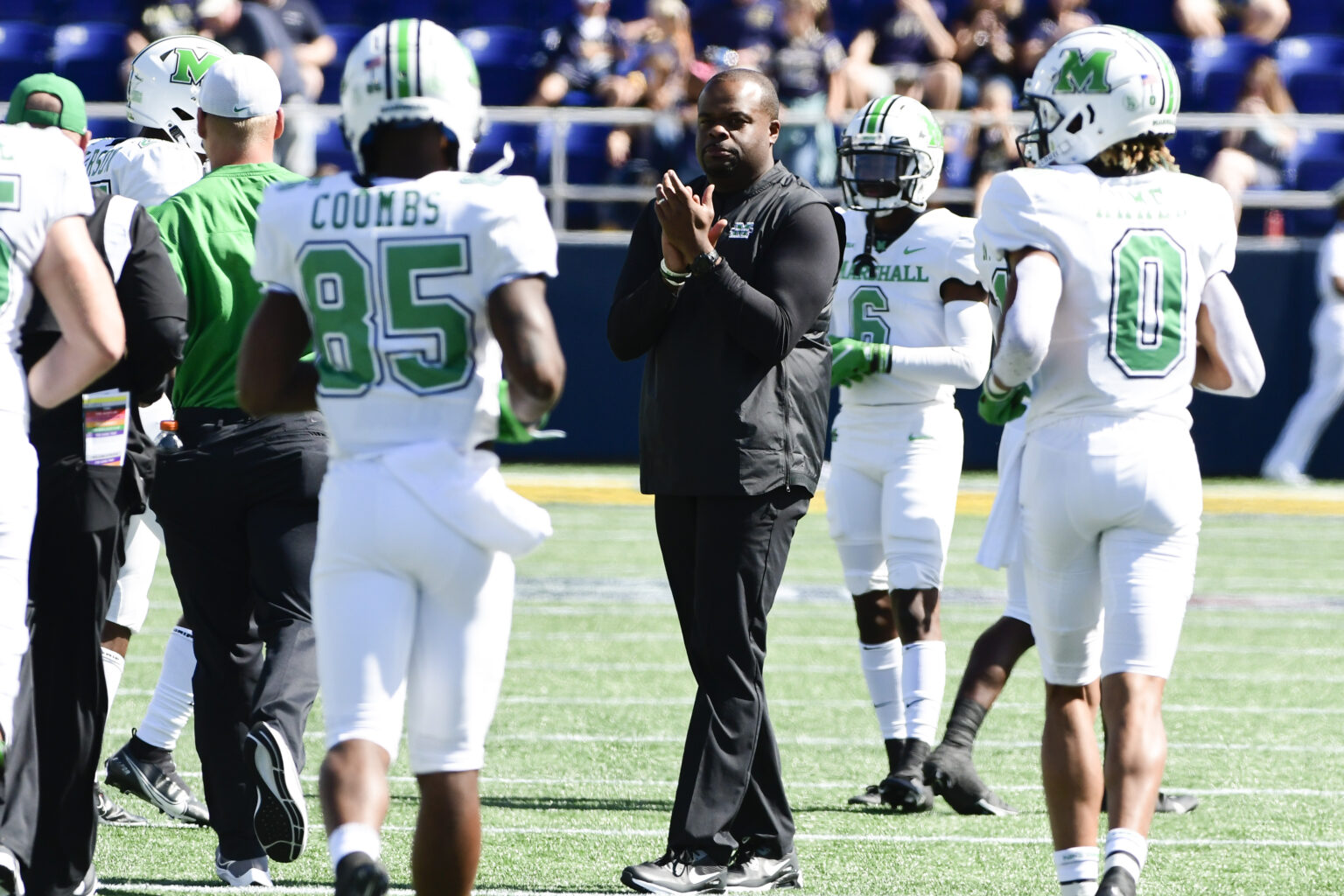 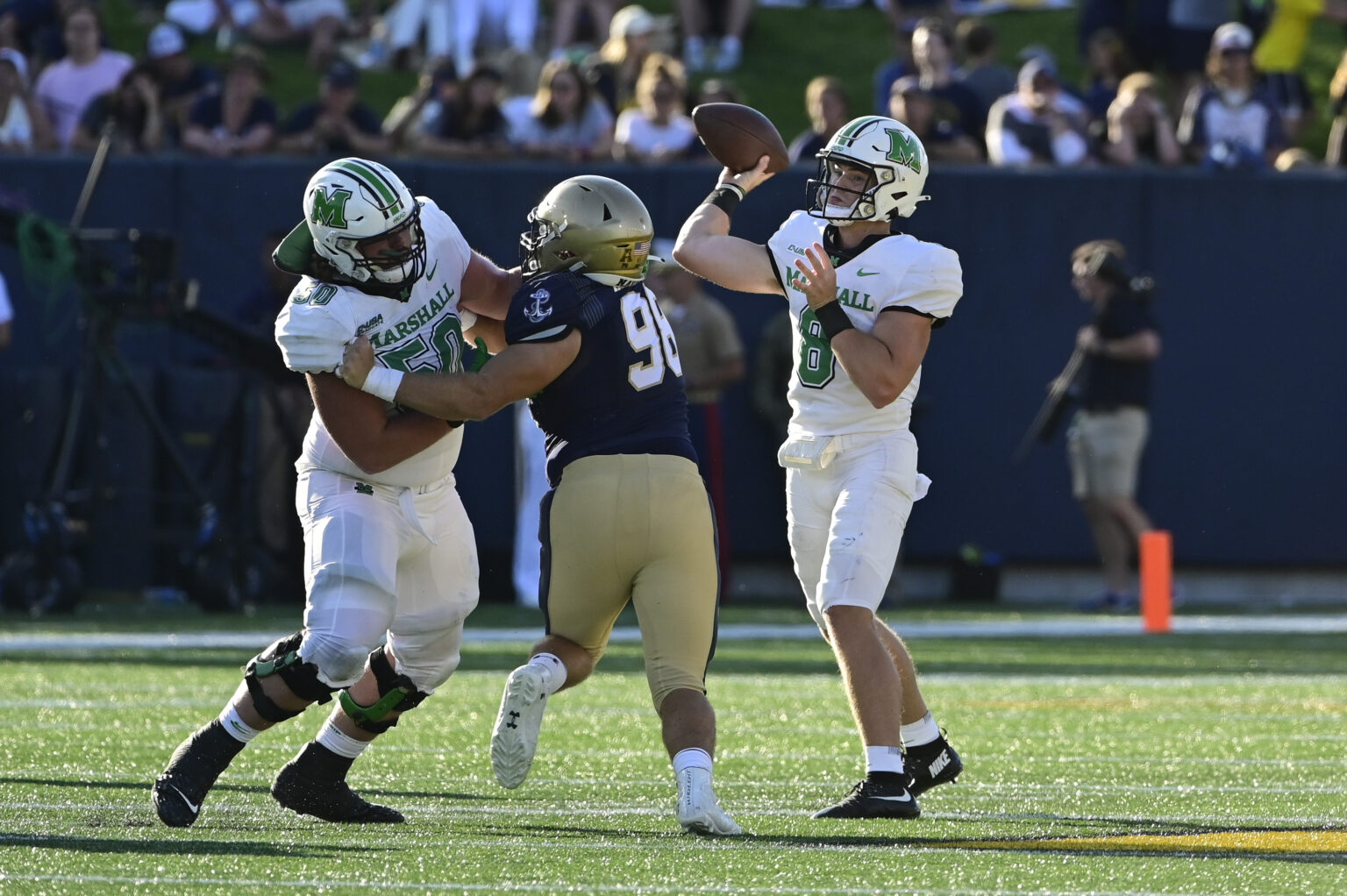 A complete performance on both sides of the ball led to the Thundering Herd rolling past Navy, 49-7, at Navy-Marine Corps Stadium.

Quarterback Grant Wells threw the ball all over the field, while Talik Keaton and Corey Gammage combined for 12 catches and nearly 200 yards. Tailbacks Rasheen Ali and Sheldon Evans teamed up for six scores.

The defense was equally impressive and contained the Navy option attack and recorded nine sacks. MU’s special teams were also strong and had a blocked field goal and punt.

Marshall has now win nine straight openers, with the victory over Navy coming in front of 31,101 in the first meeting between the two schools.

Huff is the first Herd head coach to open on the road and win. Kemper Shelton began his career in 1922 with a scoreless tie at Marietta, according to Chuck McGill of HerdZone.com.

Ali, a freshman, got the first of his four scores to cap Marshall’s opening drive that covered 75 yards and took nine plays. From that point, it was all uphill for Navy, picked to finish eighth in the American Athletic Conference.

Ali’s other TD runs covered 3 yards, 4 yards and 1 yard. He is the first Herd player to rush for four scores since Devon Johnson in 2014 against Florida Atlantic.

Keaton finished with five catches for a career-best 100 yards and Gammage, the team’s leading receiver a year ago, snagged seven passes for 94 yards. Those numbers are career-highs.

Navy and its option-oriented attack piled up 337 rushing yards and 41:19 in time of possession, but scored just once, with 12:04 left. There was a blocked punt and field goal as well.

The second half was a repeat of the first for Marshall, which went 6-for-6 in the red zone.

Linebacker Eli Neal led the defense with 11 tackles and a career-best three sacks. The nine sacks are the second-most in program history. The Herd defense also racked up 13 tackles for loss.

Navy didn’t score until its 10th drive of the game.

Thanks to three touchdowns in the final period, the 42-point margin of victory is the highest in program history against a Football Bowl Subdivision team. The previous high was 38 in the 2013 opener against Miami (Ohio).

Marshall returns to action next Saturday against North Carolina Central in it home opener at Joan C. Edwards Stadium. Kickoff is 6:30 p.m.

Navy is now 7-7 overall in season openers and 5-2 in home openers under coach Ken Niumatalolo. The Midshipmen play the third toughest schedule in the country based on opponent winning percentage in 2020.

Former Naval Academy Athletic Director and Marshall football coach Jack Lengyel was honored at Saturday’s game. Lengyel was part of the coin toss and recognized at the first media timeout.

Lengyel took over the Marshall football program 50 years ago this year after the tragic Southern Airlines crash on Nov. 14, 1970, that killed all 75 people on board following the Herd’s game at East Carolina. It has been recognized as the worst sports-related air tragedy in U.S. history. Lengyel served as Navy’s first civilian athletic director from 1988-2001.