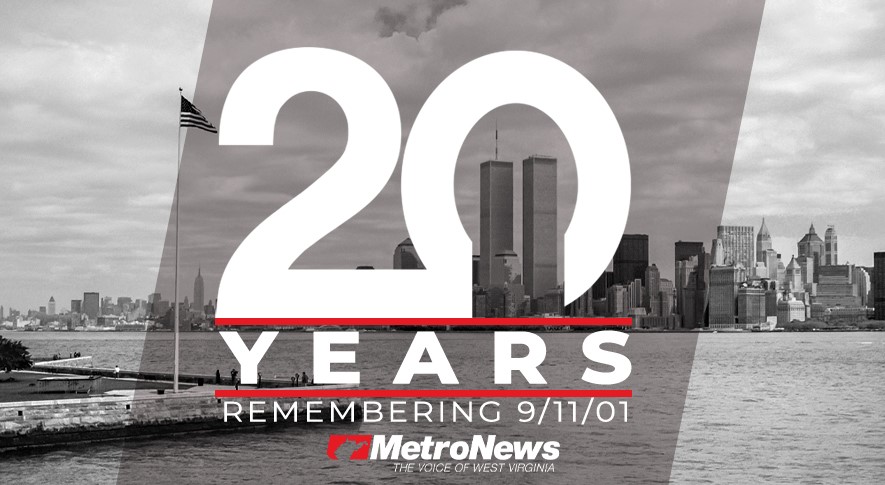 CHARLESTON, W.Va. — The 20th anniversary of the most deadly attack on American soil is being remembered in a variety of ways in West Virginia.

First responders will gather in several communities to mark the events of Sept. 11, 2001.

In Kanawha County, a group of fifth graders at Shoals Elementary School will read the names of 50 of those who died that day in the attacks on the World Trade Center.

“We received 50 names out of the 2,983 souls lost and we’re going to be reading those 50 names with a short biography,” Haley Hathaway, 5th-grade teacher told MetroNews.

The ceremony will include the raising of flags, singing of The National Anthem by 5th-grade students, guest speakers including Kanawha County School Superintendent Tom Williams and the name reading. David Anderson, the principal of Shoals, said every student will be wearing shirts that say ‘Never Forget’ with the date on it.

The two largest events of the day will be football games at WVU and Marshall. Observances of the 9/11 anniversary are scheduled. Former Mountaineer quarterback Chris Gray died in the WTC attack while Huntington native Dr. Paul Ambrose was killed when the plane he was on crashed into the Pentagon.

Ambrose’s life will be marked with a fitness event in Huntington Saturday.

The state’s official ceremony will come at 11 a.m. with a virtual event streaming on the governor’s office website.

“It’s hard to imagine that it’s been 20 years,” Gov. Jim Justice said Friday. “It was a beautiful, quiet, blue-sky day. And then, all of a sudden, America was under attack.”

Justice has ordered state flags to fly at half-staff Saturday.

Those killed with West Virginia ties in addition to Gray and Ambrose include:

Parkersburg native Mary Lou Hague, who was working on the South Tower. Hague was successful in business and travelled the world.

Jim Samuel, a 1993 WVU graduate and native of Jamesburg, NJ, was working in Tower One.

Shelley Marshall, the wife of Morgantown native Donn Marshall. Shelley was killed at the Pentagon, where she was a budget analyst for the Defense Intelligence Agency.

West Virginia Wesleyan College graduate John William Farrell, known by his close friends as “Huck.” Farrell was in the South Tower where he was working as a trader for Sandler O’Neil & Partners.

What West Virginians and those associated with the state are saying about the 20th anniversary of 9/11.

“Today we honor and remember those we lost 20 years ago on September 11, 2001. So many innocent Americans died that dreadful day, and so many Americans have given their lives in defense of our nation in the years since. Words cannot describe my gratitude for our first responders, police, members of our armed forces and hospital staff.

“The most important thing we can do, as Americans, is to honor those we have lost by sharing their stories with future generations.”

“Even though it’s been 20 years since we watched, horrified, as smoke billowed from the Twin Towers, the Pentagon, and a crashed plane in a Pennsylvania field, the memories are no less painful. Today, we remember the thousands of Americans—innocent men and women—first responders, and military members—who lost their lives in the face of pure evil on September 11, 2001. I encourage all West Virginians to take a moment to pray for the victims and their families, for everyone who faced unimaginable loss that September morning, and for those who carry their grief with them to this day. Today provides us an opportunity to not only reflect on the incredible resilience and unity our great nation displayed in the hours, days, and years following the attacks, but to ensure that same American spirit continues to live on.”

Wise was attending a conference for southern governors in Frankfort, Ky. that morning when he watched the towers fall on his television.

“I immediately jumped in a State Police car and we began racing back to Charleston,” Wise told MetroNews.

Wise said his top priority was to identify potential targets that could threaten West Virginia.

“We began positioning police, National Guard and others. For instance, at the chemical facilities, Charleston and other areas have a large amount of rail lines that cross through,” he said.

“I hope this anniversary gives us an opportunity to return to first principals,” Gee said at a Friday service in Morgantown. “The principals are kindness and liking each other and being supportive of each other no matter our views.”