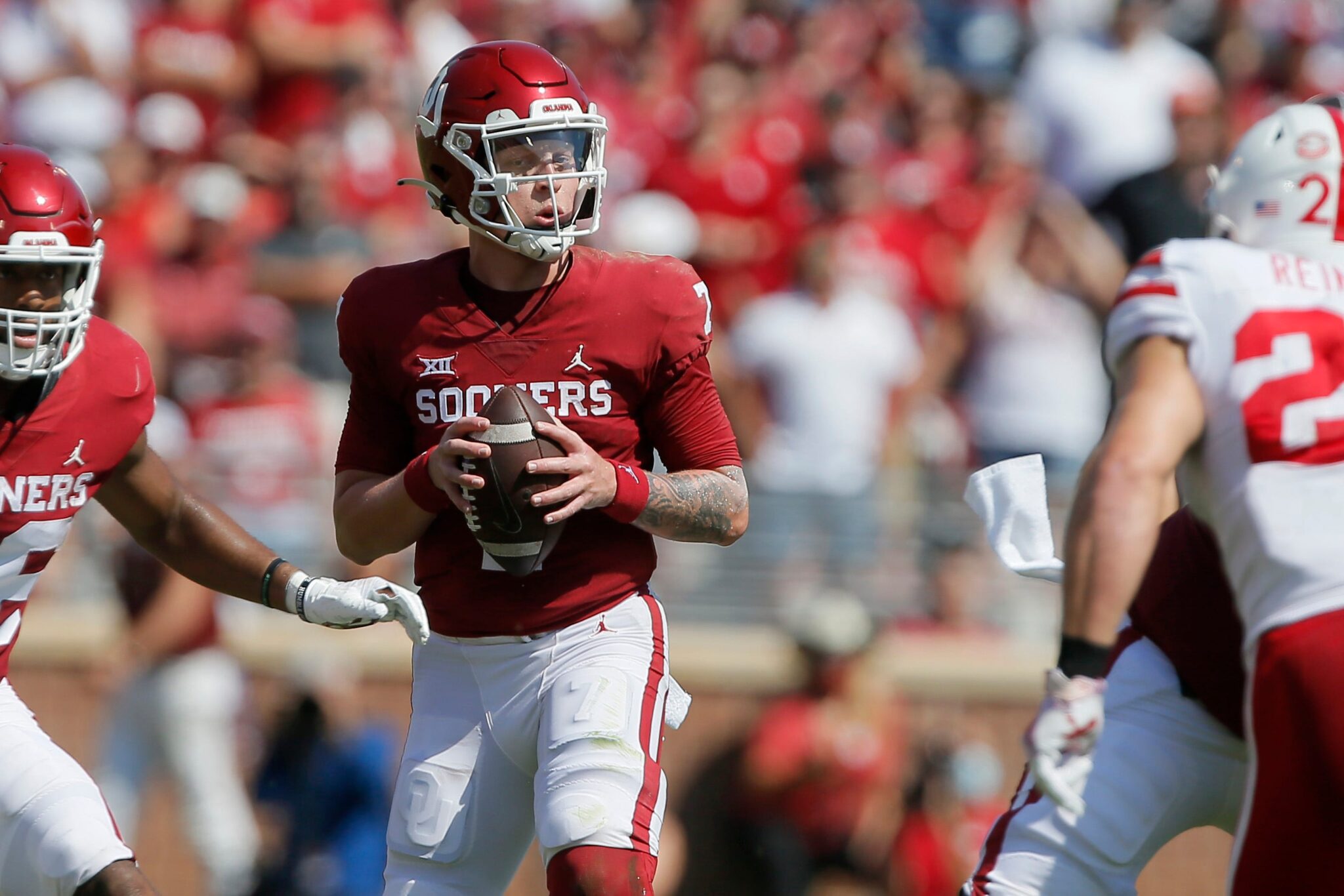 Oklahoma's Spencer Rattler (7) drops back to pass during a game against Nebraska at Gaylord Family-Oklahoma Memorial Stadium in Norman, Okla.

MORGANTOWN, W.Va. — For West Virginia to have a chance at defeating No. 4 Oklahoma for the first time since joining the Big 12 Conference, the Mountaineer defense will need to slow down preseason Heisman candidate Spencer Rattler.

Through the first three games of 2021, Rattler, the Sooners’ sophomore quarterback, has connected on nearly 75 percent of his passes and thrown for 761 yards and seven touchdowns.

The Phoenix native possesses a skill set that requires a defense to be prepared for anything.

“You have to figure out how you can get a guy off schedule,” said WVU defensive coordinator Jordan Lesley. “We know how talented he is. Our players respect it. It is no surprise how good he is. You go through and find where the strengths are, then you have to find where his weaknesses are. There are not many. It is a big challenge.”

Rattler has at least one passing touchdown in 14 straight games. Five of his seven passing scores this season came in the Sooners’ 76-0 victory over FCS member Western Carolina.

Although Rattler has combined for two touchdowns and two interceptions through the air in close victories over Tulane and Nebraska, he leads the Big 12 in five different passing categories. Rattlier is also tied for fifth nationally in completion percentage.

“Rattler is a great player,” said Jared Bartlett, WVU’s bandit who speed rushed his way to three sacks in last week’s win over Virginia Tech. “I am going to continue to do the things I do. As I continue to watch the film throughout the week, I can create a game plan and work from that.”

A year ago, Rattler completed better than 67 percent of his passes for 3,031 yards and 28 touchdowns and rushed for six TDs. He has two scores and 71 yards on the ground thus far this year.

The big-play quarterback will be up against a Mountaineer defense currently ranking first nationally in opponent red zone conversion at 36 percent. WVU has allowed the opposition inside its 20-yard line 11 times, but opponents have scored on only four of those occasions — two touchdowns and two field goals.

“They have a lot of athletic and fast guys,” Rattler said. “They have a solid defensive line. There are a lot of things with their defense we can do and execute. It looks like they have stuck to their defense throughout the year. You never know, someone could throw a curveball versus us. We have to be prepared for whatever we see.”

Something will have to give in the Big 12 opener for both teams, as Oklahoma has scored on 17 of its 18 trips in the red zone, including 16 touchdowns.

“They have a great defensive front, experienced linebackers and safeties,” said fifth-year OU head coach Lincoln Riley. “They have not missed a beat. They lost great players from last year, but they are playing at a high level. They do some great things schematically. They are challenging at all levels. It will be a good test.”