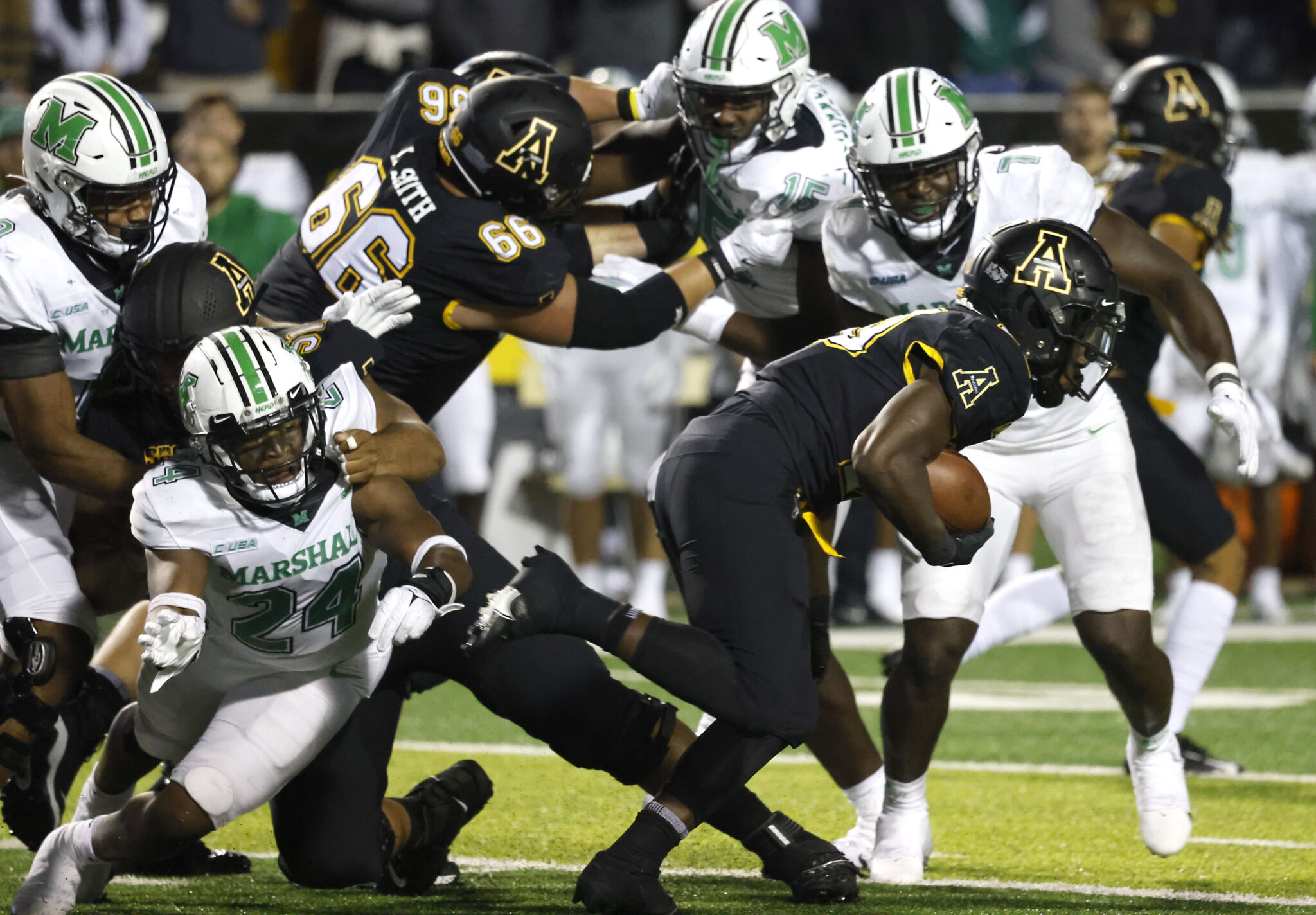 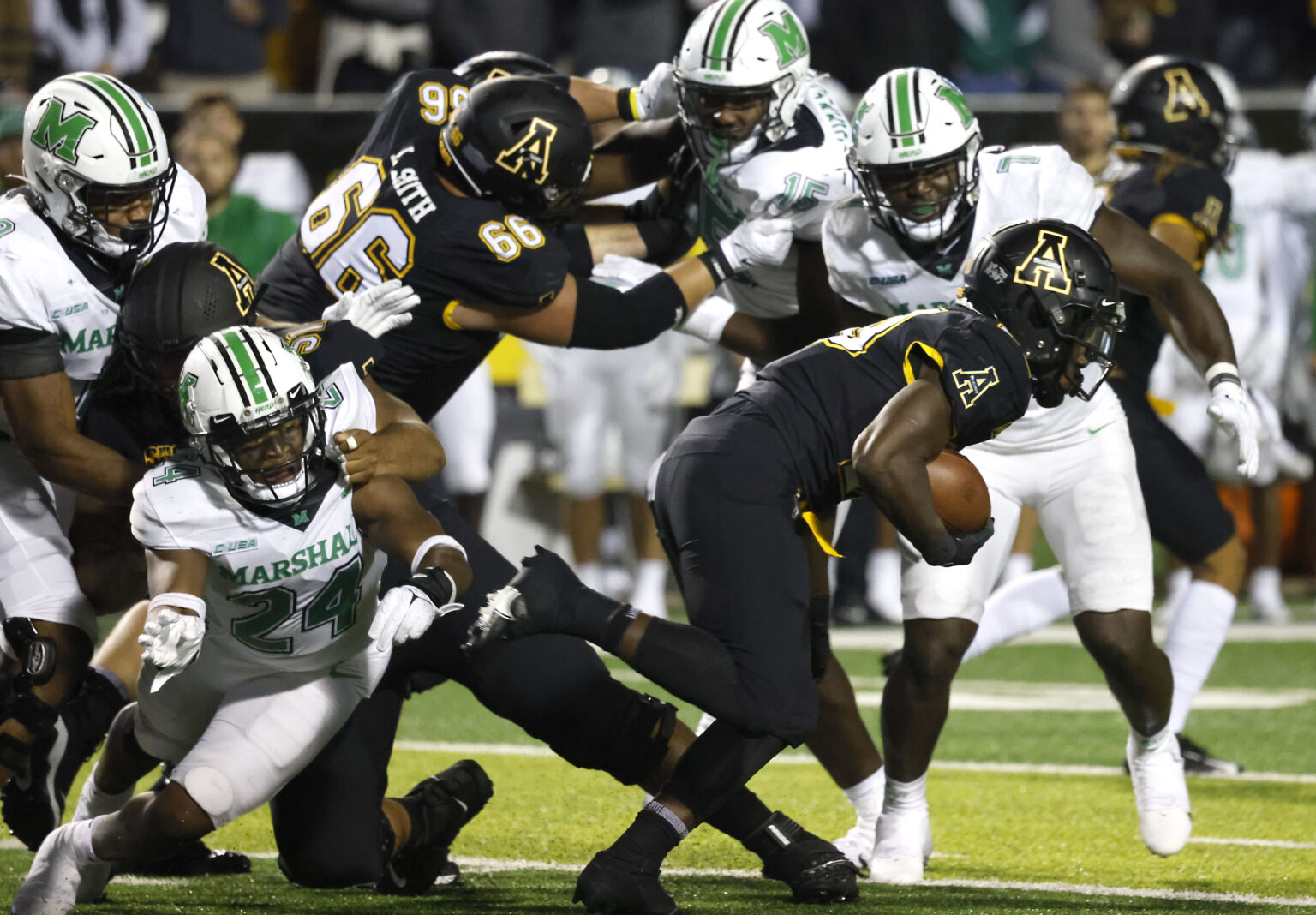 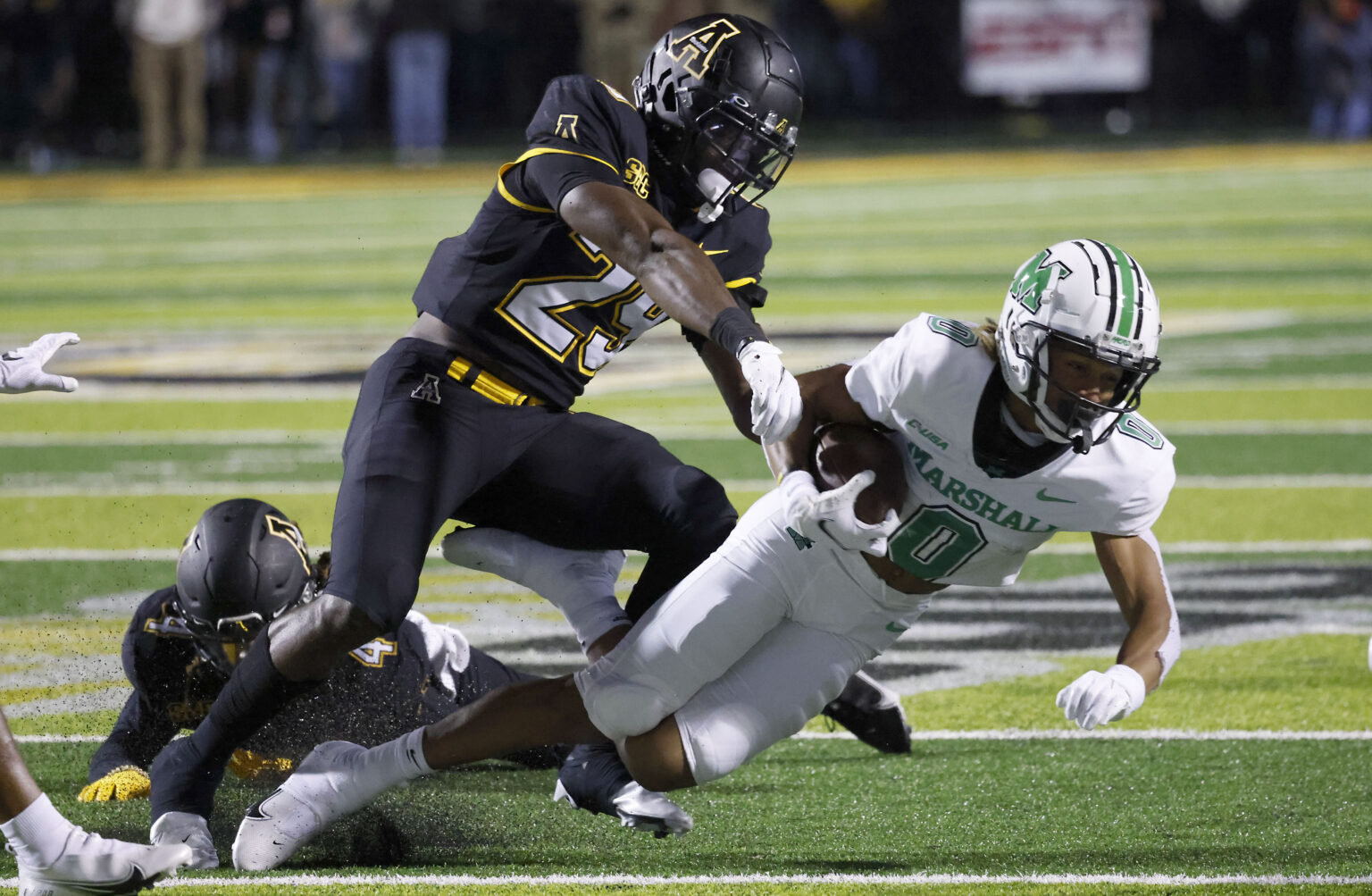 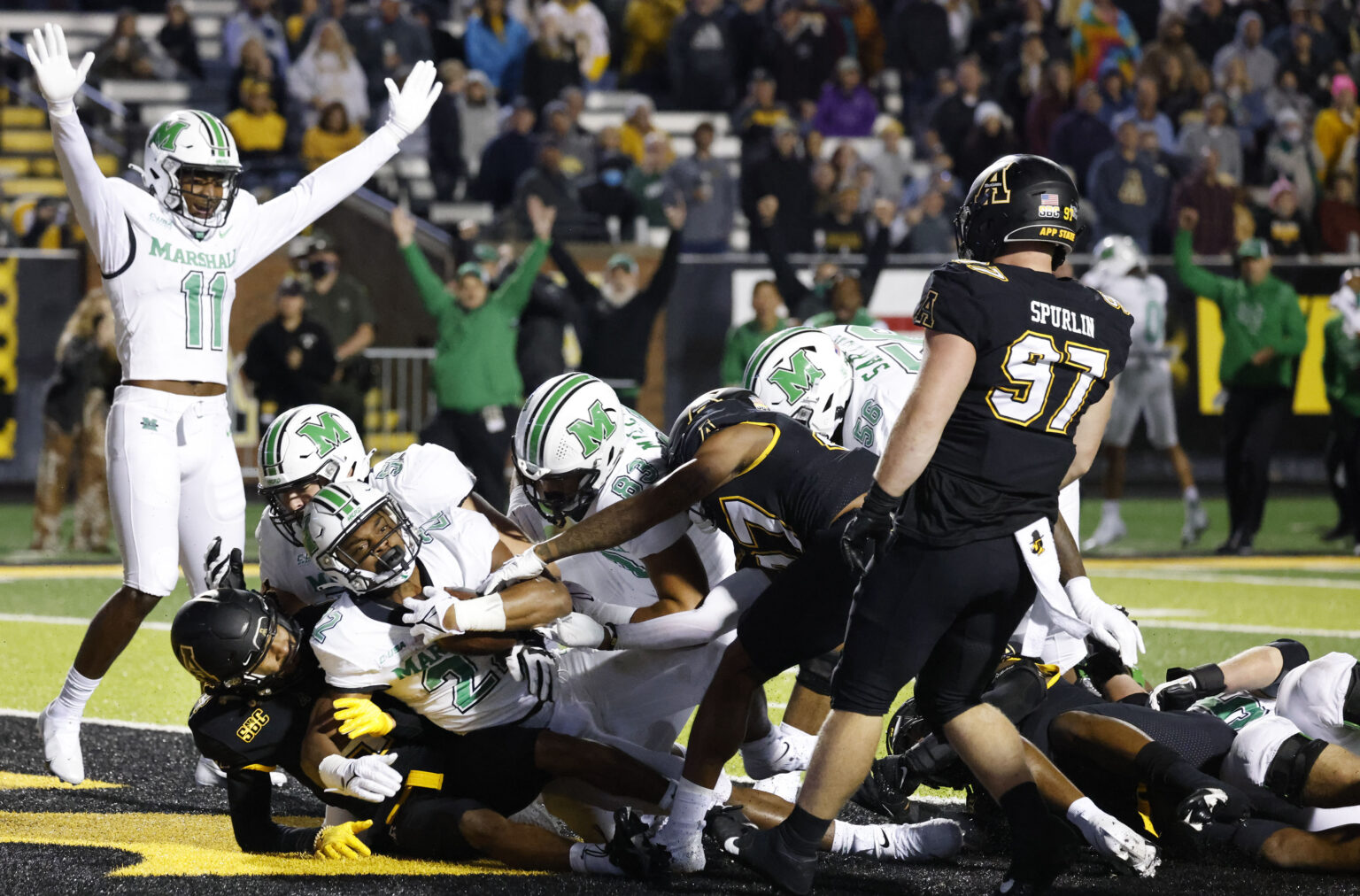 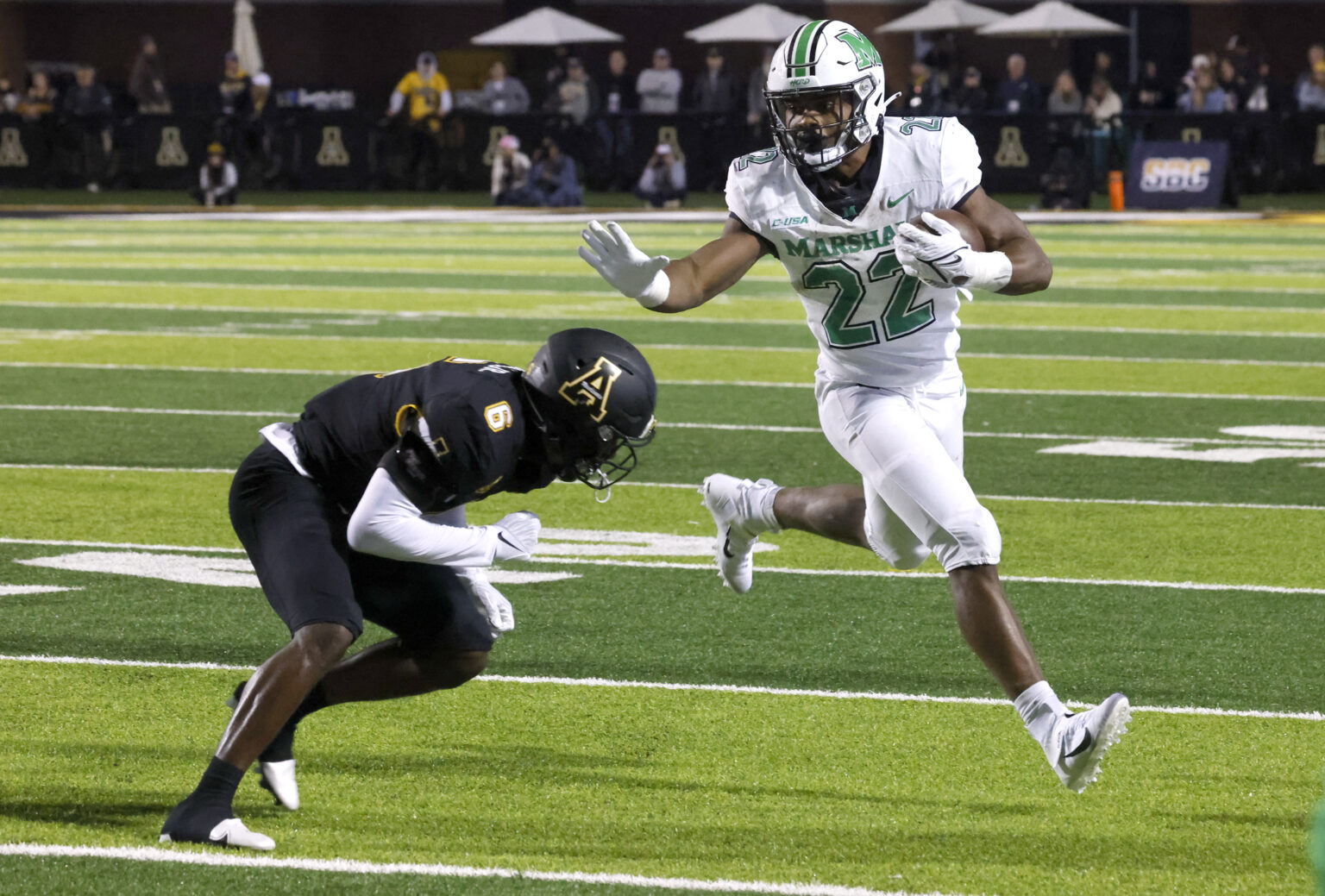 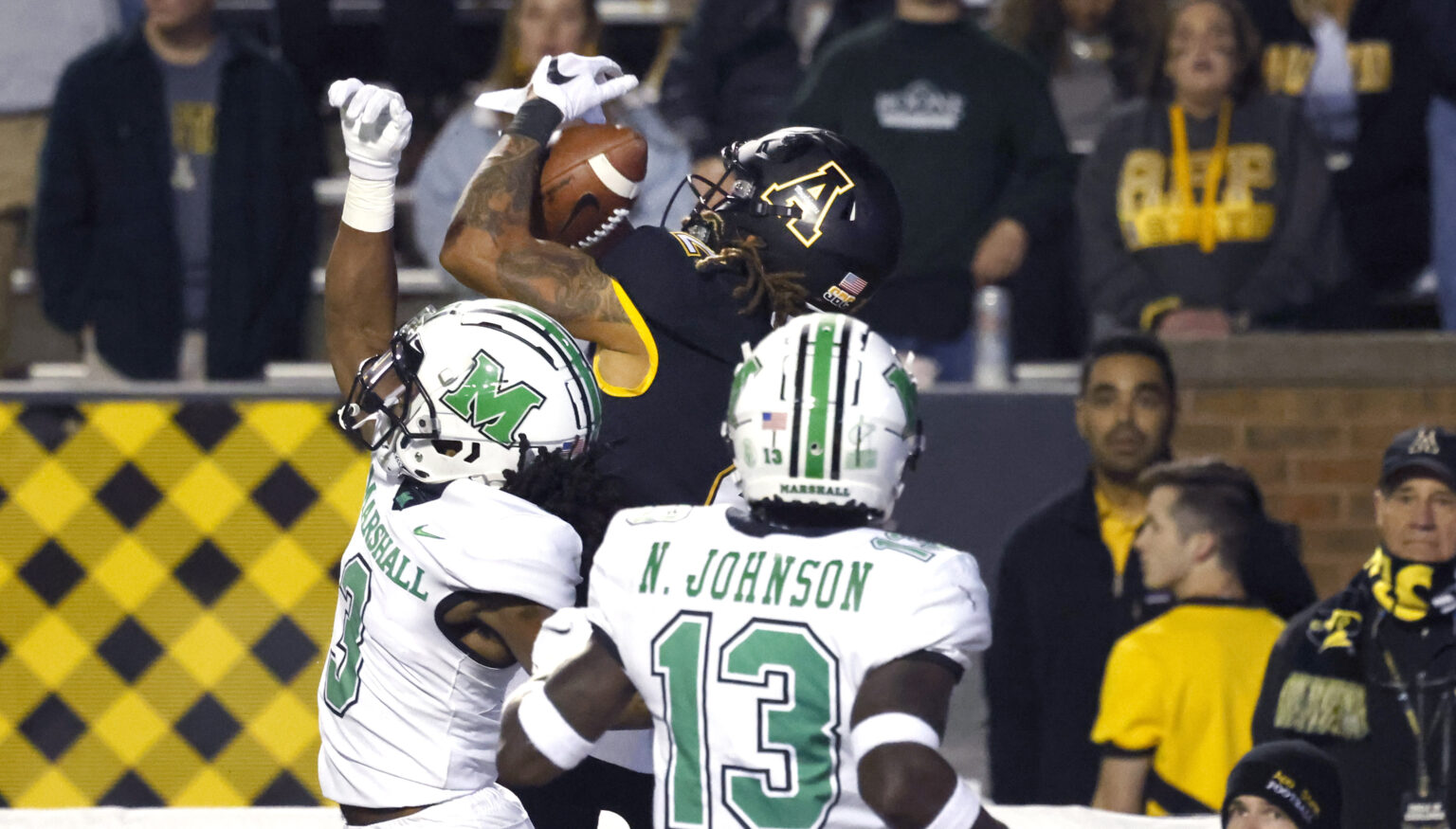 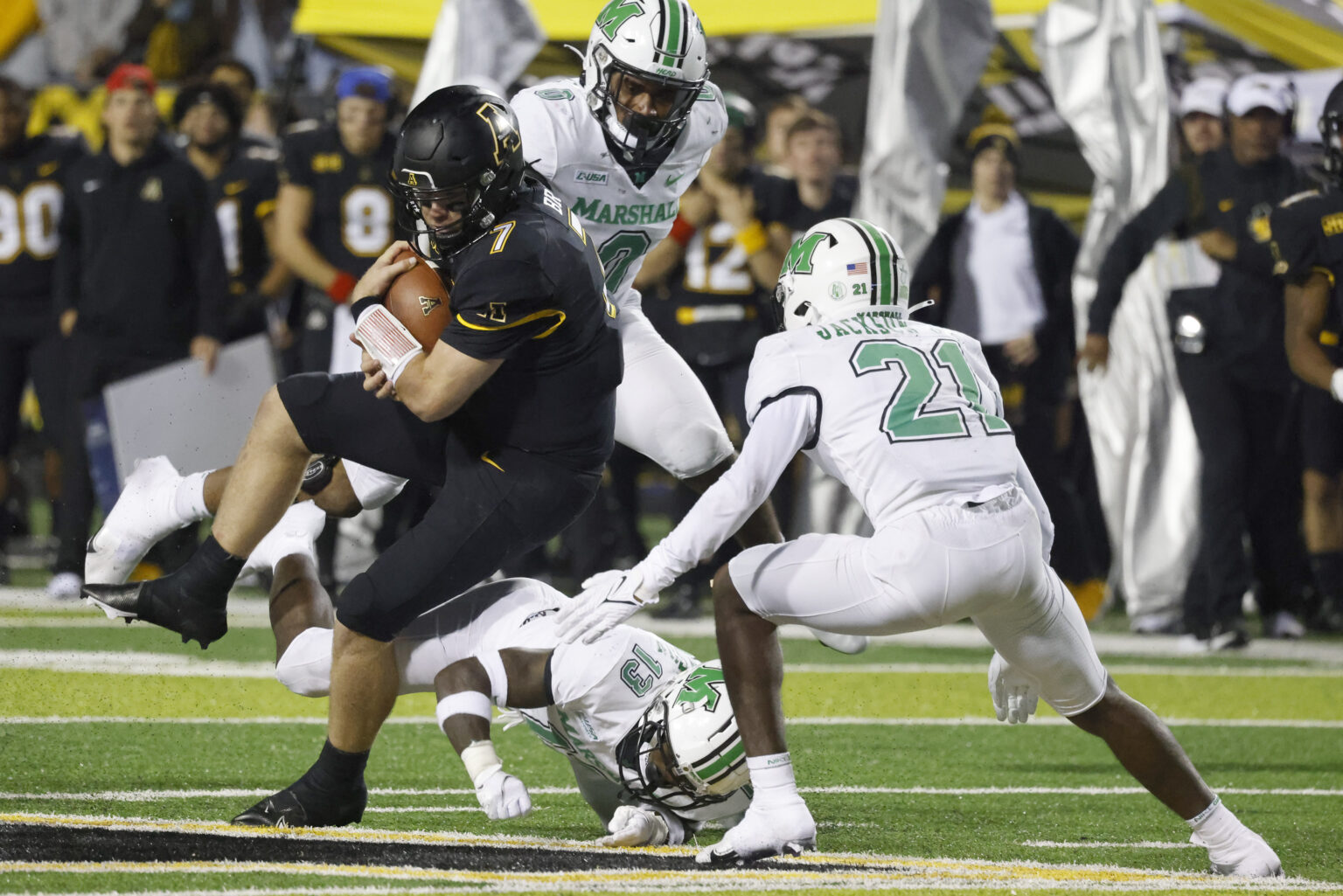 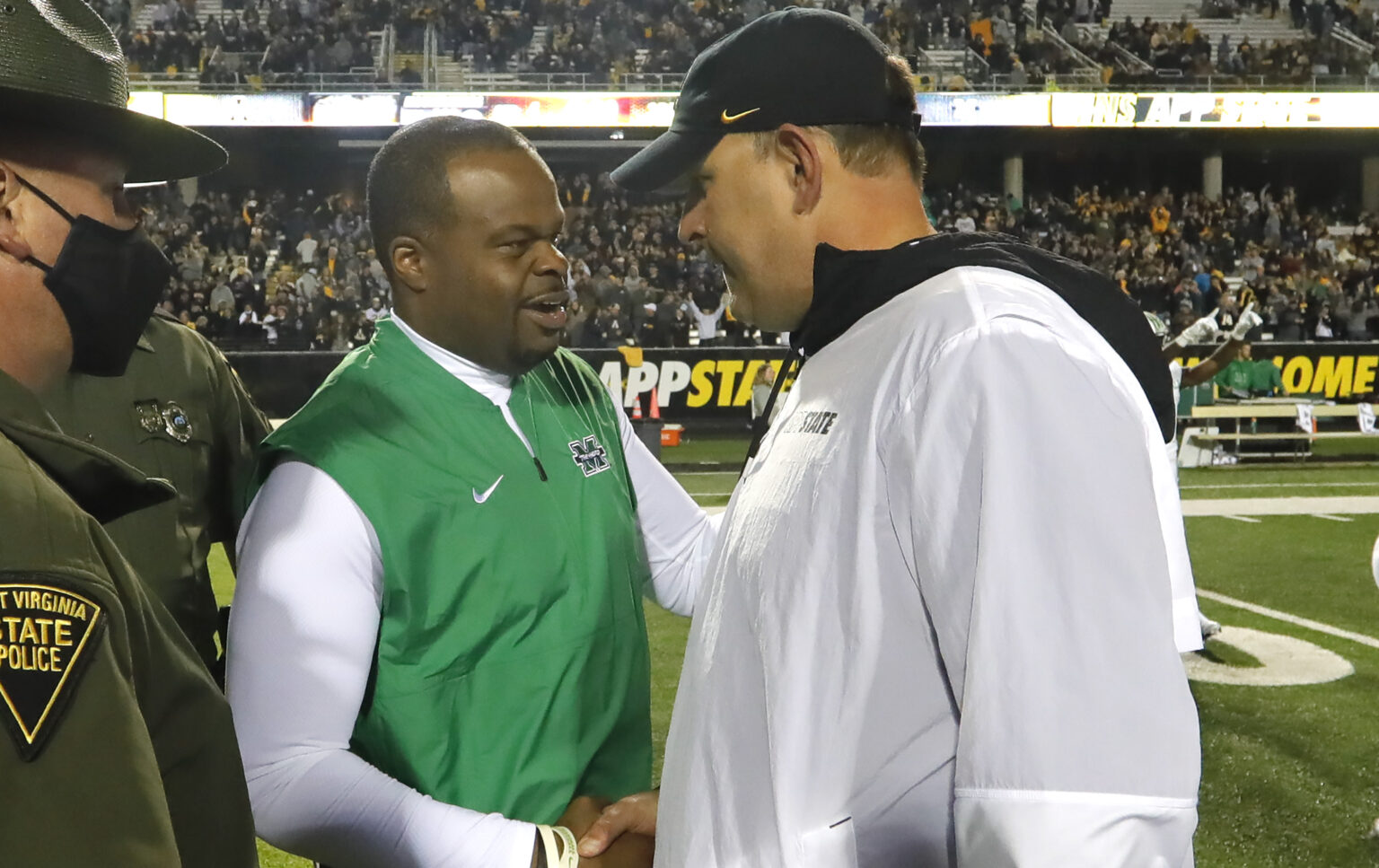 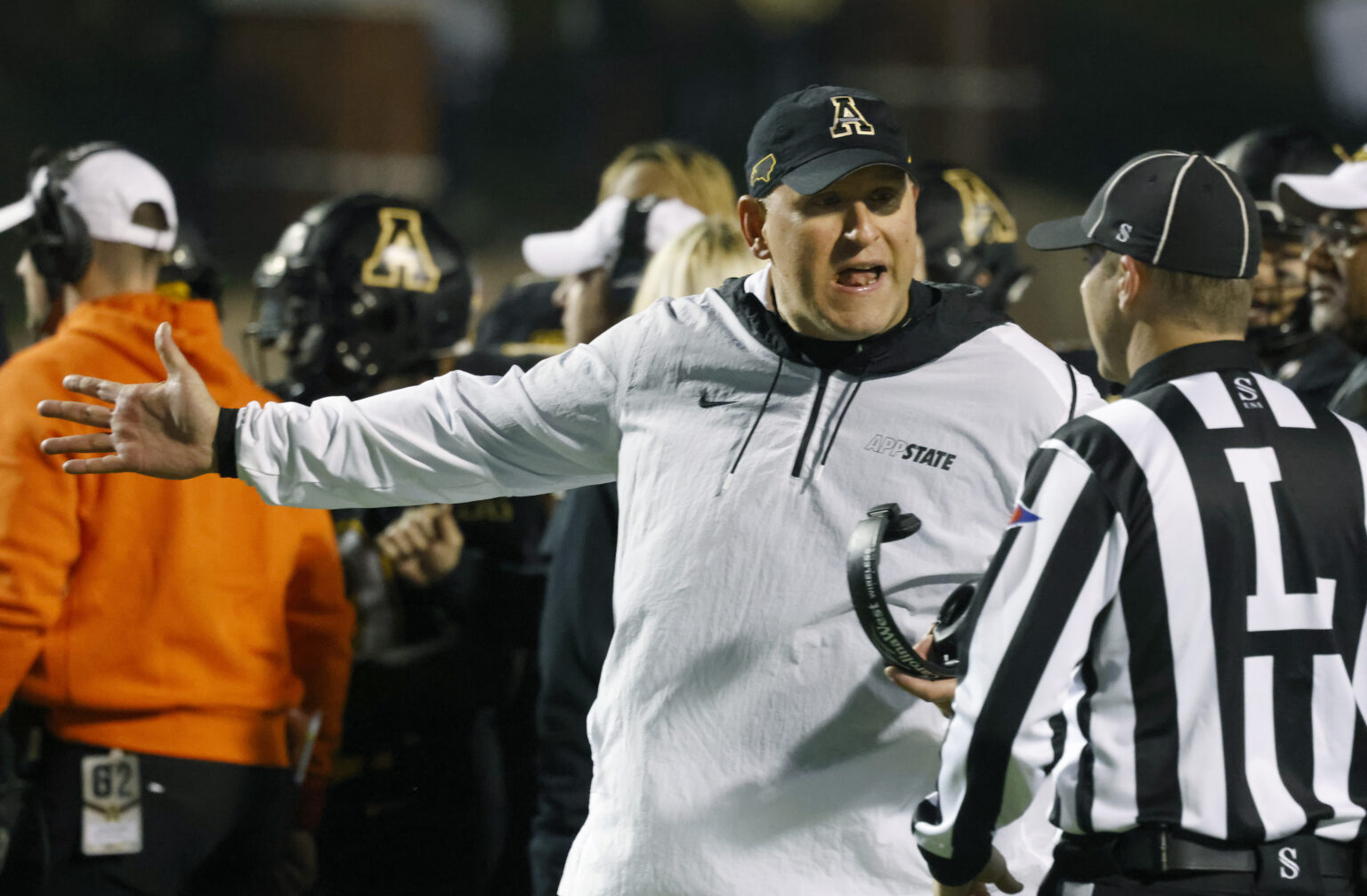 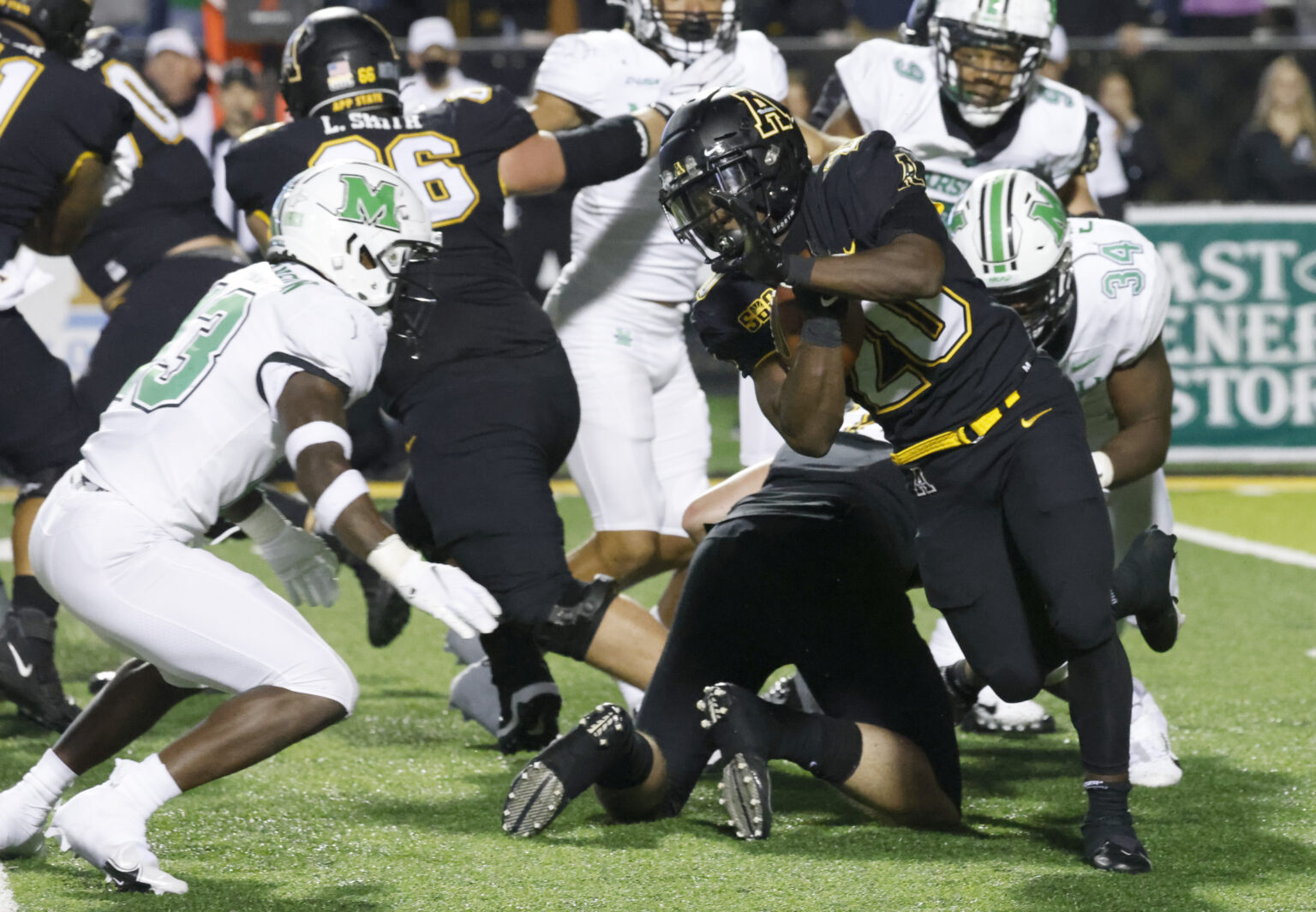 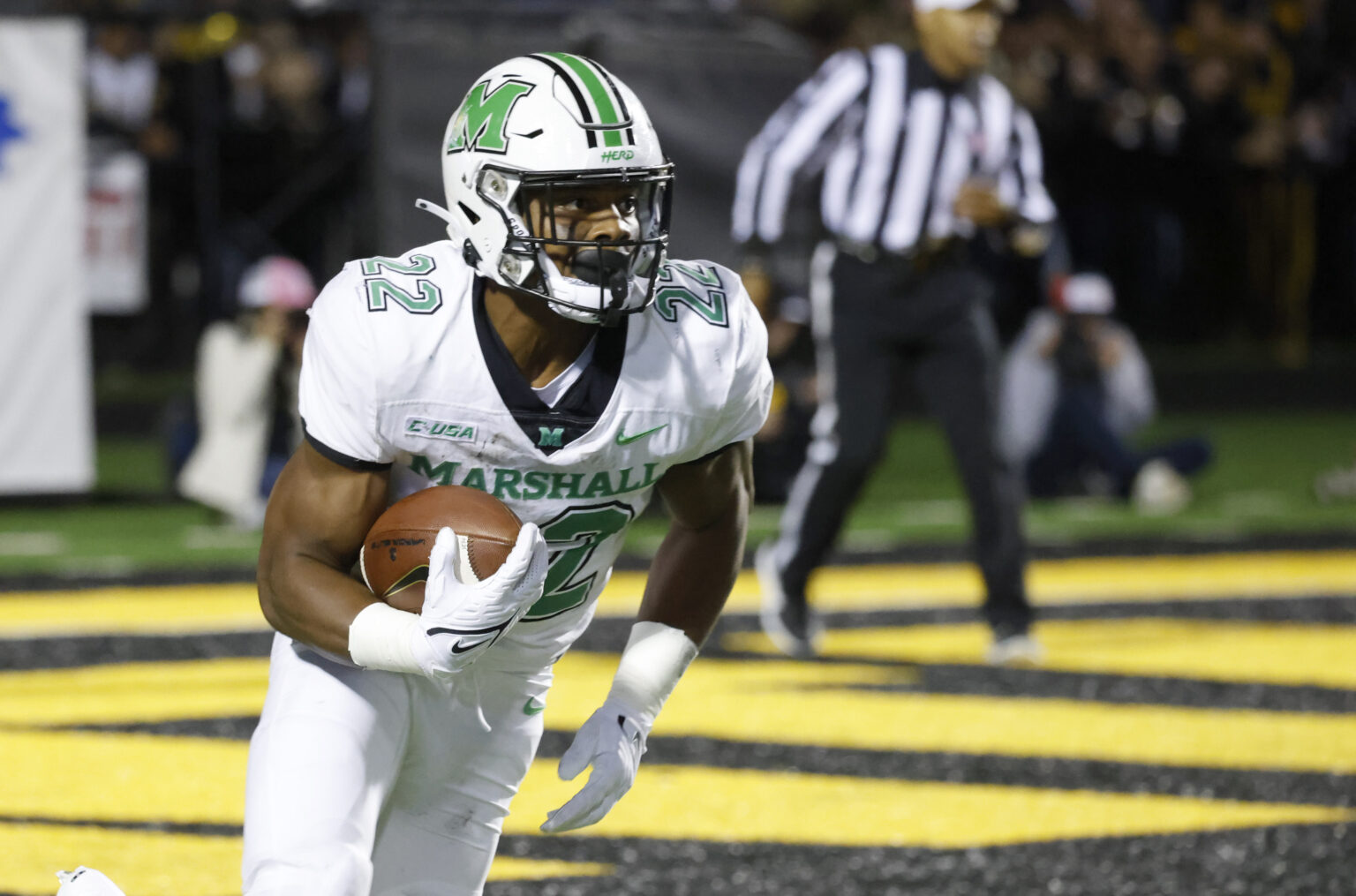 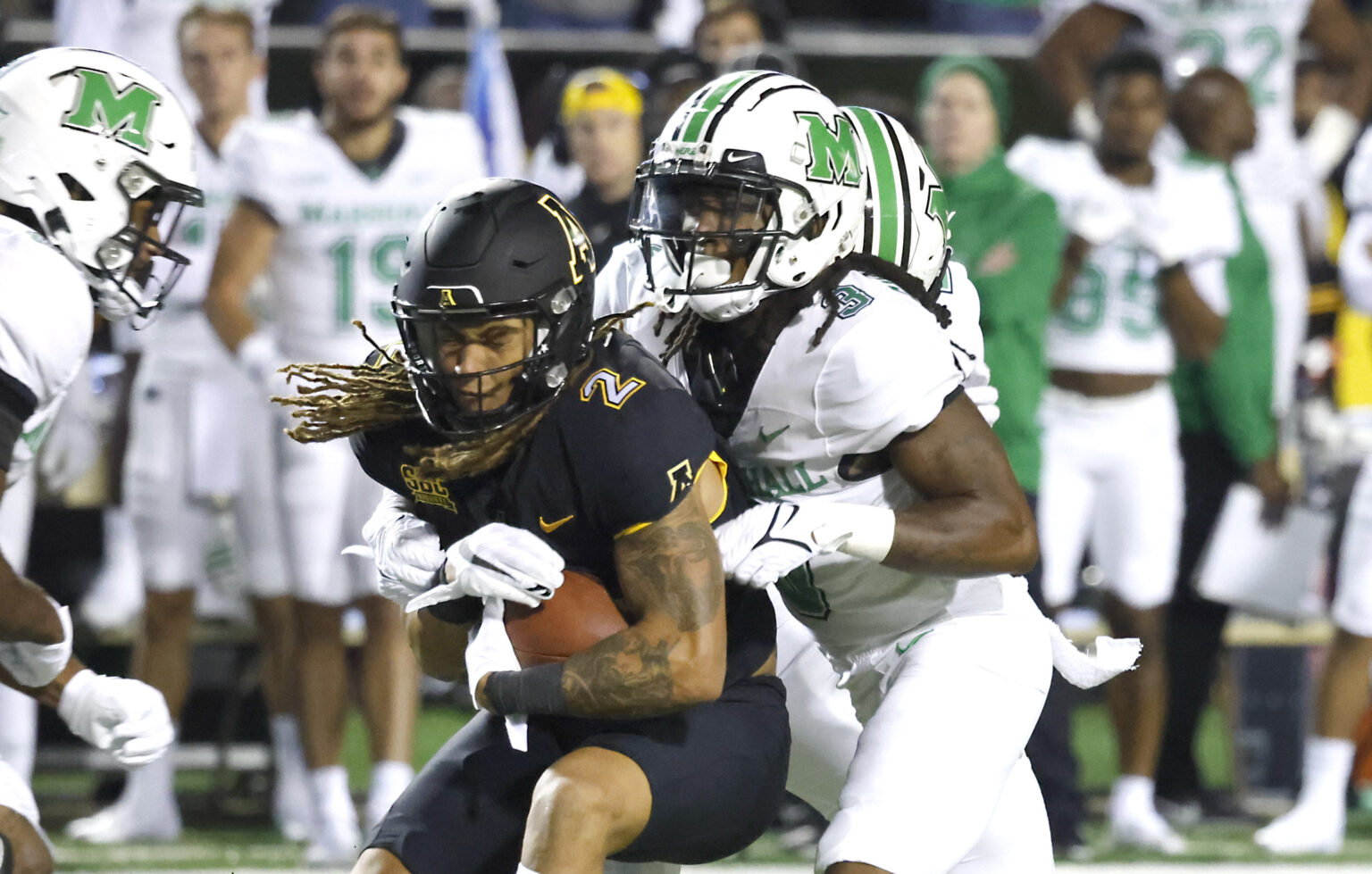 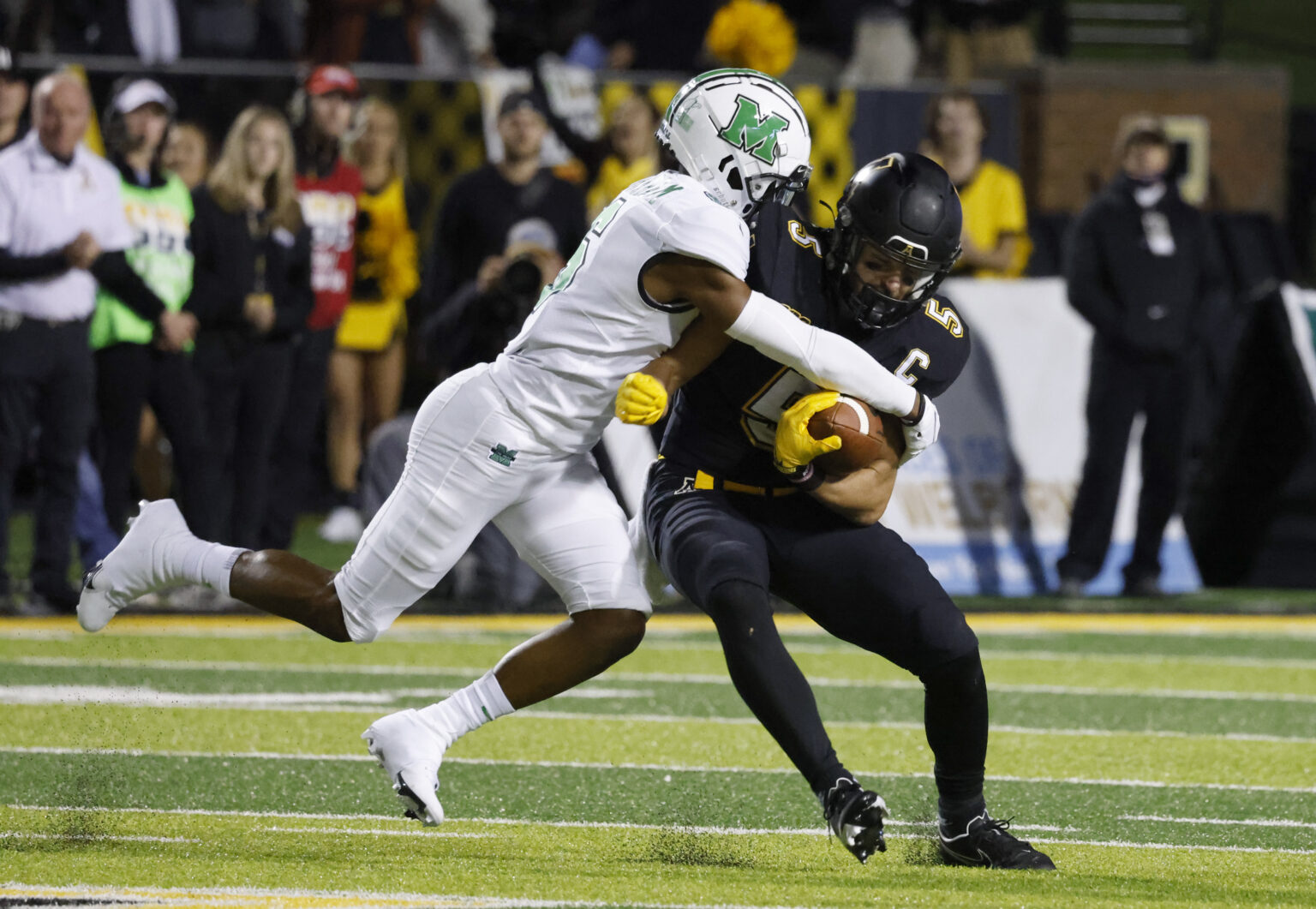 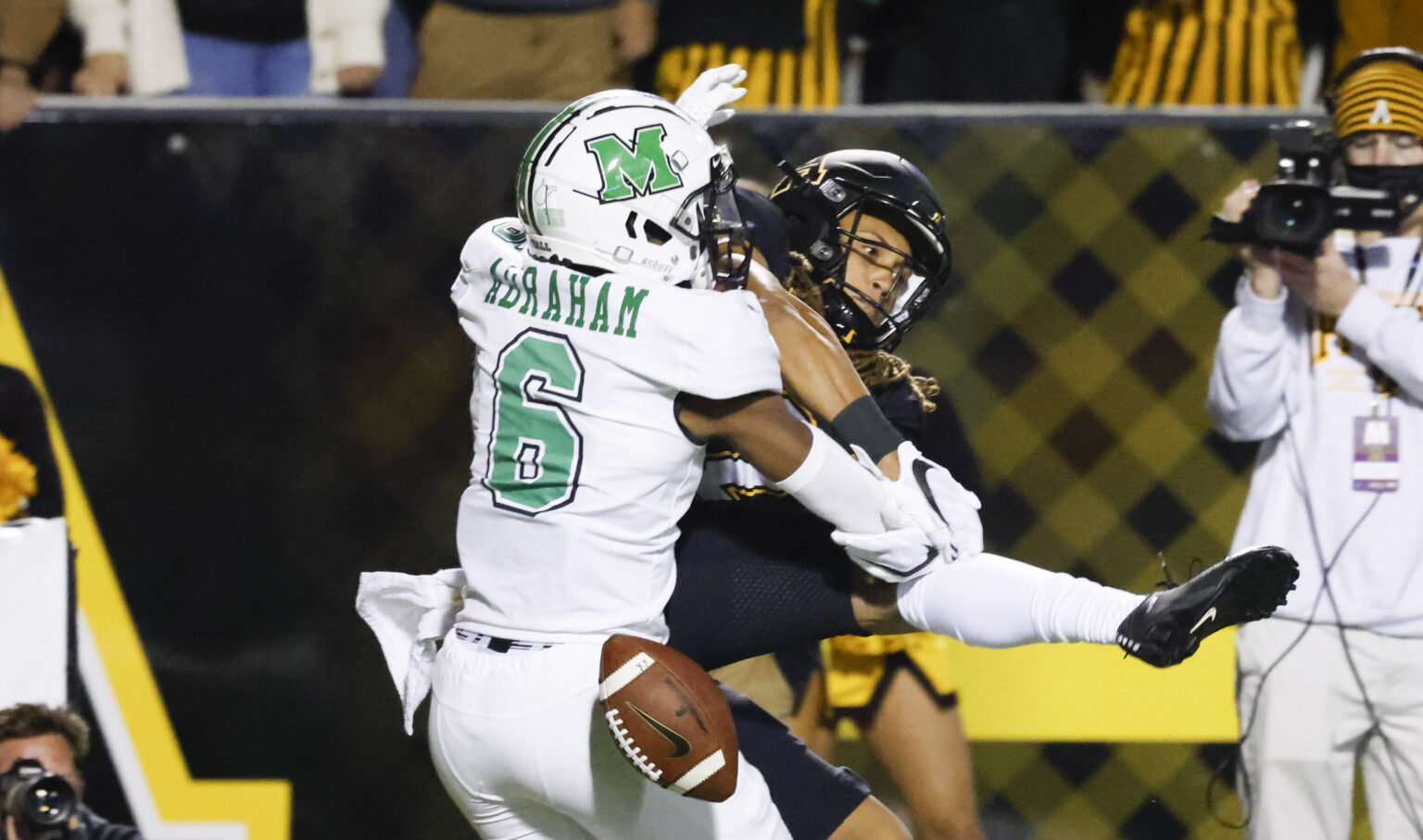 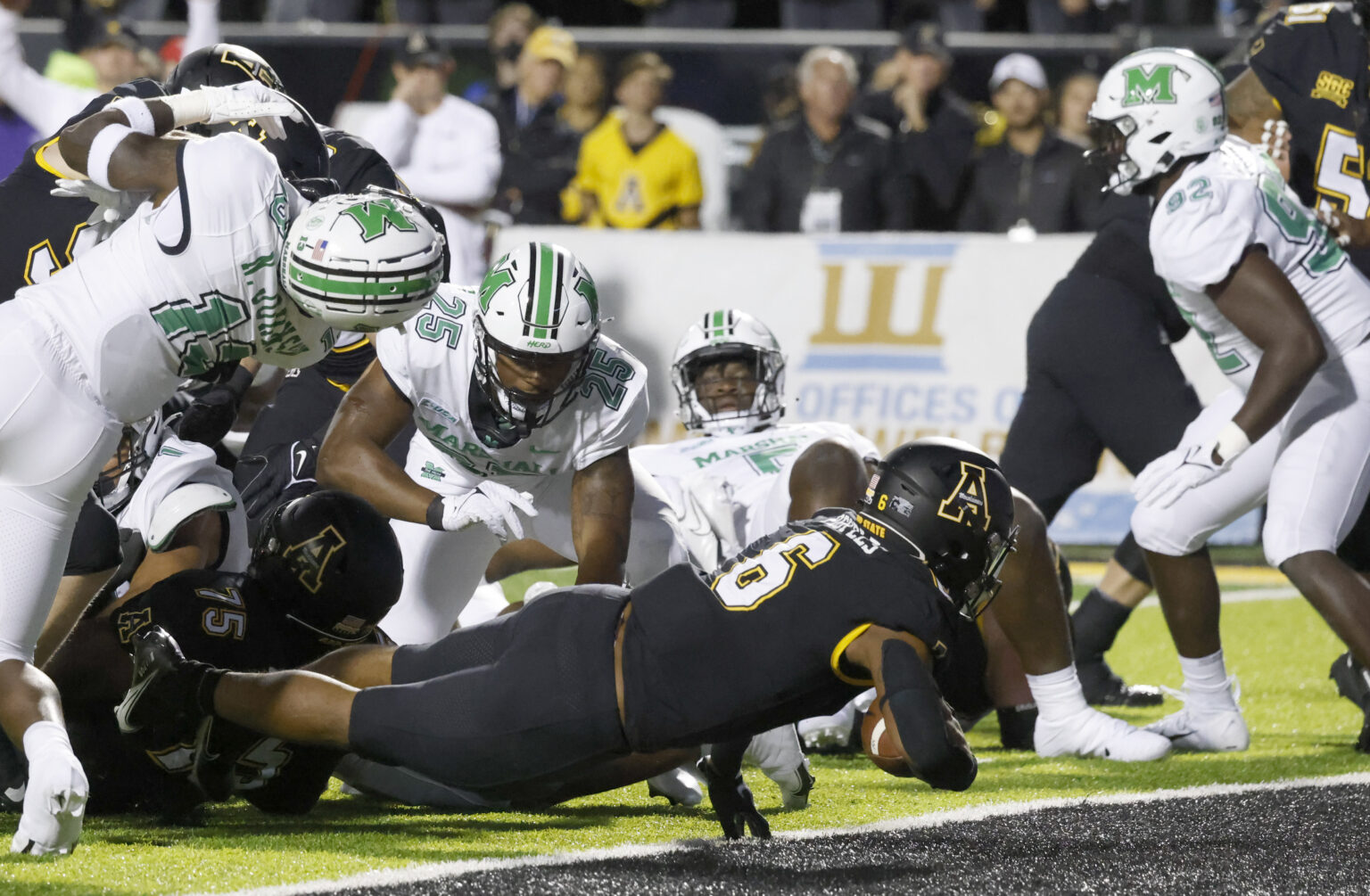 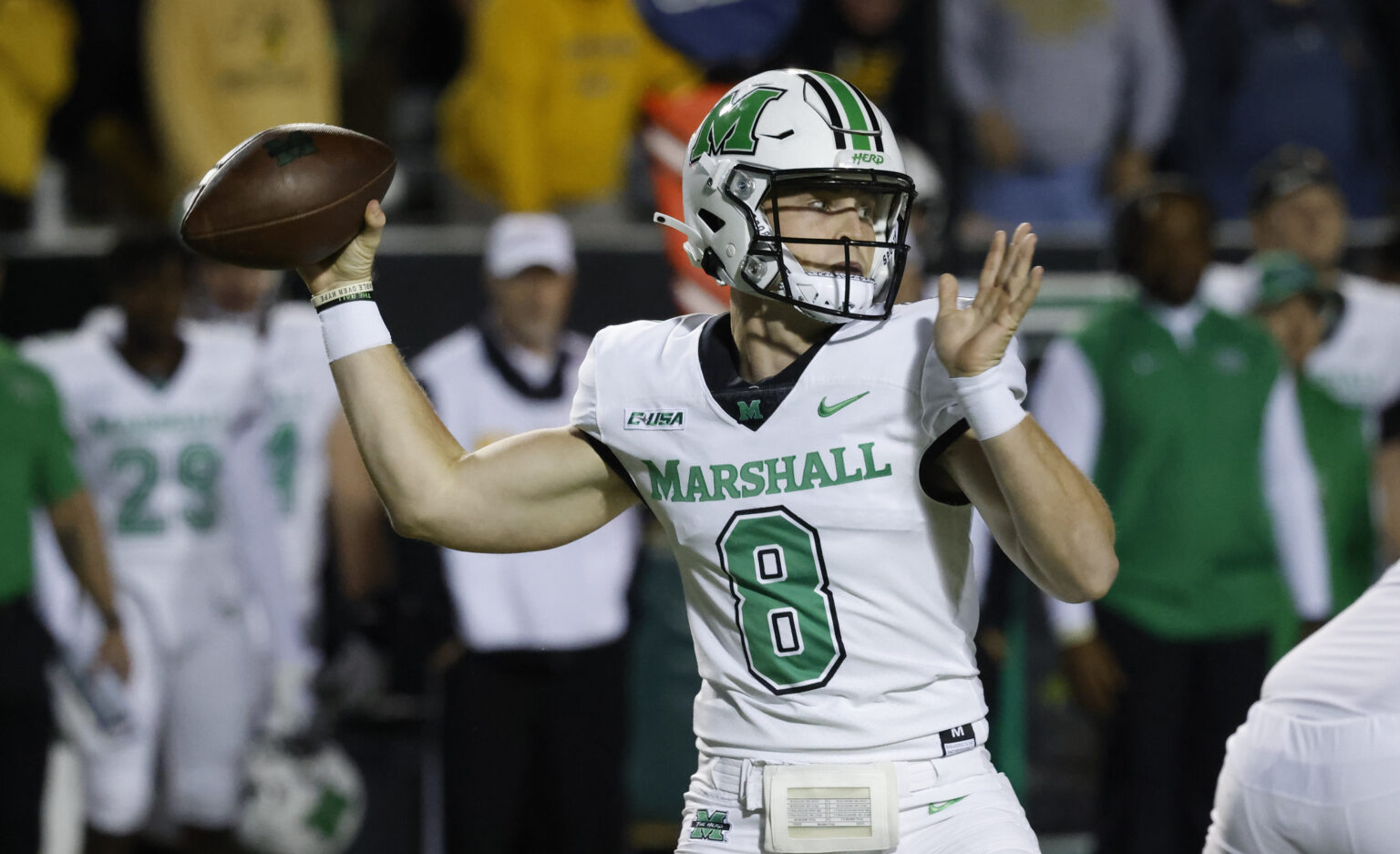 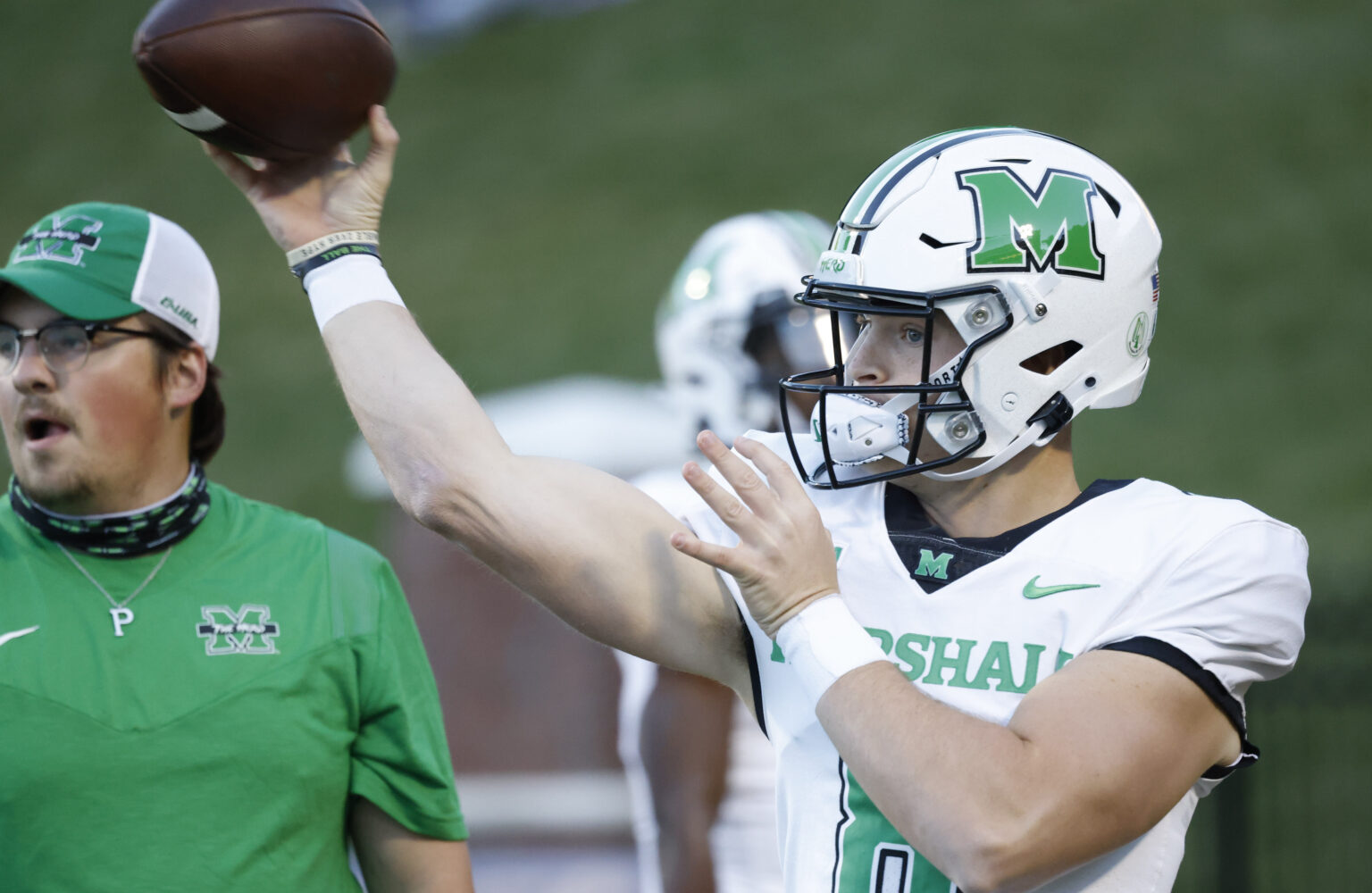 BOONE, N.C. — Appalachian State’s Chandler Staton booted a go-ahead field goal from 45 yards with 5:45 left, and the defense made a key stand before Nate Noel’s open-field running clinched a 31-30 victory over Marshall on Thursday night in front of 28,377 fans at Kidd Brewer Stadium.

Following Staton’s field goal, Marshall moved into App State territory, but D’Marco Jackson and Jalen McLeod forced a 6-yard loss by Thundering Herd freshman Rasheen Ali. Caleb Spurlin got second-down pressure on quarterback Grant Wells and forced a throwaway, and a third-down incompletion led to a punt that gave the Mountaineers possession at their 8-yard line with 4 minutes to play.

Marshall needed a stop, but Noel and the Mountaineers’ offensive line had other thoughts. Noel ripped off runs of 11, 14, 41 and 22 yards on the final drive alone, wisely going down intentionally at the 5-yard line with 50 seconds left to prevent Marshall from regaining possession with an eight-point deficit.

“Made some mistakes at the end,” first-year Herd coach Charles Huff said on the radio post-game show. “Too many at the end to beat a good team. The kids fought. This is a tough place to play. We’ve got to get a way to make a few more plays at the end.”

Quarterback Chase Brice then took a knee three times to run out the clock and the thriller came to an end, allowing Appalachian State (3-1) to atone for last year’s 17-7 loss in Huntington.

Ali reeled off a 97-yard kickoff return on a fake reverse to give Marshall a 20-14 lead. It was Marshall’s first kickoff return for a score since Keion Davis in 2017 against Miami (Ohio).

“He’s continuously growing up,” Huff said of Ali, who has 10 touchdowns rushing.

But App State got a 2-yard run by Camerun Peoples 4 seconds before halftime to go back in front 21-20 on what marked Peoples’ third first-half rushing score.

Corey Sutton and Thomas Hennigan led the App State receivers. Sutton grabbed 10 receptions for 127 yards, including a 24-yard TD pass early in the fourth period that survived a review call. Hennigan caught nine balls for 123. Brice threw for 283 yards and the Mountaineers had 283 rushing yards for 566 total yards.

Jackson, a linebacker, racked up 14 tackles.

“We’ve wanted to do that all year,” Huff said about taking advantage of mismatches created by Gaines.

The Herd finished with 397 total yards.

“We’ve got to tackle better,” Huff said. “Those two guys are really hard runners. We’ve got to get guys on the ground.”

Huff turned to left-footed Shane Ciucci to handle placekicks. A regular last year, Ciucci was behind Andrew Sanders, who was 2-of-4 on field goals through the first three games. One miss was a 31-yarder early in the fourth period against East Carolina.

Ciucci made three boots, one a career-best 46-yarder for a 23-21 Herd lead. He missed a 32-yard try wide right in the fourth period that would’ve given Marshall a 33-28 lead.

“We’re still figuring it out,” Huff said. “We have to get a lot more consistency.”

Marshall next plays October 2 when it opens the Conference USA schedule at Middle Tennessee State. The Herd was the preseason favorite to win the East Division.

“This was our litmus test, our foundation,” Huff said. “Not a failure, a learning experience.”

Notes: Marshall had six first-half penalties, four of which were pass interference calls. The Herd had eight total infractions for 70 yards … App State and Marshall played every year from 1977-1996 as Southern Conference rivals … On Sutton’s TD catch, officials reviewed the play and confirmed that Sutton dragged his back foot on the black end-zone turf just before his lead foot hit the turf out of bounds … Sutton knew immediately, sprinting roughly 50 yards to celebrate … App State leads the overall series 15-9. Mountaineers’ coach Shawn Clark is a native of Charleston.