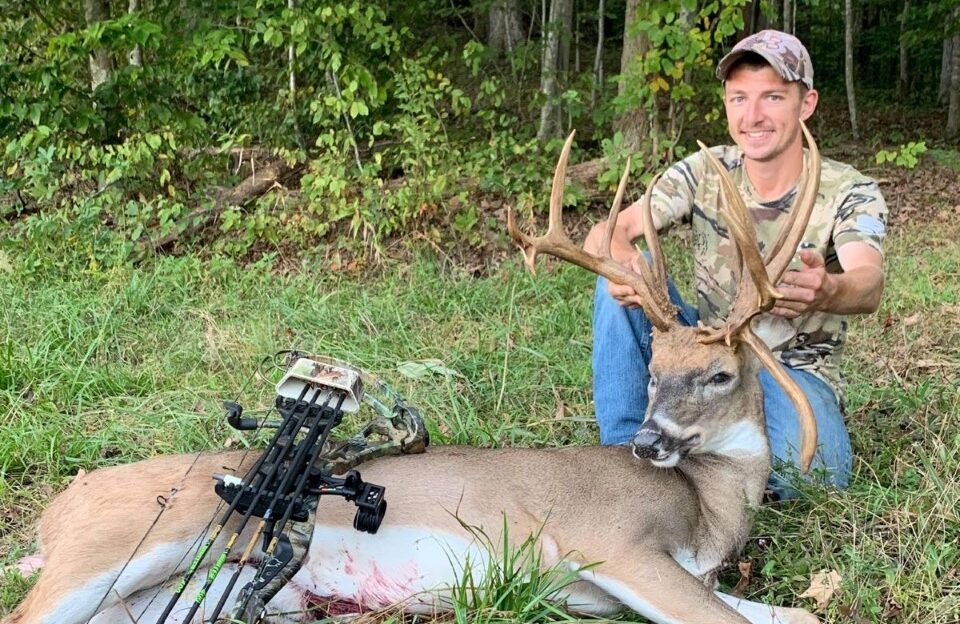 Jesse Truman of Big Chmney, W.Va. with the impressive buck he took on day three of the archery season in Clay County.

CHARLESTON, W.Va. — When the 2021 archery hunting season opened, Jesse Truman of Big Chimney, W.Va. knew he was on the clock. Truman hunts a farm his family owns in Clay County near the community of Ivydale and for several years he’s been aware of a buck which had proven to be an elusive critter.

“I call him the ghost buck,” Truman said in a conversation with West Virginia Outdoors. “I have a lot of history with him.”

Truman explained he knew the buck to be at least five years old and might even be six. It had spent spring and summer on their farm in Ivydale for several years and was commonly spotted.

“He had a pattern that I just figured out this year. He would stay on the farm for the spring and summer, and around the second week of October he would vanish and I would never get a picture of him again,” he explained.

During the 2020 archery season, Truman got a shot at the buck–which sported a fully typical rack at that time. But his arrow hit a limb and he missed. He admitted it was a sick feeling. He got a nighttime picture off the buck on the eve of opening day of the rifle season in November of last year, but never saw him again.

Truman doesn’t like to hunt during the heat of the early season, but knew if he wanted to take this buck with the now unusual rack, he would need to endure. He decided against hunting on Monday because of the heat–despite the suggestion of his mother he should go. He should have listened. The buck showed up on camera that evening. On Tuesday, Truman decided he would listen to his mom and was in his ground blind when deer started moving in on him around 6:45.

“The next thing I know I saw a long tine coming from behind a holly tree and he stepped out,” Truman explained.

Truman said the buck walked to 15 yards and was quartered toward him. It was a step away from a broadside shot, but when he drew back, his arm barely touched the wall of the blind.

“He tensed up and was ready to bolt. He couldn’t see me, but he knew something was wrong. I let it go and put it right behind his shoulder. I knew it was a good hit,” Truman said.

But the big buck, even with a good shot, bounded out of sight. Truman waited a couple of hours before trying to find him. He jumped him up after only a few yards. After another two hours and the clock now digging into the wee hours of the morning the buck jumped up again. So he decided to call it a night and resume the search at daylight.

“I got worried about not being able to find any blood, so I call the guy at Longspur Tracking, just in case.” Truman explained.

Shon Butler showed up the next day with his dog and according to Truman, the search was over before it even got started.

“That dog dragged us straight to that deer. I would have eventually found him because I would have kept circling, but I’d have never found him that fast,” he said.

The buck’s rack has a fairly normal right side, but the main beam is split on the left with a massive drop tine. The split was a deduction which will be costly on the Pope and Young Score. A green score of the rack only yielded around the 150 point range. That didn’t matter to Truman.

“I’ve always wanted a Pope and Young with my bow, but it doesn’t look like he’s going to make it. Still, if you see it, he’s a giant and a buck of a lifetime,” he said.