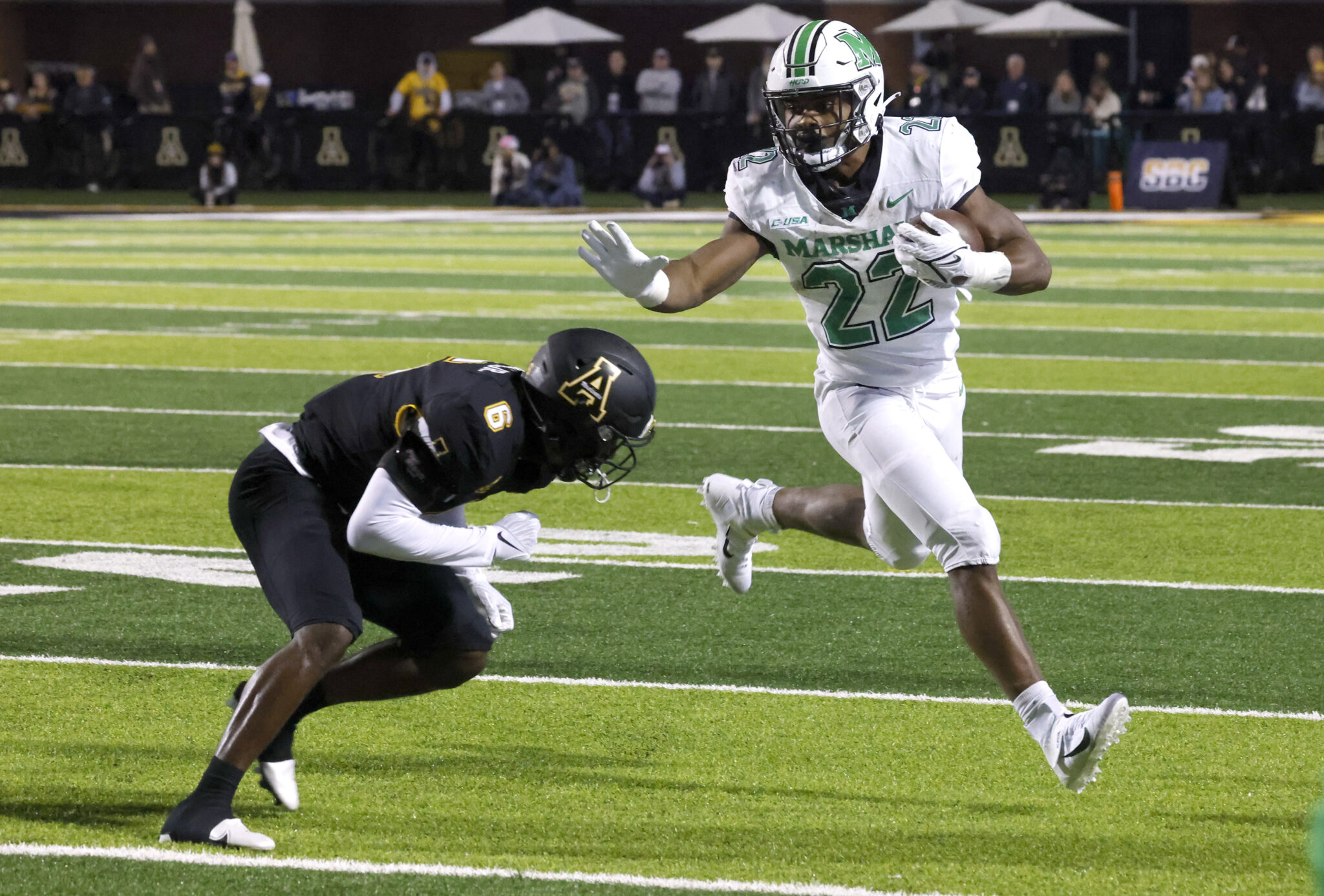 HUNTINGTON, W.Va. — Marshall’s 2-0 start to the 2021 season and the optimism it generated are long gone.

In turn, first-year head coach Charles Huff is looking for a turnaround from his team following three straight close losses.

Combined with previous losses to East Carolina and Appalachian State, the Herd has dropped three straight by a combined 11 points. With 15 turnovers — eight interceptions and seven lost fumbles — pinpointing an area of improvement isn’t difficult.

“Obviously you all could see it. Ray Charles could see the issue that happened Saturday night,” Huff said. “We’ve got to find a way to eliminate the turnovers. It’s been something that’s been happening since the first game of the year. We’ve gotten away with it in multiple games and now it’s catching up to us. Sometimes it takes a failure to learn.”

After a slow start, the Marshall offense eventually gained nearly 500 yards of offense.

Marshall nearly had a chance for a last-second drive, but Rasheen Ali touched the onside kick just before it reached 10 yards with 2 minutes left.

Huff hopes his team realizes that it’s close to putting together some solid performances.

“I told them we had six turnovers and a blocked punt and we’re still less than a half a yard away from having an opportunity to go win the game,” Huff said. “How great can we be if we stop beating ourselves? I told them when I went in the locker room, do not hang your head. I believe you hang your head when you play your best and the other team beats you. You don’t hang your head when you beat yourself. You’ve got to look in the mirror and say ‘How can I get better?’ That was one of the things we talked about.”

The Thundering Herd will strive to end the skid on homecoming Saturday as Old Dominion comes to Joan C. Edwards Stadium for a Conference USA contest at 2 p.m.

The Monarchs have endured a tough schedule to this point. In addition to last week, they suffered road losses to Wake Forest and Liberty and fell to Buffalo. The Monarchs’ lone win is a 47-7 victory over FCS school Hampton.

Rahne’s team, like Marshall, almost overcame a deficit to pull out a win last week at UTEP after falling behind 17-0.

“It was a tough loss,” Rahne said. “We didn’t play well enough in the first quarter there. We dug ourselves a 17-point deficit which is a hard thing to overcome. We’ve got to play better than that in the early going. My job as the head coach is to unlock each of these young men’s potential, and we found a way to do that especially in the third quarter. Just need to find a way to do that in the first quarter.”

Rahne says he’s looking forward to competing against Huff, who he worked alongside at Vanderbilt in 2011 while both were on a staff under current Penn State head coach James Franklin.

“Great person,” Rahne said. “Obviously, proud of what he’s already been able to accomplish in his career, he’s earned everything he’s had. I’m going to cheer for him every week of the year except this one. Obviously, he’s going to be the same way. Little things like sometimes those type of rivalries, like a rivalry with your brother sometimes those are the most fierce ones.”

The Herd and Monarchs have met six previous times and Marshall has a 5-1 series lead. The teams last met in 2019, a game in Huntington won by Marshall (31-17).

Old Dominion opted out of playing in 2020 due to the Covid-19 pandemic.

Saturday’s game can be viewed on the CBS Sports Network Facebook portal … Even with the MTSU loss, Marshall’s offense is still among the nation’s best, ranking fourth with 540.6 yards per game … Huff has issued a challenge to Marshall players to contribute to Breast Cancer research during October, which is Breast Cancer Awareness Month. Huff is asking his players to donate a dollar from their game week per diems to the Breast Cancer cause and he’ll personally double what the players contribute at the end of the month.