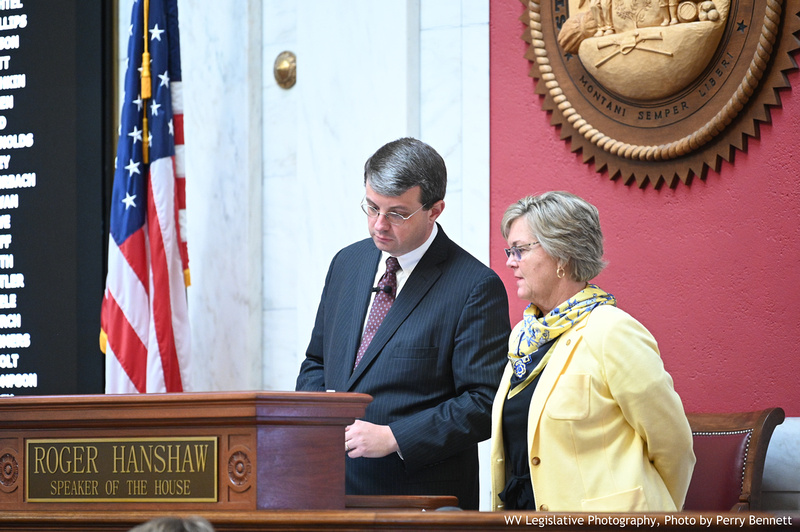 Over the objections of business groups, the House of Delegates passed a bill outlining requirements for religious and medical exemptions to workplace vaccination requirements.

“This bill does not stop any employer from enacting a mandate. The only thing this bill does is say if you’re going to have a mandate here’s the guidelines you need to go by,” said Delegate Brandon Steele, R-Raleigh, chairman of the Government Organization Committee.

House Bill 335 passed by a 68 to 30 vote, with House Speaker Roger Hanshaw, R-Clay, among those who voted against it. The bill remains under consideration in the state Senate.

The bill allows exemptions for workers who provide signed documentation by a doctor or advanced practice nurse, after an in-person examination, that a specific medical precaution is warranted. It also allows exemptions through notarized certification for workers with religious beliefs against taking the covid-19 vaccine.

Gov. Jim Justice introduced the bill partway through this week’s special session that initially was called for legislative redistricting and to allocate federal relief dollars to state agencies.

The bill resulted in vigorous debate over whether it would delineate religious and medical exemptions already present in caselaw or whether it might instead run counter to federal regulations. Another worry was the possibility that the bill could result in unintended consequences such as increased risk of litigation for employers or opening the door to broad exemptions for other, longstanding vaccination requirements.

Dozens of employers under the umbrella of the West Virginia Chamber of Commerce sent a letter to lawmakers expressing opposition to the bill.

They noted that employers with immunization requirements for their workforce are already under the guidance of federal law, that West Virginia employers are likely to feel obligated to follow federal guidelines when they go into effect through the Biden administration, and they contended that the bill interferes with a private employer’s rights to manage their own workplace.

“This bill sends a chilling message to employers looking to expand into West Virginia and sets up existing employers for a barrage of lawsuits,” the companies wrote.

House Minority Leader Doug Skaff, D-Kanawha, made reference to that letter when he argued against the bill.

“I have a list of 50 businesses here, last 24 hours, major employers, against this bill. Every one of us wants to make this a more business friendly state,” Skaff said. Usually, he said, the argument is “Get government out of the way and let us do our business. This bill does the opposite.”

House Majority Leader Amy Summers, R-Taylor, said the intent of the bill is neither anti-vaccine nor anti-business. Summers, a nurse, said she spoke both for her constituents and for many workers in medical fields.

But she said debate on the House floor had been divisive.  “Here we are pitting business against worker. Shouldn’t we be for both?” Summers asked. “Today I suggest we err on the side of individual liberty and vote green.”

Governor Justice made similar points while discussing the bill at a covid-19 briefing today.

“I personally don’t believe that we should just throw our freedoms and our rights in the trashcan,” Justice said. “We’re going to get through this. I personally believe that, at the end of the day, that someone who genuinely has a medical or religious objection to this — that someone is not going to be the catalyst that’s going to cause more and more issues, and that someone at least not be terminated from their employment” because of their beliefs.

Delegate Shawn Fluharty, D-Ohio, took issue with the governor’s introduction of the bill one evening a couple of days into the special session. Fluharty also suggested the move sent a mixed message, making reference to the governor’s weekly “Do It For Babydog” lottery, named for his bulldog, to encourage vaccination.

“Why is Governor Justice encouraging vaccines and then allowing lax exemptions so some people can have loopholes?” Walker asked.

“To me, this bill doesn’t do enough for our freedoms. It doesn’t protect us to make our own choices,” said Delegate John Mandt, R-Cabell.

“We are the last bastion on earth for this type of freedom,” she said. “I’d like to see more freedom and more liberty, but I rise in support.”