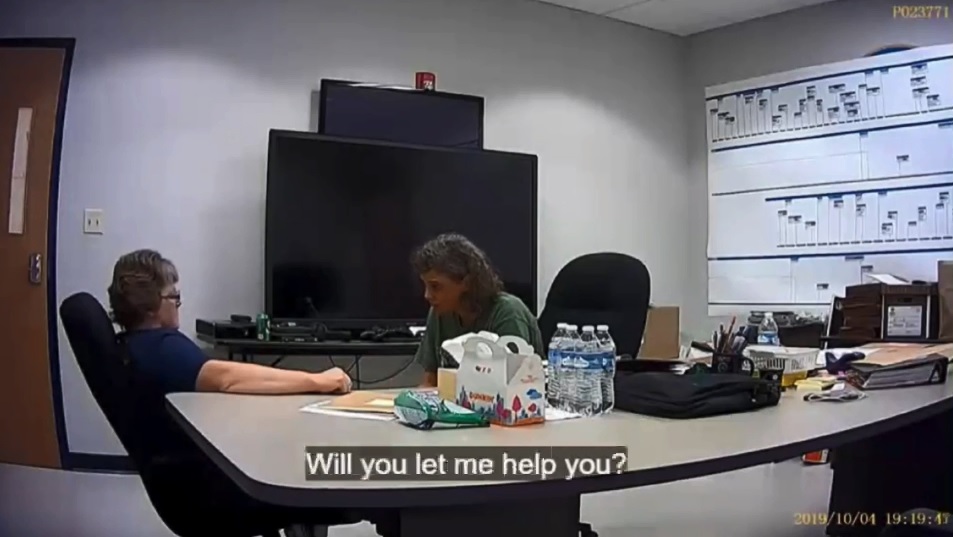 MORGANTOWN, W.Va. — Convicted murderer Reta Mays went to the courthouse in Clarksburg to apply for a court-appointed attorney soon after she was interviewed for a third time by federal investigators.

She did so even though she had not yet been charged with a crime.

The U.S. Attorney’s Office in Northern West Virginia and a team of FBI investigators had built such a strong case of circumstantial evidence against the former nurse’s aide at the Clarksburg VA Medical Center that she told a special agent during that third interview “looking at this, it does look like I did it.”

Information about the two-year investigation was released in detail back on Thursday at a symposium held at the WVU College of Law. The symposium looked at clinical, forensic, psychiatry, and legal prosecution techniques. One of the panel discussions involved those who investigated the Mays case.

Mays pleaded guilty in July 2020 to killing 7 veterans and assaulting an eighth who died. She injected them with insulin when they didn’t need it causing them to go into shock and die.  She was sentenced last April to seven consecutive life sentences plus an additional 240 months behind bars. She’s now in a federal prison.

The veterans were killed from July 2017 to June 2018 in a place they had gone to get help.

A person of interest from the beginning

As investigators told the story about how they began investigating the suspicious deaths of those VA patients they said Mays was a person of interest from the beginning.

She had access to the patients and access to insulin and she was assigned to the victims’ rooms on the overnight shift.

But the evidence was circumstantial. As one investigator said they didn’t have any fingerprints, eyewitnesses or syringes left behind in the trash but what they did have pointed toward Mays.

After Mays was moved off of the 3A Ward and investigators arrived there were no more killings.

It came just a few days after investigators came to Clarksburg in 2019. They wanted to talk with everyone including Mays.

The interview came at the hospital and the conversation was recorded. Investigators said they were hoping for a confession or “admissions we could use down the road.”

A special agent interviewed Mays for an hour. The result was a denial of any involvement but they wanted to leave the door open for further discussions.

Very early in the interview, Mays complained of being overworked. She also complained of being pulled from her ward and her responsibilities. At times, she cried saying things were being missed in connection with the patients and low blood sugar levels.

The investigator focused on those comments.

“What are you leaving out? Because some people omit things and it still makes them feel bad. So what is it that you could be omitting that is making you feel what you feel now?”

“No, I don’t know of anybody that’s done anything,” Mays said, adding that she was being honest.

“The recurring theme which for us obviously stood out was she repeatedly made the statement that she believes that things were being missed with these low blood sugars and with respect to these patients,” Flower said.

Investigators later learned by reviewing internet browsing records that immediately after that first interview Mays went back to her work station and began searching the internet for new jobs.

The phone calls to jail

Some of that investigative work included listening to hundreds of hours of phone calls that Mays made to her husband who was in jail on a pornography conviction. She would call him almost every morning after her night shift and some of those conversations focused on what happened at work.

In one such call, Mays told her husband about one the patients she was having trouble with.

“At four o’clock in the morning I had to take over sitting in one of the one-on-ones so one of the other aides could go out and work on the floor and the one I was sitting with I wanted to freaking strangle,” Mays said.

Investigators said that call was made the morning after one of the blood sugar episodes.

Another call on another morning was even more detailed and chilling.

Mays complained to her husband about her arms being sore because she was doing compressions on a patient. She said it all could have been avoided.

Investigators said that was one of the calls that convinced them even more that they had the right person.

“How would an untrained individual know that if a blood sugar level went to 30 they wouldn’t have woken up?” An investigator asked.

It wasn’t until months later that the investigative team decided it was time to take another run at Mays with an interview. They had spent months gathering more evidence.

The circumstantial evidence was piling up. Her Google searches included information about notorious women serial killers and her Netflix viewing included a show about nurses who murder. One of the episodes focused on insulin killings.

A supervisory special agent from Quantico, Va. was brought in to conduct the interview. The investigative team said the point of the interview was to gain background and understanding.

“At this time we didn’t have a motive. We had some clear evidence that pointed to Mays as our person,” one of the investigators said at Thursday’s symposium. “We also had the autopsies and that provided evidence but the motive was very unclear.”

Mays talked to the special agent for five hours. Investigators said she could have left at any time but she didn’t. She repeated many things she had said in the first interview months before and when the agent presented her with additional evidence she denied it.

“Today I’m telling you the opportunity you are passing up,” the agent said. “So tell me what happened, the truth. I will treat you as I’m treating you this very moment. Nothing you say will shock me or cause me to treat you any differently. After today, I cannot make that promise to you.”

There was a several minute pause. Mays said nothing. Investigators described her reaction as “complete shutdown.”

Mays went back to work and again searched the internet. This time she looked up information about the book “I’m Dead Now” which leaves instructions to family members after a person dies.

It was more than a year after that second interview than a third one would take place. Investigators told Mays she could come to the office to pick up her cell-phone that they had taken with a search warrant. When she got there they asked if she wanted an update on the case. She said she did. She then agreed to speak with them.

A different agent had been prepped for this interview. She had a similar background as Mays including spending time in the military. She and the team prepped for two weeks before asking Mays to come in.

Investigators had accumulated loads of information as they continued to build the case against Mays.

“Way more than when we had first talked to her,” the team said. “By this time we’ve built a very strong case on circumstantial evidence but the motive was still eluding us.”

The interview, which would last six hours, began by talking about Mays’ family and childhood. They wanted to avoid a shutdown like the second interview had produced.

Mays was presented with a lot of patient information along with the accusation that investigators believed she was responsible for the deaths.

“Will you let me help you?” The investigator asked Mays.

“If your heart is hard and your neck is stiff I cannot help you,” the investigator countered. “You can tell us what’s been going on here. You can help us fix the system.”

Mays leaned back in her chair and said nothing. There was still no confession.

As mentioned earlier, Mays did conclude during the interview that the evidence was pointing toward her.

The trip to the courthouse

Mays, as she had following the first two interviews, reacted. This time she went to the courthouse to fill out an affidavit for a court-appointed attorney but you can’t get one unless you are charged or named in a target letter from investigators. Mays had neither.

But once investigators learned Mays had made that trip they responded with a target letter and in the weeks ahead Mays received three court-appointed attorneys and that opened the door for plea negotiations to begin.

By this time it was February 2020. Over the next few months COVID would begin to make its mark. The first plea discussions came on a Zoom call.

“We talked to them about medical evidence and that the experts had studied the medical evidence. We told them how we could document her being there for most of the cases,” investigators said.

They said they were also open with Mays’ attorneys about not having eyewitnesses, fingerprints or used syringes.

“We had strong circumstantial evidence,” one investigator said. “I told them I wouldn’t want to be her (Mays) at the defense table.”

Investigators were at the same time consulting with the victims’ families about a plea resolution or whether they were going to seek the federal death penalty.

“The families were the center of our focus,” they said.

The plea agreement, which had to be approved by then-U.S. Attorney General William Barr, included guilty pleas in a prosecutor’s information to those 7 counts of second degree murder and single count of assault to commit murder. It would result in Mays spending the rest of her life in prison.

A few questions and answers

At the end of Thursday’s panel discussion there was a brief question and answer session.

–Mays was never in custody until her plea hearing ended before U.S. District Judge Thomas Kleeh.

–there’s never been a motive determined and Mays has never been clear on how she selected her victims.

–Mays had complained about some patients touching her. Other employees said she was being overly sensitive about patients with dementia who weren’t really touching her in an intentional way.

Investigators said when the investigation began they worked quickly with the VA to remove Mays from the ward.

“Our primary focus was about saving lives,” an investigator said. “We couldn’t sit back. When we pulled her from patient care we knew we were showing our hand. We knew that would make our job that much harder. We were not willing to accept anyone else getting killed with the red flags that we had.”

The panel members and those who organized the symposium praised the families of the veterans who died for allowing the case to be discussed in detail.