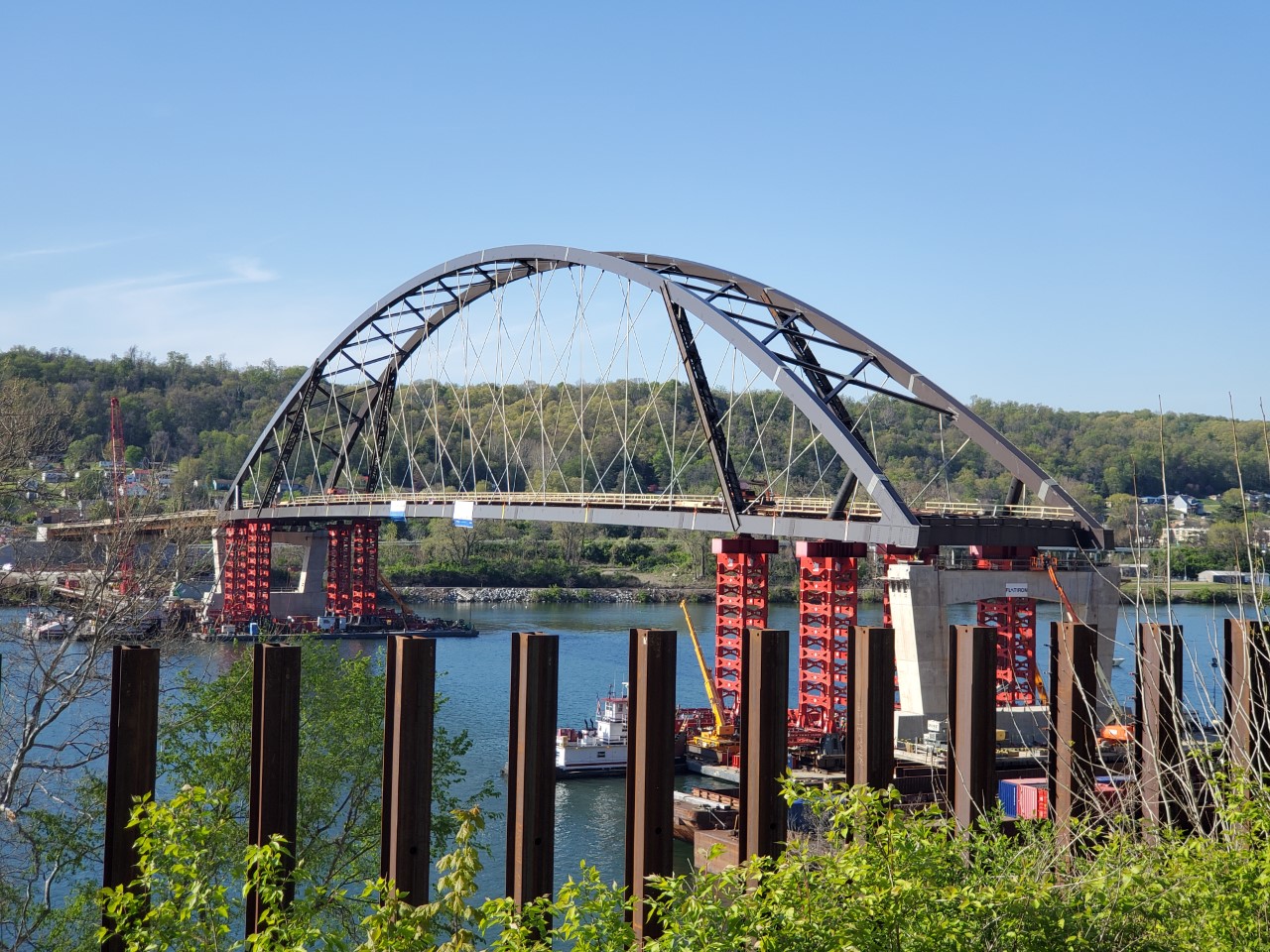 APRIL PHOTO: The 830-foot main span of the bridge was floated down the Ohio River and lifted onto its pilings in April.

WELLSBURG, W.Va. — At this time next year, West Virginia Division of Highways (DOH) District 6 Engineer Tony Clark is hopeful vehicles will be able to cross the Wellsburg Bridge.

Clark told MetroNews with the work that has been done since the bridge’s historic float into place and what is planned for next year, the end of October 2022 is the projected target range for the completion of the $131 million project in Brooke County. The bridge will connect the community of Wellsburg with Brilliant, Ohio.

It what many officials called an ‘engineering marvel,’ the 830-foot main span of the bridge was floated down the Ohio River and lifted onto its pilings in late April, a half year ago. It was built on the shoreline of the West Virginia side of the river in 2019 by Flatiron Construction.

Clark said for the past six months, crews have finished rebar and formwork for the approach decks to the bridge, leading up to the arch on the Ohio side. Concrete has already been poured for those decks.

He added that crews are now working on the same operation on the West Virginia side and doing formwork on the deck itself. Clark said it depends on the weather and temperatures if crews will be able to get the decks poured by the end of the year.

Clark admitted that work slows down in the winter months but not completely. He said crews will fill material on the Ohio side for the bridge going over Ohio State Route 7. The bridge ties into 3rd Street in Brilliant, Ohio and not Ohio Route 7.

“There will still be ongoing work but it won’t be as productive. Construction is never as productive in the winter as it is in the spring, summer and fall,” Clark said.

The project is a collaboration between the DOH and the Ohio Department of Transportation, Clark said, but the contract is handled through the DOH.

Awarded in 2016, the project is Flatiron’s first project in the state and West Virginia’s first alternative delivery project. Piers were already constructed and the bridge was raised to the necessary height then pushed upstream and lowered onto those piers.

Clark said the alternative delivery project was something the contractors approached the DOH about using.

“They proposed this to us. Now that we’ve seen it’s possible, we may incorporate that into future plans,” Clark said. “Even though river bridges only come up every 10 to 20 years.”

“We’re going to push West Virginia Route 2 out towards the river and create a three-lane section there for about a mile in the bridge area,” Clark said.

Currently, motorists in a passenger vehicle traveling along West Virginia Route 2 or Ohio Route 7 are able to cross the Ohio River between Ohio and West Virginia on the Fort Henry Bridge in Wheeling or the Market Street Bridge, north of Follansbee and into Steubenville, Ohio. The distance between those two bridges is roughly 25 miles.

The Wellsburg Bridge idea was pushed for years, according to Clark, and was a dream of former Wellsburg Mayor Sue Simonetti who passed away on March 31.