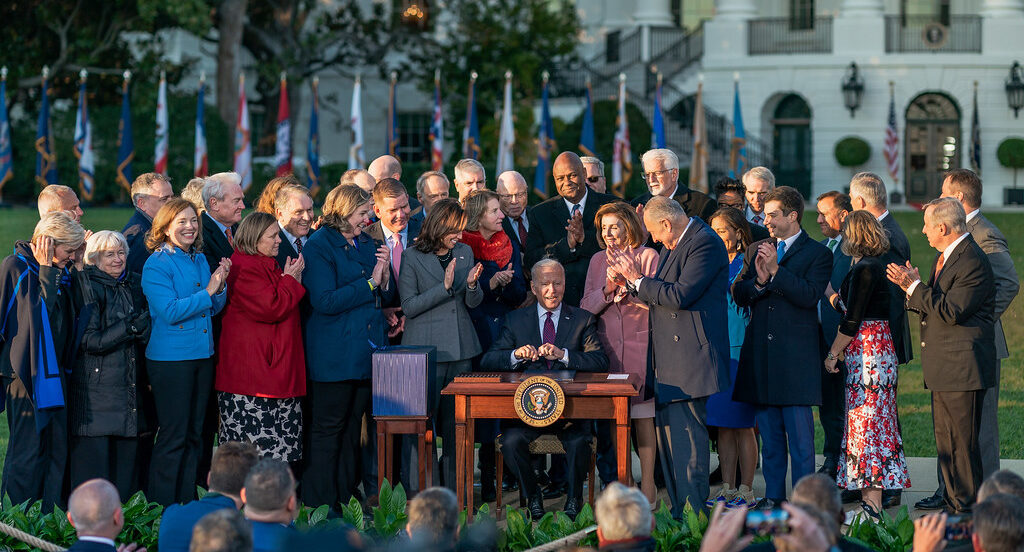 Capito played a significant role in the law’s creation; the statute is rooted in a $311 billion surface transportation measure and a $35 billion water infrastructure proposal. The Senate Environment and Public Works Committee — which Capito serves on as ranking member — passed the bills earlier this year.

The senator additionally led early discussions between Republicans and the White House about possible legislation. The negotiations did not result in an agreement.

Capito and Sen. Joe Manchin, D-W.Va., were among the lawmakers present at Monday’s bill signing ceremony outside of the White House. Capito stood behind the president as he signed the legislation into law.

“In my view, this is a major win for the country,” she said.

As lawmakers were trying to get the measure through Congress, Capito and her colleagues were reaching out to the U.S. Environmental Protection Agency about assisting Clarksburg residents affected by elevated levels of lead in the local water system. Capito, Manchin and Rep. David McKinley, R-W.Va., requested help with providing people with bottled water and collaborating with local and state agencies on sampling efforts.

“This will help alleviate that situation with the remaining lead pipes we have in the state,” Capito said.

The Appalachian Development Highway System will receive $1.25 billion. According to Capito, the law dedicates almost $200 million for completing Corridor H, which will connect Weston to Interstate 81 in Virginia once completed.

The statute also provides funding for increasing broadband to at least 258,000 West Virginians who do not have coverage.

As Capito has celebrated the president’s signature, some Republicans in the House of Representatives are dealing with criticism because of their support. Thirteen Republicans — including McKinley — voted for the legislation, causing some to consider removing these lawmakers from their committees.

“What are we doing here if we send our representatives to Washington to vote on what they feel — in working with their districts and constituents — is in the best interest of their constituents, and then when they do that, we threaten to strip their committees? Or to somehow disavow their right as a representative of their district to come in and express their opinion?” Capito said. “I don’t think that is what our founders wanted. They wanted discussion, they wanted differences. At the end of the day, the majority wins in the House, and that’s what happened.”

“America’s infrastructure has been in dire need of modernization and this bipartisan infrastructure bill is what community leaders from one panhandle to the other have expressed that West Virginia needs to restore our aging infrastructure,” he said on Nov. 5.

McKinley’s vote is already being used against him. Rep. Alex Mooney, R-W.Va. — who was put in the same district as McKinley following legislative redistricting efforts — has touted his opposition to the infrastructure law, noting it is part of the president’s broader domestic policy agenda that includes a proposal on health care, climate change and child care.

“This non-infrastructure bill would not have passed without the support of 13 Republicans in the House of Representatives, who have now paved the way for Democrats to pass President Biden’s socialist Build Back Better plan,” Mooney said Monday.

Capito argued Trump deserves credit for starting discussions about infrastructure legislation during his tenure as president despite his administration and Congress not approving a plan.

“He didn’t get it over the finish line, but it doesn’t mean it isn’t any less important,” she said.

“I don’t think it’s a good idea to create divisiveness within our own party, and President Trump is a Republican,” Capito also noted.

The senator mentioned she did reach out to McKinley, Mooney and Rep. Carol Miller, R-W.Va., about the measure ahead of the House’s vote earlier this month. She did not want to comment specifically regarding Mooney’s statements.

“At the end of the day, individual members are going to be able to make their own decisions,” she said Thursday. “They can say why they didn’t vote for the bill, and certainly that’s within their right.”

The Biden administration accomplished one of its domestic policy goals with the passage of the infrastructure proposal, yet Capito said the measure has become “too politicized” and people should focus more on the law’s impact.

“I do feel like we gave the country and our state a big victory not just on the substance, but on the fact that we’re going to work together and if it looks good, feels good and is good, then we’re going to forward with it,” she said.

The Senate will consider the social and environmental measure following the House’s passage. Capito opposes the bill, while Manchin has raised concerns about portions of the plan, including language on climate change, paid family leave and child care tax credits.