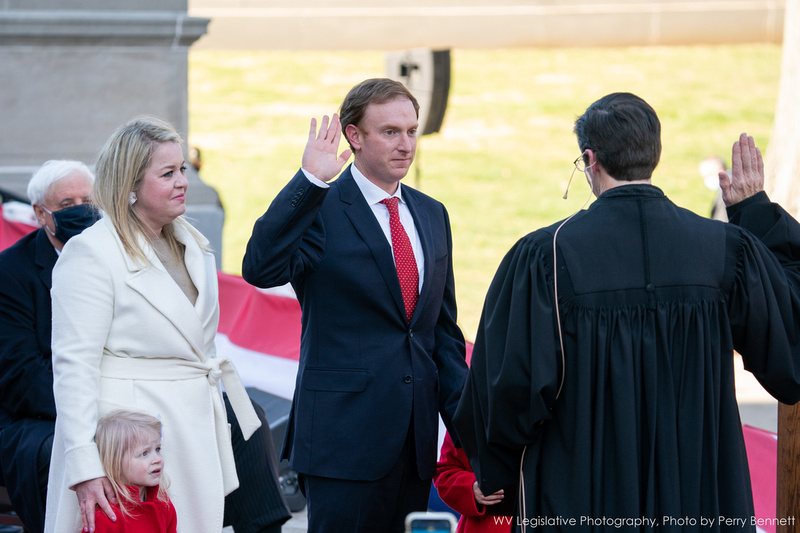 Auditor J.B. McCuskey's family watches as he is sworn in during the 2021 inauguration ceremony. (Perry Bennett/West Virginia Legislative Photography)

Auditor J.B. McCuskey in a radio appearance today suggested he is strongly considering a run for governor.

McCuskey did not announce a run but was clear that he is very interested.

“It’s the only job I’ve ever actually wanted,” he said. “If the stars align, then yes.”

McCuskey, a Republican, is in his second term as auditor. If he jumps into the 2024 governor’s race, it could be a competitive field that includes other prominent elected leaders in the executive branch, as well as some legislators and figures from West Virginia’s business world. Incumbent Gov. Jim Justice, a Republican now in his second term, faces a term limit.

McCuskey addressed his consideration of a run for governor after regular caller Jim Brown posed the question this morning on “580 Live” on WCHS Radio.

“Will Mr. J.B. McCuskey be putting in a bid for governor this next time?” the caller asked.

“He may be. I don’t know. If we’re talking about me in the third person, which is kind of fun,” McCuskey responded. “It is a lifelong goal of mine. It’s the only job I’ve ever actually wanted. And aside from my family — the only real goal I’ve ever had was making sure I have happy daughters and a happy wife and live in a state that represents the vision I’ve always seen it as.

“To me, being the governor is the greatest honor any true mountaineer could have, and it’s the only thing I’ve ever really wanted to do. So the answer to your question is probably yes.”

McCuskey is a Charleston native who served in the House of Delegates from 2012 to 2016.

He ran a successful campaign for Auditor in 2016. He was 35 at the time and became one of the youngest statewide officeholders in state history. His office has emphasized transparency of public dollars, trying to make it easier for citizens to see how money is spent.

In 2019, McCuskey announced a bid for a second and “final” term, winning again.

“I believe that two terms is an appropriate amount of time for anybody to serve in our constitutional offices,” McCuskey said that year. “I think George Washington had the right idea when he founded our country.”

Today, radio host Dave Allen pressed McCuskey for more specifics about his future political plans. McCuskey was clear about his desire to run for governor but said the effort and timing depend on other aspects of life.

“If the stars align and my family is healthy and happy and our business is good and I’m healthy and ready to go, then yeah. At the end  of the day yes. But there’s a lot of things that can happen between now and then.”