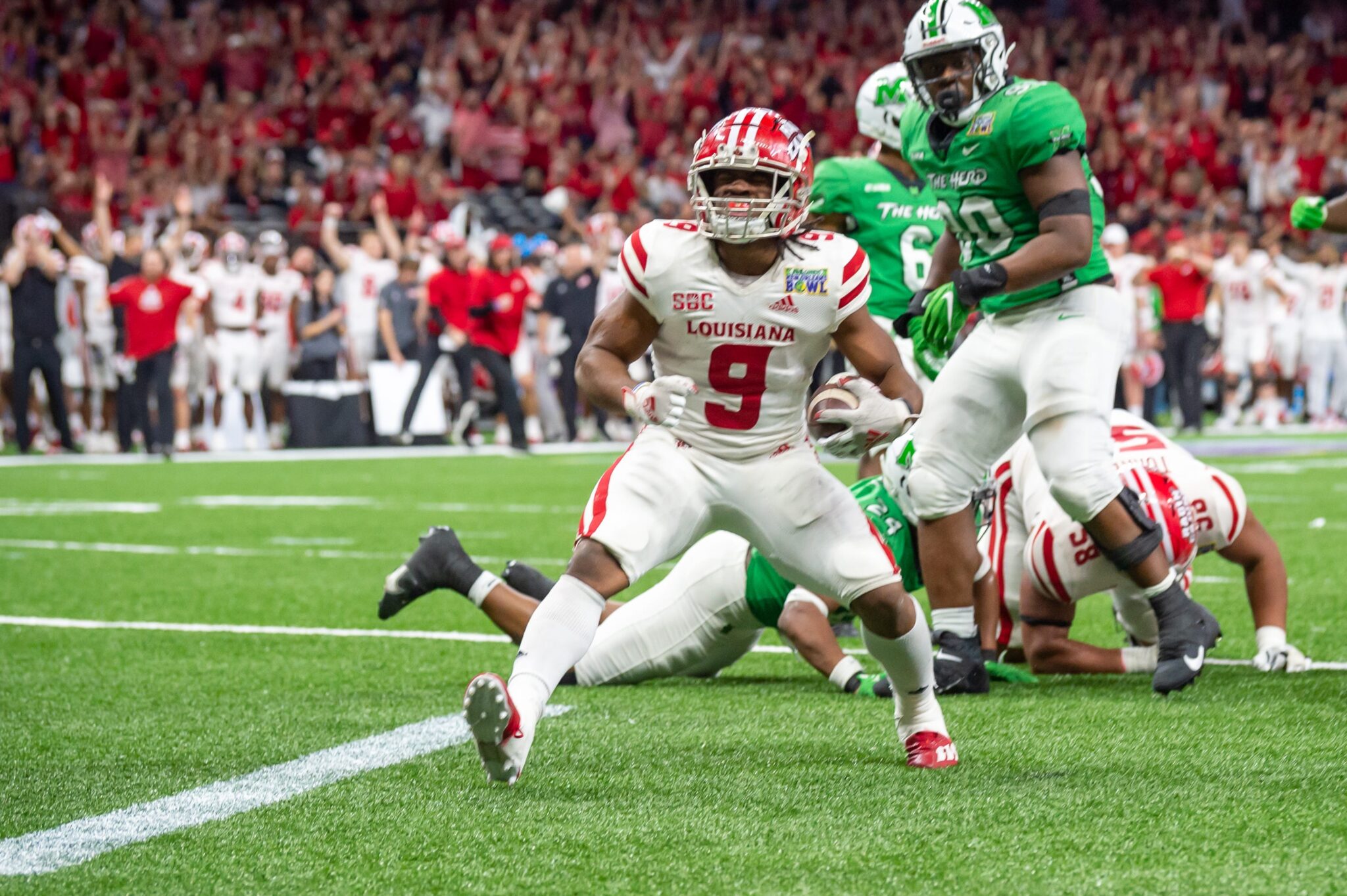 Emani Bailey scores a touchdown as The Louisiana Ragin Cajuns take on Marshall University Herd in the 2021 R+L Carriers New Orleans Bowl at the Caesars Superdome in New Orleans. Syndication: The Daily Advertiser

No. 16 Louisiana scored three touchdowns in the fourth period to come back and defeat Marshall, 36-21, Saturday night in the R&L Carriers New Orleans Bowl inside the Caesars Superdome in New Orleans, La.

The win came in the first game for Michael Desormeaux as head coach of the Ragin’ Cajuns (13-1). It also ties the Sun Belt Conference champs for the nation’s longest winning streak with Cincinnati at 13

Louisiana did the fourth-quarter damage with big plays, tough inside running and one big defensive stop.

Michael Johnson caught a 41-yard pass from Levi Lewis for a first down at the Herd 12. Emani Bailey got the go-ahead score on a 4-yard run, making it 22-21.

Marshall went three-and-out on the next possession, opting to punt with a yard needed on fourth down.

Louisiana took over at the 27 and went 73 yards for the TD on a 3-yard run by Montrell Johnson with 3:54 left. Jefferson had a 53-yard grab for the key play on this drive.

On its next possession, the Herd went three-and-out again. The Ragin’ Cajuns moved 52 yards in six plays with Bailey scoring on a 3-yard run. He had runs of 19 and 11 yards along the way.

Lewis completed 19 of 31 passes for 270 yards and a TD and ran 12 times for 74 yards. He was voted MVP of the bowl game. Bailey totaled 92 yards rushing and Jefferson caught three balls for 108 yards.

Marshall’s offense consisted basically of freshman back Rasheen Ali and wide out Corey Gammage. Ali carried 20 times for a Marshall bowl record 160 yards and scored three times on runs of 63, 14 and 9 yards. He concludes year one with 25 total touchdowns, 23 rushing.

Gammage caught a single-game best of 9 passes, but for only 50 yards.

Quarterback Grant Wells, who left the regular-season finale against Western Kentucky in the second quarter, got cleared to play in the bowl game, but struggled. Averaging 310 yards a game coming in, he completed 15-of-26 for 99 yards and no scores.

Marshall went 0-2 against Sun Belt teams this season. The Herd lost at Appalachian State in game 4 of the regular season. Marshall has accepted a spot in the league and is expected to join in 2023.

Louisiana did have defensive back Jayrin Wilson ejected for targeting when he went helmet-to-helmet on punt returner Willie Johnson who had signaled for a fair catch on a third-quarter punt. The play was reviewed and Wilson got tossed.