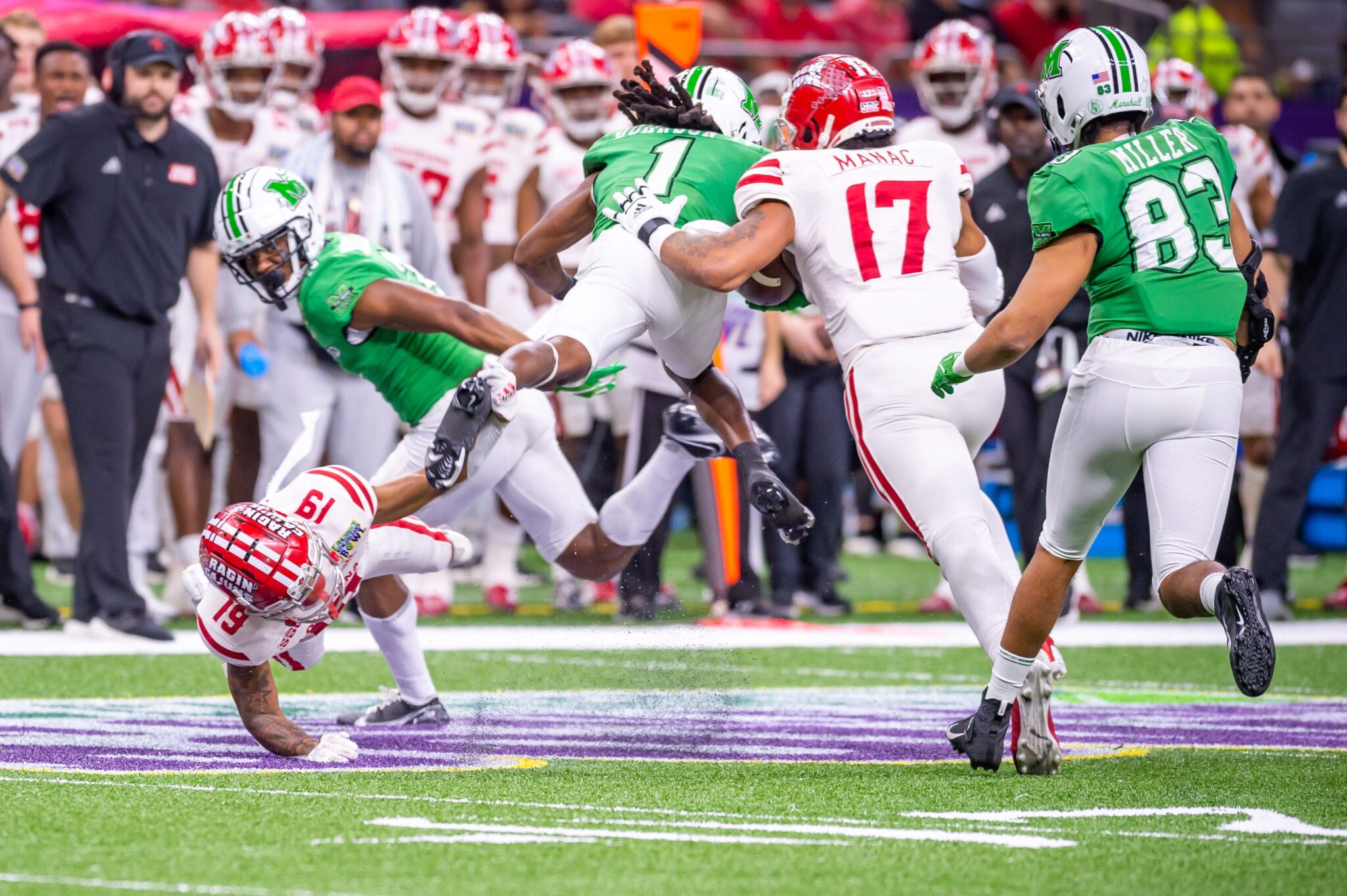 The postgame interviews kind of told the story. One team, a championship team, making the plays necessary to win. The other, a striving team, comes up a bit short at key moments.

That sums up how No. 16 Louisiana rallied for 20 points in the fourth period to knock off Marshall, 36-21, Saturday night in the R&L Carriers New Orleans Bowl at the Caesars Superdome in New Orleans, La. Attendance was 21,642.

“The guys coming back, I challenge them to be driven, to be better at closing the gap,” said Marshall head coach Charles Huff after wrapping up his first season with the Thundering Herd. “When you move to a new conference (Sun Belt in 2023) that happens. I’m not deterred from the process. Marshall is getting better. Maybe not as fast as everybody would like, myself included, but we’re getting better. We did some good things and we’ll continue to build on.

Louisiana quarterback Levi Lewis came in on the positive side as he passed for 270 yards and score and ran for 74 yards to end the season for the Ragin’ Cajuns on a program-record 13-game winning streak. The left-hander was voted bowl MVP in his final game with the program.

“You always want to go out the right way,” Lewis said. “It being the last game of the season, we really wanted to win.”

The game started the Desormeaux era for the Ragin’ Cajuns (13-1). Michael Desormeaux was promoted from offensive coordinator to head coach after the Sun Belt Conference title game when Billy Napier left to take over the Florida Gators.

“It’s kind of a little bit of an overwhelming feeling,” said Desormeaux, who also played quarterback for Louisiana-Lafayette. “I felt pressure to do a good job for our players because they deserved to win this game.”

The win didn’t come easily as Marshall (7-6) didn’t fall behind for good until less than 9 minutes remained. Louisiana, which had to rally from behind twice, went ahead to stay on Emani Bailey’s 4-yard TD run with 8:20 left. Lewis’ 54-yard pass to Michael Jefferson set up Montrell Johnson’s 3-yard TD run to widen the lead with 3:54 to go and Bailey scored again late for the final margin.

“We always know that no matter what we go through, we’ve got to keep our poise,” Lewis said. “Teams like us that’s experienced are just prepared for this moment.”

Marshall got a school-bowl-record 160 yards rushing from freshman Rasheen Ali and three scores to bring his season total to 25 (23 rushing). He scored on dashes of 61, 14 and 9 yards. The last gave the Herd the lead 21-16 in the third period.

Ali said he just trusted the process to pile up the yards.

“Patience was the key,” he said. “Trust the O line on who they’re going to block. I was more patient and trusting than I’ve ever been and it worked out.”

At quarterback, Grant Wells didn’t have a great night as he completed 15-of-26 passes for 99 yards (came in averaging 310 per game) and one pick. His longest completion went for 14 yards. Receiver Corey Gammage had his single-game best with nine catches, but for only 50 yards. Marshall had just 286 total yards to 498 for the Ragin’ Cajuns, which possessed the ball for more than 37 minutes compared to fewer than 23 minutes the Herd had it.

So it’s understandable for Huff to envy the Ragin’ Cagins a bit and long to benefit from this experience. The next time this situation arises, Huff’s hope is the Herd delivers.

“That’s a championship football team,” Huff said. “They’ve won [the Sun Belt] a couple of years in a row. They have some championship DNA. It’s been a while since Marshall’s been able to win a championship. It doesn’t happen overnight. There’s just some things, culture-wise, when you win championships, that you know how to do at the right moments, at the right time, that we’re still learning. I don’t question the guys’ effort.”

“There are ebbs and flows in championship level games that championship programs know how to battle through. That’s what we’re learning. I don’t have a switch. We played a championship program tonight. As we transition forward, we’ll be able to learn from this. I challenged the guys in the locker room. Don’t be angry; don’t be disappointed. Be driven. Maximize your opportunities from here on out. When you’re driven, you learn. When you’re angry or upset, you don’t.”

In the fourth period, while the Ragin’ Cajuns continued to pile up yards, Marshall managed just 15 total yards and zero points.

There was a scary moment for Marshall at the start of the fourth period when punt returner Willie Johnson got a helmet-to-helmet hit from Jayrin Wilson. After review, Wilson was called for fair-catch interference, targeting and ejected.

Needless to say, Herd players, coaches and fans showed their displeasure, maybe more than they should have.

“Championship teams don’t lose their cool. We’re still learning to do that,” Huff said. “That’s their player. He got hit really hard. Championship teams lock in. We’ve got some, not enough. No player on this team has won a championship. Make big plays when you have the opportunity to make a difference. You saw the difference. Are we close? Yeah. You guys are tired of hearing that. Yeah. My job is to measure the progress, not the results. We’re getting close.”

Marshall will begin the 2022 season Sept. 3 at home against Norfolk State. One player who won’t be around is senior lineman Alex Mollette. While some things went wrong Saturday night, he insists fortune for the Herd will change.

“We didn’t execute well enough,” Mollette said. “Too many self-inflicted wounds. I don’t think some people realize how close we are. Coach Huff said you might get tired of hearing that.

“Actually my time is done at Marshall. Some guys say the same old Marshall. Anybody who wants to jump off the wagon now, go ahead. We’re happier without you all. I have faith. As an alumni I know now that my guys are going to win a championship. Do it one way or another. Got the people leading them in place figuring out how they’re going to do it. We will be back. I’m forever a part of this program.”