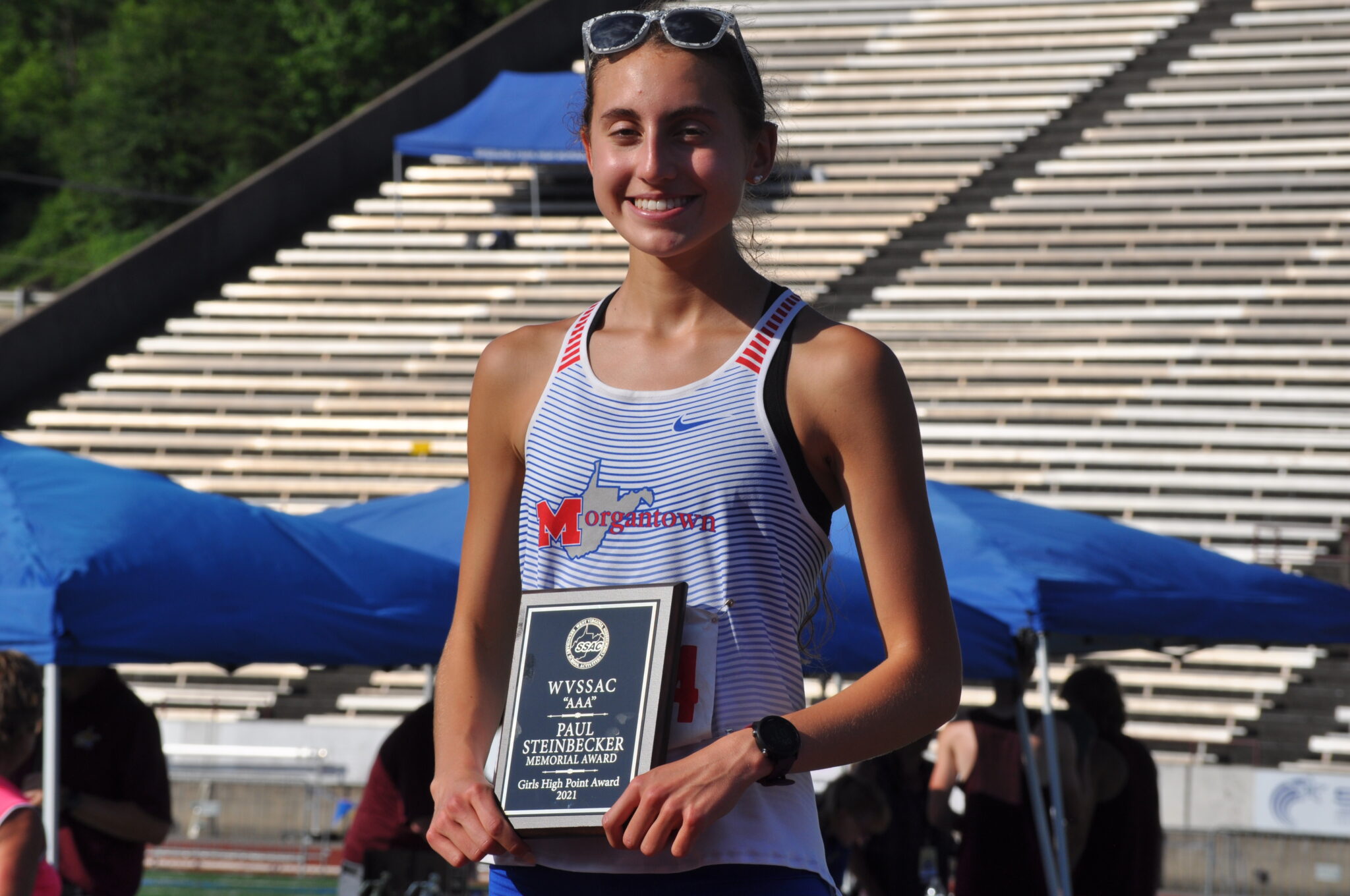 Morgantown High’s Irene Riggs made school history when she was selected as the McCoy Award winner as Female Track Athlete of the Year for 2021 by the West Virginia Sports Writers Association.

She is the first Mohigan, male or female, to achieve the feat.

“We have had track at Morgantown High for over 100 years and she is the first to ever win this award,” Riggs’ coach Mike Ryan said, proudly.

When COVID began to spread going into 2020 and things began to go into lockdown, many of us lost something that we loved to do. For Riggs, running was the one thing she could rely on to shift her focus away from the news of the ongoing pandemic.

Rewind one year to Riggs’ freshman year at MHS. The environment among the Morgantown track and field team is what she credits to helping her realize her potential when it comes to long-distance running in both cross-country and track.

“My freshman year was really fun and we had a great team,” Riggs said. “I was pushed a lot by my teammates, so when COVID came around and everything started to shut down, I was really said.”

Outside hobbies became a thing for many of us when the pandemic hit. Luckily for Riggs, her favorite thing to do was one of those hobbies.

“It defintely gave me something to focus on,” she said. “I was literally running every day and that was all I was doing. I even got my twin (Caroline) to come with me. She’s a swimmer and since she couldn’t go to the pool, I would take her to go run with me.”

Admittedly, Riggs did have a tough time mentally during the pandemic as national travel began to halt. At that point, there wasn’t a national event at all to focus working towards and Ryan used that to shift the focus of his runners to their teammates and getting better as a whole.

“Coach Ryan does a great job of keeping us focused on our team and not just ourselves,” Riggs said of her coach. “As a team that year, we were focused on traveling to the state meet and winning it as a team.”

MHS did just that, finishing in fiest with a sizable lead oveer second-place University. Riggs also won the state championship in the girls’ cross-country meet, running a time of 18:24.88, over 30 seconds ahead of second place.

Track season then came for Riggs ans when asked about a turning point in her early running career, she recalled running her personal best at the Night of 32’s event that was organized by Ryan.

“It gave me a hugh boost coming out of the pandemic because despite not running all the events that coach Ryan would normally have us do, I still saw the work paying off,” Riggs said.

“It’s a postseason race after the state meet and before any national events,” Ryan said. “It can be a real boost of confidence if you’re able to come to that event and run well.

“It can be like Friday night football. There is nothing better than a 2-mile with the lights on and people cheering. The gun goes off and everyone is trying their hardest. She stepped up to the plate on that one.”

When the state track and field meet came for West Virginia, Riggs was coming off heer personal best for cross-country, which helped her take state titles in every single

event she competed in individually and as part of a relay team. Riggs was first in the 800, 1600 and 3200 races for Class AAA girls. As well as MHS winning the 4×800 meter relay, she was the high point winner.

Eastbay hosted their annual cross-country national championship in San Diego, where Riggs competed against the top runners who qualified from four different regions. Riggs placed first in the region before going on to achieve an impressive 14th placxe finish, running a time of 17:48.5.

“I was able to meet some great people and face some amazing competition in San Diego,” Riggs told The Dominion Post in December.

Riggs will be honored at the 75th annual Victory Awards Dinner on May 1 at the Embassy Suites in Charleston.

Torrence Walker’s 2021 track season for Wheeling Park was so good that he even surprised himself at times.

“It was really shocking but at the end of the day, I realized that, with all the work I put in, I deserved it,” Walker said. “I wouldn’t have been where I was at, I wouldn’t have done all the things I accomplished without the support of the community I was in, my teammates, my coaches and family.”

In recognition of his outstanding season, Walker was voted as the winner of the McCoy Male Track Athlete of the Year award from the W.Va. Sports Writers Association. He will be honored at the 75th annual Victory Awards Dinner on May 1 at the Embassy Suites in Charleston.

Now a freshman at Virginia Tech, Walker said winning the award gave him a nice excuse to reflect on his high school career.

“I haven’t really been thinking about high school, I’ve jyst been stuck in college mode,: he said. “This made me go back and think about everything that went on in high

school and I’m just very thankful for the award.”

Walker said that the motivation for the 2021 season actually started two years earlier for the Patriots.

“My sophomore year we ended up being state runner-up and we were all really mad  and ready to go,” Walker said. “and then our junior year got taken away from us so senior year, we were ready to go.

“We ended up not having anybody to coach us for our indoor season so we were doing all our workouts on our own and once outdoors came, we were all locked in. It was a diffeerent mindset and that showed in all the work that we did behind the scenes and in the meets. We were just a powerhouse in the state.”

When the season started, Walker set goals for himself that now seem overly modest in hindsight.

Walker broke Park’s record for the 200 in the first meet of the season and came within .02 seconds of the 100 record as well.

“After that I was hungry,” Walker said. “Once I broke the records, I was dead set on extending it and sort of making it untouchable.”

Walker said the transition to a major college program like Virginia Tech was rough at first but he is settling into it nicely now.

“I’m pumped,” Walker said. “I’m ready to show everybody how hard I’ve worked this offseason and to finally get a time out and see where I’m at.”