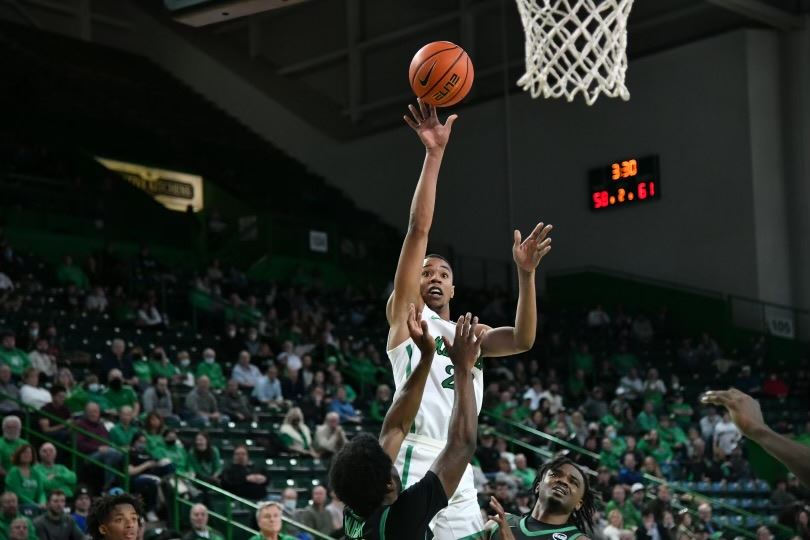 HUNTINGTON, W.Va. — North Texas made the big plays in the final minute to break a 65-all tie and defeat Marshall, 69-65, in Conference USA basketball Thursday night at Cam Henderson Center.

Marshall, which has made a habit of slow starts, did the same again Thursday night. North Texas got up by 10 at 26-16 on a three-point shot by J.J. Murray with 6:35 left in the first half. The visitors led 35-27 at the break.

The Herd took its first lead at 45-43 on an Andrew Taylor jumper with 12:19 to play. From that point, the lead went back and forth and excited the 3,818 fans in attendance.

Taevion Kinsey, who would finish with 29 points, took control in the late stages and hit a jumper to cut the deficit to 61-60.

However, North Texas got the next four points on two free throws by Abou Ousmane with 2:16 left (the Thundering Herd’s Darius George fouled out on that play). The 6-foot-10 sophomore scored on a follow with 1:39 to go for a 65-60 lead.

Kinsey then responded with a three and two free throws to get the Herd even at 65-65 with 1:01 to play. Tylor Perry connected on a runner in the lane to put the defending league champs back up 67-65 with 39 seconds left. Kinsey then had a shot blocked by Thomas Bell, Perry got the rebound, drew a foul and made both free throws for a 69-65 lead with 16 seconds on the clock. The Herd got off three shots in the closing seconds, but missed on each.

“I’m proud of Abou and all the guys for finding a way to win in a real tough environment,” Mean Green coach Grant McCasland said. “We had a lot of guys step up in key moments down the stretch.”

“I don’t like close,” Kinsey said. “Almost there, but almost isn’t enough. We have to get over that hump. I liked the team’s fight, effort. We just have to bring it out from the beginning.”

“We have to figure out the mistakes we made down the stretch and correct them,” Kinsey said. “Start terrible and it does not end well. It’s our home court. It shouldn’t happen.

“This year we have to figure out how to be better than them (Rice) on Saturday and ultimately come out with the win.”

Ousmane led North Texas with 22 points and 11 rebounds for a double-double and career highs in each category. Perry, the team’s top scorer who comes off the bench and is nearly a 93 percent foul shooter, added 12. Murray finished with 11 and Mardrez McBride and Bell netted 10 each. Bell also compiled 12 rebounds, career-high five assists and three blocks, including the late one on Kinsey.

George backed Kinsey with 18 points (7-of-9 shooting) before he fouled out. Obinna Anochili-Killen, the Herd’s No. 2 scorer, had just two points and blocked three shots to bring his season total to 66.

The Herd started with a taller lineup and a zone defense. Later, it went smaller and to a man defense against a team with the third most deliberate tempo in the country.

“Made some strides. It’s just one game. We’ve got to keep pushing forward. We make a lot of mistakes I’ve not seen before,” Herd coach Dan D’Antoni said. “When I brought George in, he brought the energy with him. When there are fewer possessions, mistakes are critical. We’ve got to play at our pace. We can’t let them dictate.”

In one area, change will be dictated by personnel.

“Start man and see what happens,” D’Antoni said. “I hope George can maintain his play. Keep Obinna in and get 15-16 (points a game). Get more from Andy. Looks like Taevion found his way. He got back to being Taevion. It’s not enough to play well. You have to compete well. Do that and you’ll probably play well.”