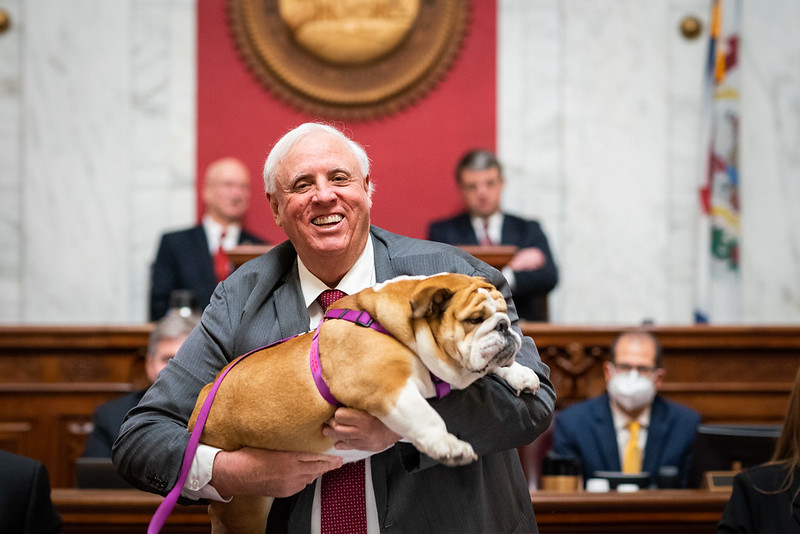 Gov. Jim Justice doesn’t see why anyone would quibble with displaying an English bulldog’s posterior during a formal speech in a legislative chamber in front of delegates, senators, justices, agency chiefs and corporate executives.

“I would think that first and foremost, anybody that would think negatively needs to take a few deep breaths and enjoy life a little bit,” Justice said today on MetroNews’ “Talkline.”

Justice concluded his State of  the State speech on Thursday evening with a rhetorical flourish meant as a statement about people who might doubt West Virginia’s successes.

He made reference to a comment about West Virginia the actress and singer Bette Midler apologized for making late last year. Turning his dog’s rear end directly to a camera broadcasting the speech for people to see, Justice proclaimed “Babydog tells Bette Midler and all those out there, kiss her hiney.”

The moment went viral, with photos and video circulating widely on social media.

Asked today about reaction, the governor focused on people outside the state. He suggested West Virginians would understand his sentiment.

“For those going stiffshirted, that’s the people’s Capitol,” he said.

The State of the State is a traditional occasion with the governor touting economic development and pushing for preferred policies. The event is in the House of Delegates chamber, where there are rules of decorum, such as a dress code for participants in floor sessions. There is no specific rule forbidding animals on the House floor.

House representatives have indicated the governor’s staff was told repeatedly that his dog was not to come to the chamber floor. Instead, the dog was led down the center aisle. Justice on today’s radio interview said he was not aware of any restrictions.

“I was told everything was approved,” he said. “Everyone was happy with what we’re doing and everything like that.”

House Speaker Roger Hanshaw, R-Clay, released a statement today that focused on factors other than the dog.

“I have been hoping for some time that West Virginia would gain national attention for our newly celebrated efforts to create, grow and champion a new and diverse 21st Century economy in the Mountain State,” Hanshaw said.

“I plan to continue doing the work that leads to large capital investments, creating countless new careers here in our state, and I continue to hope the spotlight will find us for the right reasons.”

During his speech,  the governor celebrated recent economic development announcements by Nucor’s Mason County steel mill, the GreenPower electric school bus project in South Charleston and the Owens & Minor health care products project in Morgantown. Representatives of those companies were present in the gallery.

Justice has gotten attention in the past for other rhetorical flourishes. A few years ago, while vetoing a budget bill, he displayed a platter of bovine excrement to represent his view. He has often employed phrases like “24-karat dog’s mess” to describe unpleasant situations.

He also has used his beloved bulldog in a range of political situations over the past year or so, naming a pro-vaccination effort “Do It for Babydog.”

Today, he said people should just enjoy the dog.

“I think it was done in a funny way about a little bulldog that makes a lot of people smile and laugh. Anybody that would think of that in a negative way, I feel sorry for them. They’re jealous. They’re jealous of West Virginia,” he said.

The governor, who the prior night had told haters to kiss his dog’s rear, today said everyone should love her.

“Everybody smile about Babydog. She loves everybody; we ought to love her too.”

.@WVGovernor gave his State of the State address last night. He joins @HoppyKercheval about his speech, including using Baby Dog at the end of his speech. WATCH: https://t.co/yCFQ3nDJuy pic.twitter.com/OU8U76qFr4