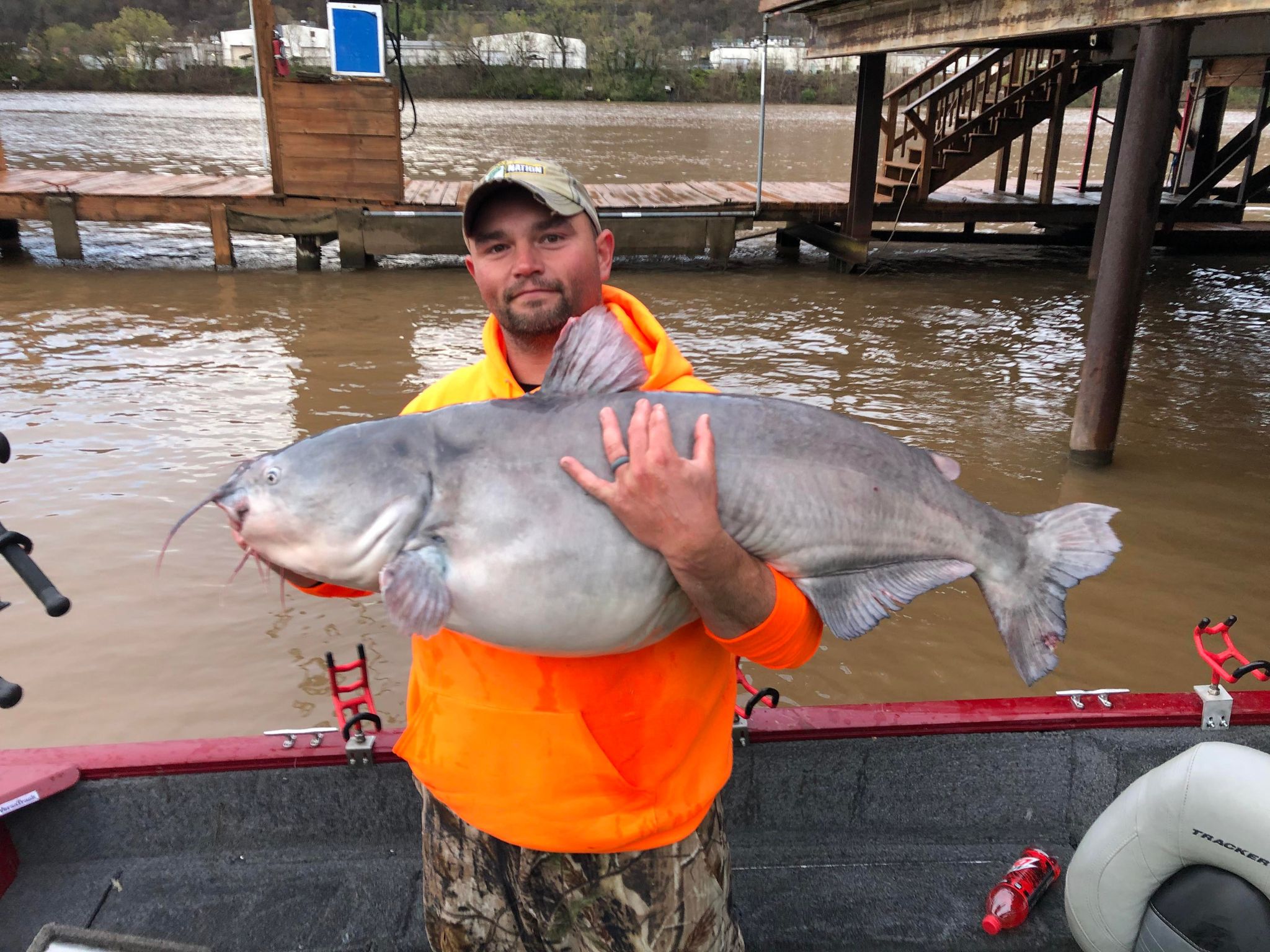 MARMET, W.Va. — When Cody Carver of Dry Branch, West Virginia got a call from a buddy about some catfish bait back on April 8th, he wasn’t overly excited about the prospects of success. The temperature was down, the river was up, and the rainfall was pouring intermittently in the Kanawha Valley.

“It was real nasty weather, we started not to even go, but I already had the bait, so me and my buddy Shawn went. We anchored up on the first spot and we probably fished 30 minutes and I caught that fish,” Carver said in an interview for West Virginia Outdoors.

Listen to “Cody Carver on Record Blue Catfish for WV Outdoors” on Spreaker.


The fish was actually the second one they had caught. Just a few minutes earlier the buddies boated an 18 pound flathead catfish, which was the species they were after. The one which changed Cody’s day, and in many ways his life, was a blue catfish which ended up being the new West Virginia State Record for weight.

“The water was up pretty high, but we went up the river and got on an inside bend. We anchored up on the inside bend since it wouldn’t be as swift as the outside,” he explained.

The setup isn’t the typical place you catch blue cats, which made the bite even more surprising.

“For me it’s a little harder to catch those. I haven’t fished for them much. The best way to target them is to drift, but I’m just getting into that. I anchor fish all the time, which is how I caught that one. I was actually fishing for flatheads,” he said.

Carver isn’t a novice. He has the rig and the equipment to handle big catfish. He routinely pulls some monsters out of the Kanawha River which is only a stone’s throw from home and even closer to work at the machine shop in Belle where he’s employed as a mechanic. Carver admitted, sometimes being that close to the river caused him to want to knock off early for the day from time to time.

With the big fish secure Carver’s partner was insistent he had a new record, so they started making phone calls.  Finally a friend of a friend got hold of DNR Fisheries Biologist Ryan Bosserman who quickly dropped what he was doing on a weekend to head to a meeting spot on the river. The scale told the story at 61.28 pounds. It broke the old record weight 59.74 pounds held by Mark Blauvelt. However, the length record of 50.15 inches held by Justin Goode still stands. Carver’s fish was 45.51 inches.

Cody Carver of Marmet caught the new state record blue catfish on the Kanawha River this month, and once certified, released it in good shape. He shares the story this weekend on WV Outdoors. pic.twitter.com/x9SJ4kvOic

The blue catfish was reintroduced into the waters of the Kanawha and Ohio Rivers in the past 20 years. They have thrived since the reintroduction as the records continue to be broken with some regularity as the fish grow rapidly. Carver knew there was always a chance, but never dreamed he’d put his name into the state’s record books.

“You always think you might, but in reality, I never thought I’d catch it. Anytime you put a bait in the water, the chance is there to catch a record fish. I’ve caught a lot of big fish, but never thought I’d get one like that,” he said.

Outdoors
Beagle owners from far and wide come to W.Va. for competition
Beagle owners from all over the country share their passion for breeding and running champion hunting dogs in a recent West Virginia field trial.
By Chris Lawrence
Outdoors
Pennsylvania angler lands a state record fish on a miserable day
Fishing in torrential rain, Ayden Minick of Mt. Pleasant, Pa. hooked into a beast while taking part in a fishing get together with friends on Summersville Lake.
By Chris Lawrence
Outdoors
They come from a long line of loggers
West Virginians continue to dominate competitive lumber jacking and will be at center stage this weekend when the 2022 Stihl Timbersports Series cranks up at Virginia Beach.
By Chris Lawrence
Outdoors
Multi-Million dollar upgrades at Bowden Hatchery near completion
DNR has spent close to $12 Million to modernize and improve the Bowden Trout Hatchery in Randolph County.
By Chris Lawrence
View AllHoppy's Commentary