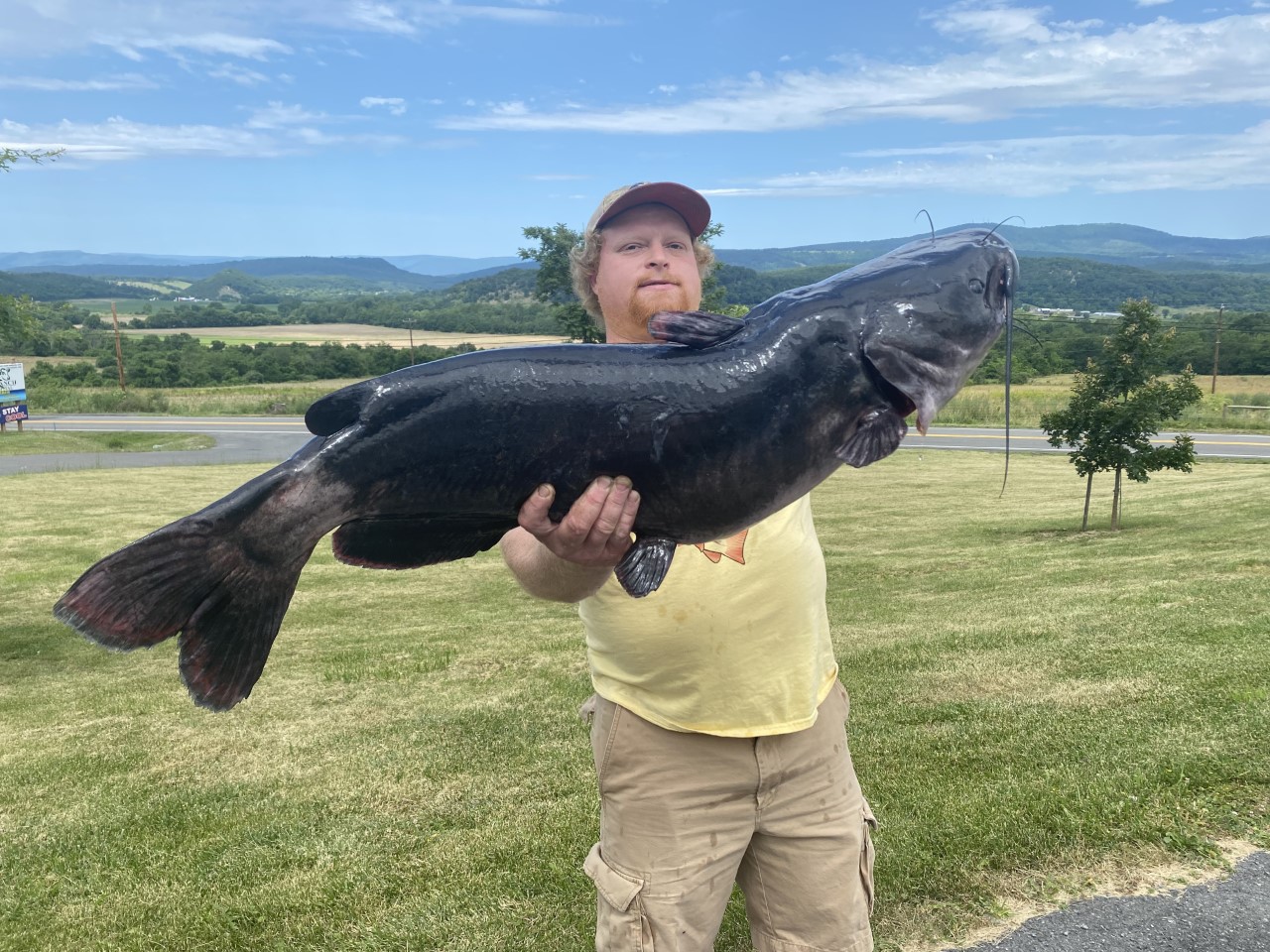 GRANT COUNTY, W.Va. — When Allen Burkett of Broadway, Virginia got off work at the Pilgrim’s Pride plant in Moorefield back on Monday evening, he was hoping the catfish bite would be on at South Mill Creek Lake.

He and friends headed there to wet a line and relax for the final hours of West Virginia Day. But the bite wasn’t near what he had hoped. Close to 11 p.m. they decided to call it a night, but just as they moved to start packing up, things changed.

“We were getting ready to pack up and the old pole bent down and the drag took off,” Burkett told MetroNews.

He was immediately sure he had a big fish on the other end of the line.

“It was one heck of a fight. I didn’t think I was going to get him in. He started to go around a tree and I was pretty sure I wouldn’t get him, but for some reason he turned away from that tree and went on down the lake,” he said.

The fight lasted another 10 to 15 minutes until Burkett was able to wrestle the fish into the shallow area near the shore. The fish was such a giant, it took both hands to lift him out of the water.

“He was so big, I thought at first he was a blue cat. I didn’t know there could be a channel cat that big,” he said.


He immediately knew the fish would be flirting with state record size. He put the fish in a tote with water, but wasn’t able to make contact with DNR Biologist Brandon Keplinger until the next day. Using scales at the Moorefield Southern States they certified the fish weighed 36.96 pounds. It stretched the tape measure to 40.59 inches. Both measurements were new state records for the channel catfish.

The old record was 40.3 inches on the length and and 33.42 pounds on weight for a fish caught in 2005 by Michael Sears on Patterson Creek.

Although Burkett tried to keep the fish alive for a release, it wasn’t to be.

“He didn’t make it. He was just too weak to return to the water. It would have been nice to have gotten him back as big as he was. But I was able to fillet him up and got quite a few bags of meat out of him. We’ll be able to have a fish fry out of just that one fish,” he said.

It’s the fourth state record fish caught in West Virginia this year and the 11th in the past two years.

Outdoors
Elk calves for 2022 are showing up on the Tomblin WMA
Elk project leader Randy Kelly said it's hard to say with any certainty just how many calves are out there.
By Chris Lawrence
Outdoors
Tour de Coal weekend is underway
Group celebrates 19 years of the event which has grown into one of the largest of its kind in America.
By Chris Lawrence
Outdoors
Monongahela National Forest awarded nearly $7 million for deferred maintenance
Seven projects across the Million acre federal forest aimed at improving public access and conservation work.
By Chris Lawrence
Outdoors
It's free fishing weekend in West Virginia
Annual license free day is aimed at getting adults who have never fished to give it a try and for those who used to fish but stopped a chance to rediscover the fun for themselves and their children.
By Chris Lawrence
View AllHoppy's Commentary