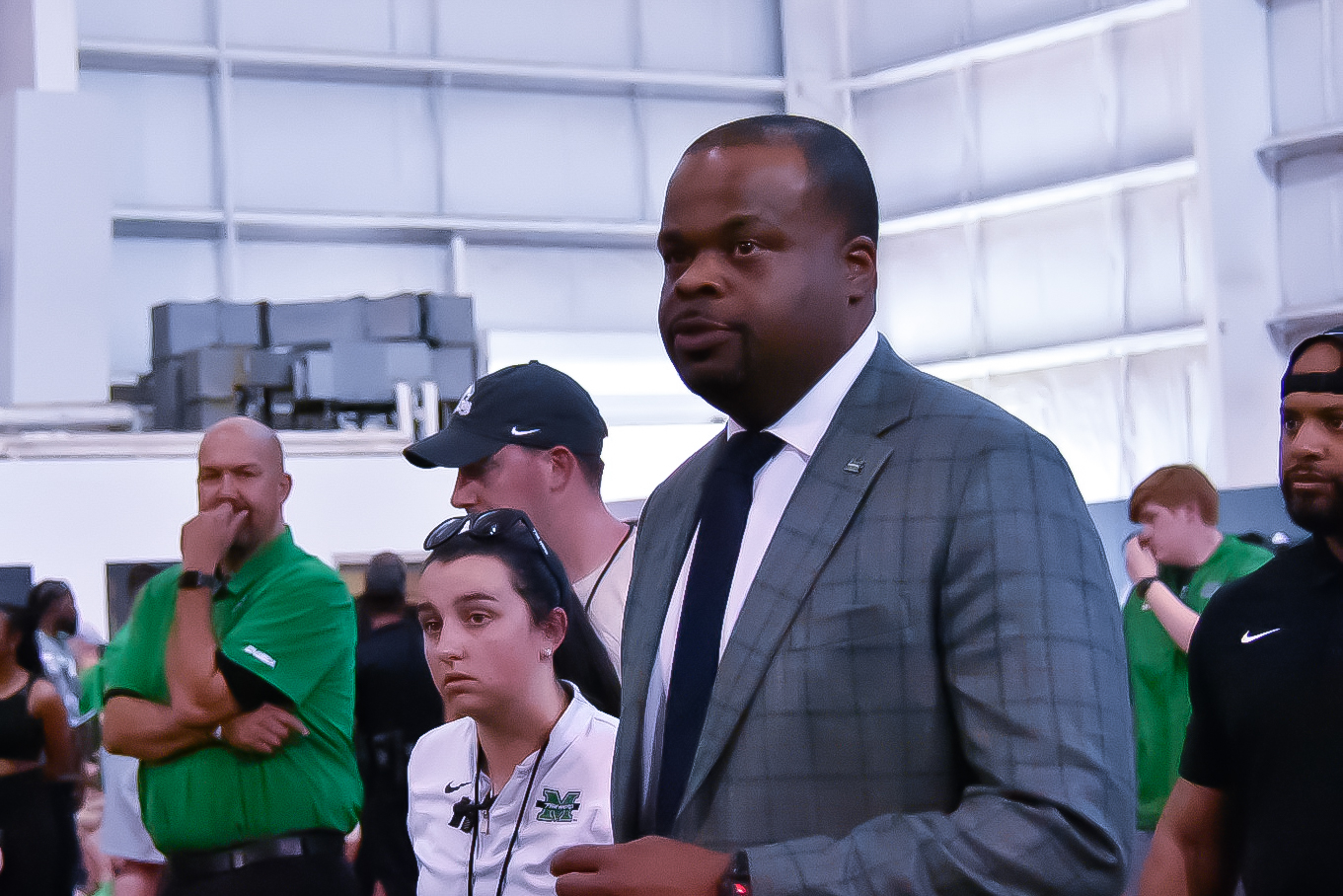 HUNTINGTON, W.Va. — With fall semester beginning in exactly one week at Marshall, Thundering Herd football coach Charles Huff is holding what he believes are critical work sessions as the team enters the second full week of preseason camp.

Marshall scrimmaged Saturday at Joan C. Edwards Stadium and the second-year head coach offered positive reviews of what he saw.

“It was a good day, especially because no one got hurt,” Huff said. “Guys got proper reps. We were able to move some guys, especially on the offensive line and we got to evaluate the quarterbacks.”

Huff said that performances were a bit unbalanced in the scrimmage, with the offense having the upper hand early, before the defense caught up.

“The offense started fast with runners breaking some tackles and gaining some good yards after contact, plus we hit some passes downfield,” Huff said. “After a slow start, the defense battled back and did a good job of running to the ball.

“Even our kickers got to work with some pressure around them.”

A pair of Florida State transfers caught Huff’s eye in the scrimmage — running back Khalan Laborn, who had a tackle-breaking 80-yard touchdown run early in the scrimmage, and redshirt freshman safety Jadarius Green-McKnight, who made multiple plays tracking throws and making strong hits.

Huff also singled out true freshman kicker Rece Verhoff for his length on kickoffs, redshirt freshman punter John McConnell for more consistent performances and the overall leadership among MU specialists, which long snapper Zach Appio has had a hand in providing.

Although he’s not officially awarded the starting quarterback job to Henry Colombi, Huff says the Texas Tech transfer is showing his credentials to earn the position.

“You can see that he has a veteran’s presence,” Huff said. “Nothing rattles him or puts him off-kilter. He’s taken a leadership role when he’s on the field and he does a good job with his off-the-field preparation.”

Huff believes his team is on schedule through the opening week of preseason camp.

“We’re in a good spot after Week 1,” Huff said. “We’ve got a long way to go. We’ve got to narrow down who can do what this week.

“This week we’re going to work on focus, then next week, we’ll work on preparation prior to our first game week.”

Marshall opens the season at home on September 3 against the Norfolk State Spartans of the Mid-Eastern Athletic Conference. That contest will begin at 3:30 p.m. and air on ESPN3.

A day for the family

Marshall players had a familiar audience during Saturday’s scrimmage — their families. Parents and siblings of Herd players were invited to spend time around the football program over the weekend.

All were treated to a buffet dinner in the Joan C. Edwards Stadium west concourse following the scrimmage.