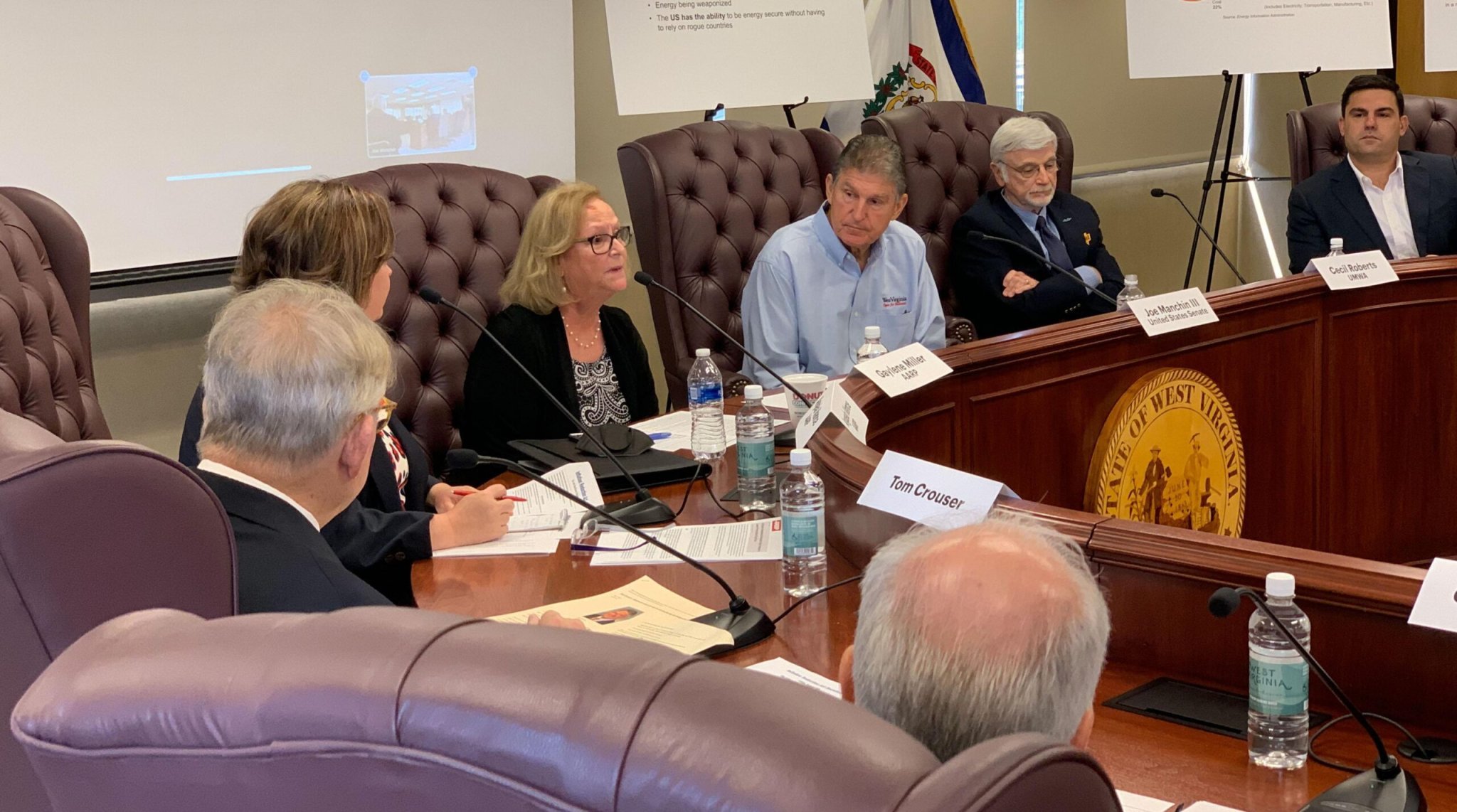 CHARLESTON, W.Va. — U.S. Sen. Joe Manchin, D-W.Va., is fully aware of the ever-shifting feelings toward him.

He received criticism from the White House and Democratic colleagues and kudos from Republicans last December when he announced his opposition to the sweeping Build Back Better framework. When he introduced the Inflation Reduction Act in July alongside Senate Majority Leader Chuck Schumer, D-N.Y., Democrats were eager to consider the legislative package amid Republican objections.

“I can be the hero and the villain, all in a 24-hour period,” he said during a roundtable discussion in Charleston on Friday.

“Nobody in their right mind would go through what I have gone through with my staff for the last eight months, taking all the crap we’ve taken from everybody in the country, and come back and say, ‘Boy, that felt so good. I want to do some more of that.'”

Reaction to Manchin and the Inflation Reduction Act have continued in the wake of President Joe Biden signing the bill into law last Tuesday. Manchin spent Friday’s forum — attended by energy leaders and various advocates — touting the law’s anticipated impact.

“This is a piece of legislation — if we keep our heads down — we can show them what can be done,” he said.

Work on the proposal began in April, months after Manchin rejected the broader Build Back Better framework. The senator worked with Schumer on creating the package; Manchin stated Friday he “didn’t need a lot of cooks in the kitchen” in drafting the legislation.

“This is a major transformational bill that we’ve never seen anything like it before. Having a bill of this magnitude and what it could do to transform our state, it’s hard to conceive it in the one week since we’ve passed it,” Manchin told reporters after the roundtable.

The Democratic majorities in both congressional chambers united in getting the related bill to Biden’s desk. The Senate voted 51-50 on Aug. 7 — with Vice President Kamala Harris casting the final vote — and the House of Representatives passed the bill in a 220-207 vote days later. The Senate approved the measure with a simple majority through the reconciliation process.

Schumer previously described the Inflation Reduction Act as “the culmination of one of the most productive stretches” of the current Senate. Lawmakers passed legislation addressing gun violence, computer chip production and benefits for military veterans during the summer. Republicans, however, had joined Democrats on each of these votes.

“This legislation was not designed to be bipartisan. The budgetary process is by its very nature almost always a partisan exercise,” Sen. Shelley Moore Capito, R-W.Va., told MetroNews.

“We can forge compromise when we have a seat at the table. We had no seat at this table,” Capito said.

A central item in Republicans’ opposition to the law involves the IRS. The agency will receive nearly $80 billion for hiring new workers and internal improvements. Commissioner Charles Rettig told senators in an Aug. 4 letter that additional funding would help the IRS perform audits of corporations and wealthy Americans. Rettig noted the agency has the fewest number of employees since the 1970s.

The law does not include tax increases on Americans making less than $400,000 a year. The Joint Committee on Taxation has delivered analysis suggesting the law could affect some higher-earning taxpayers.

Capito said there are concerns about “the big brother” aspect of the tax enforcement provision. She said she agrees with improving the IRS’ technology and infrastructure, but the agency struggles to hire new workers with its current budget.

“They’ve shown an ineptness here, and I think people look at them skeptically,” she said.

“This is a provision I think is highly suspect and causes a lot of concern,” the junior senator added.

Treasury Secretary Janet Yellen has instructed the IRS to not use the funding for auditing small businesses or households making less than $400,000. Yellen told Rettig in an Aug. 10 letter the agency should focus on “high-end noncompliance” involving large corporations and wealthy individuals.

Capito is doubtful. She mentioned the Senate could have passed an amendment preventing the IRS from launching additional audits against individuals making less than $400,000. The Senate failed to approve the proposal.

Manchin said there are guardrails in the law regarding additional audits.

“If you think somebody’s harassing you and coming after you and targeting you, call me. Call my office, and we’ll take care of that for you,” he said.

The law includes steps related to energy production. Billions of dollars are directed toward reducing emissions at coal and natural gas plants and decarbonizing various facilities. There are also tax credits for electric vehicles assembled in North America and energy efficiency upgrades to buildings. Proponents of the law are hopeful the provisions will put the country in a position to reduce greenhouse gas emissions by 40% from 2005 levels before the next decade.

The Inflation Reduction Act additionally expands investment tax credits for clean energy manufacturers. Companies would be eligible for a $4 billion pool if they start operations in areas impacted by coal’s downturn.

Manchin has tried to include funding for this effort in the past. The senator and Michigan Democrat Debbie Stabenow introduced related legislation in March 2021, and legislators attempted to include the matter in last year’s infrastructure law.

“If you bring new technology to our area because of the downturn of our fossil and the coal industry, you’re able to get a 30% tax reduction,” he said. “That’s a tremendous attraction on top of everything else.”

The Inflation Reduction Act permanently extends the Black Lung Disability Trust Fund by setting the excise tax on coal mined underground to $1.10 a ton and the tax on surface coal to 55 cents per ton. Congress failed to renew support for the fund before the end of last year.

Cecil Roberts, the president of the United Mine Workers of America, applauded Manchin for the Inflation Reduction Act.

“The senator got all kinds of grief here because he mainly was defending the coal industry and other fossil fuel industries to preserve jobs here in Appalachia,” Roberts told MetroNews. “He finally got something he thought was fair, and I applaud him for that. I think this was a good outcome.”

The United Mine Workers of America was among the groups that pushed Manchin to support the Build Back Better plan and shared disappointment when Manchin announced his opposition.

“They always say that there’s two things that you don’t want to see being made: hot dogs and legislation,” Roberts joked. “I’ve never been to a place where they’re making hot dogs, but I understand it’s a pretty difficult process.”

Capito said the law’s investments in clean energy “accelerates” coal’s decline. She did describe the Black Lung Disability Trust Fund provision as a “bright spot” of the new law.

“Taking care of that segment of the population is extremely important to me,” she said.

The law does not include an additional $45 million for the U.S. Environmental Protection Agency. The Senate parliamentarian removed the funding after a Republican challenge.

Capito proposed an amendment to eliminate the funding, but the Senate did not approve the provision during the chamber’s vote-a-rama. She told MetroNews the agency could have directed the funding to implement regulations overreaching its authority.

“I was lucky to get it out because I think it would have had grave impacts, I think, for the EPA to enact hurtful energy policies, particularly as it relates to coal,” she said.

Senators failed to pass multiple amendments during a lengthy consideration period earlier this month. One of the amendments would have extended a $35 limit on insulin costs to commercial health plans; the law does have such a cap on insulin under Medicare.

The Senate failed to meet a 60-vote threshold to extend the limit to commercial policyholders. Capito and 42 Republicans opposed such language.

Capito told MetroNews she had been working with colleagues on a bipartisan proposal addressing insulin costs. She stated she did not think the language in the bill was explicit enough to limit costs.

“It was kind of just thrown in at the last minute. It wasn’t well researched in terms of how they were going to put this mechanism in,” she added.

As part of an agreement between Manchin and Democratic leaders, Congress will consider changes to the permitting process once lawmakers return to Capitol Hill next month. Related legislation will include steps to speed up approval of energy projects as well as the completion of the Mountain Valley Pipeline, a 303-mile system capable of transporting natural gas from West Virginia to southern Virginia once complete. The project has been marred by legal challenges.

Manchin said the language will be in a continuing resolution to fund the federal government for when the new fiscal year begins Oct. 1.

“This is something the Republican Party has wanted for the last five to seven years I’ve been with them,” he said.

“It either keeps the country open, or we shut down the government. That’ll happen Sept. 30, so let’s see how that politics plays out.”

Capito wanted the Senate to consider permitting reform ahead of the vote on the Inflation Reduction Act. During the amendment process on the domestic policy package, she and Oklahoma Republican Jim Inhofe pushed language enacting permitting changes.

“What kind of interest is there in permitting reform?” she said. “I think by stuffing it into a larger bill, I’m not even sure that’s a mechanism that is going to be successful. It’s going to be interesting to see how all of this fleshes out in September.”

The Senate will return to Washington, D.C. on Sept. 6. The House’s next votes are scheduled for Sept. 13.