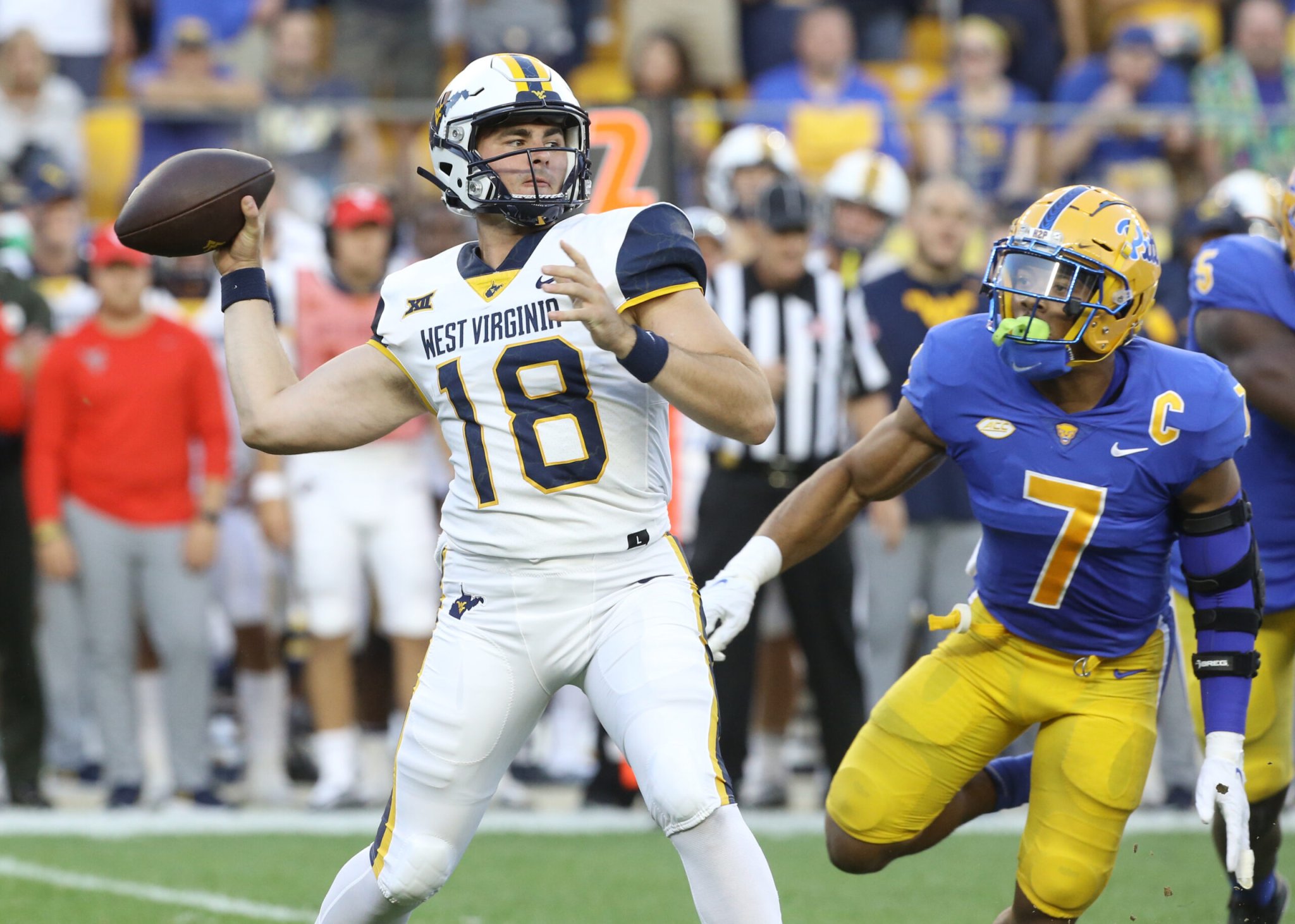 MORGANTOWN, W.Va. — Of all the traits quarterback JT Daniels displayed in his West Virginia debut, none stood out more to offensive coordinator Graham Harrell than Daniels’ ability to stand tall and remain composed in the face of pressure.

Statistically, Daniels didn’t have an eye-opening showing, completing 23-of-40 passes for 214 yards with two touchdowns and an interception. Consider, however, that he was sacked three times, hurried eight and took several jarring hits against a physical front seven from Pitt. Additionally, the interception was the result of one of several drops that prevented Daniels from having a better completion percentage and perhaps 300 yards.

“You don’t ever want a guy to get injured, but it’s a violent game. You’re going to take some hits and the really good ones continue to stay in there and play,” Harrell said. “That’s maybe what I was most proud about with JT — when he did get hit, he never started looking at the rush or throwing bad balls because pressure was coming. He continued to stand in there and play the way he had before he took the hit.”

“The more teams have hurt Narduzzi from the pocket, the more he’s sent five and six-man pressure,” Daniels said. “That’s not an offensive line thing. They have a really good front seven and they send six. That’s six 1-on-1 blocks, including your running back. Your quarterback is going to take hits. That’s him philosophically and part of my position and what I have to do.”

Two of Pitt’s three sacks came on the Mountaineers’ final offensive sequence, which forced WVU into a fourth-and-16 it was unable to convert.

That possession followed M.J. Devonshire’s interception return for a touchdown, marking Pitt’s second TD in 43 seconds and making all the difference in the Panthers’ 38-31 win.

Yet Daniels nearly led a potential game-tying drive in response to the pick six. With the momentum in Pitt’s favor and the Mountaineers up against the clock, Daniels extended a play and found tight end Mike O’Laughlin for 32 yards, putting WVU just outside the zone.

“With people around him, he never once shied away from a throw,” Harrell said. “He took some shots and never started getting his eyes down and seeing the blitz or feeling things that weren’t actually there. That’s encouraging and if he continues to do that, he could have a really special year.”

The two sacks in a span of three plays followed, before Daniels threw to wideout Reese Smith in tight coverage for what was originally ruled a 27-yard catch to the Pitt 1, but overturned to an incompletion that sealed the outcome.

The pass was inches from being completed and further proof the hits hardly bothered Daniels, who nearly led a miraculous 2-minute drive that could’ve sent the game to overtime.

“You really don’t think twice about it,” Daniels said. “There’s definitely a few shots I took, but nothing I was severely hurt by. You get back up and keep going. You have too much adrenaline and a lot of pads on. It’s pretty hard to take someone out.”

Daniels’ past experience at both USC and Georgia, where he spent two years each, helps him deal with pressure and handle situations that arise throughout games.

Yet this was his first showing at West Virginia, and as a late arrival that missed spring practice, there was an element of unknown leading into the Backyard Brawl.

Even in a loss, the Mountaineers look to have solidified their quarterback in Daniels, who wasn’t announced as the starter until three days before kickoff.

“I felt like he’d be even-keeled,” head coach Neal Brown said. “Didn’t feel a hit, dropped pass or any kind of setback would bother him. He was really even-keeled. He was really good in game being able to tell you what he saw. That’s not the case with every quarterback, so that was extremely positive.”

In a raucous environment that featured the largest crowd for a Pittsburgh sporting event at 70,622, Daniels’ poise was on display plenty.

“It’s never been an issue for me,” he said. “I enjoy the overall environment. It’s really cool to be on the field and every now and then, you try and take it in and really listen to how loud it is. You hear people yelling your name and some fun stuff, but in general, there’s so much going on and so much I’m focused on, it doesn’t really creep into your mind that much.”

Daniels has spent this week preparing for his first game at Milan Puskar Stadium, which comes at 6 p.m. Saturday when the Mountaineers welcome Kansas for their home and Big 12 opener.

It’s an opportunity for West Virginia to start conference play on a winning note and show it’s moved past the sting of last week’s rivalry loss against what Brown and the coaching staff believes will be one of college football’s most improved teams.

Dating back to last season, the Jayhawks’ last four games are a 57-56 overtime win over Texas, a three-point loss to TCU, a six-point loss to West Virginia and 56-10 victory against Tennessee Tech to open the 2022 campaign.

“Something that’s impressive in this team that matters a lot, as soon as you watch the final play of Pitt, that’s the last you talk about them,” Daniels said. “I haven’t seen anybody in low spirits or thinking about last week. You put it to bed and move on. There’s always the potential for a challenge of me to get guys focused on this week, but it’s not a challenge that’s presented itself. Guys are locked in on Kansas and ready to play Kansas.”