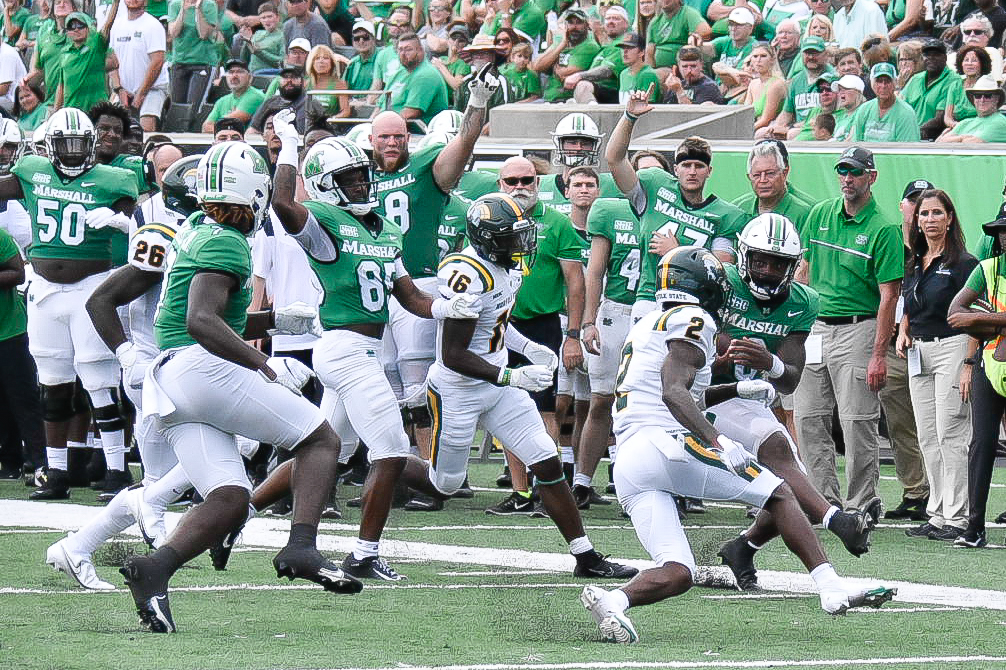 Marshall’s football team gets a rare opportunity to prove itself on a national stage Saturday afternoon at legendary Notre Dame Stadium in South Bend, Indiana when the Thundering Herd plays a long-anticipated contest against the 8th-ranked Fighting Irish of Notre Dame.

The game kicks off at 2:30 p.m. and will be shown nationally on NBC.

This is the first meeting between Marshall and ND.

Notre Dame coach Marcus Freeman is in his first season after guiding the Fighting Irish defense last season under former head coach Brian Kelly, who now has the same title at LSU. Freeman also led Notre Dame in its 2021 Fiesta Bowl appearance against Oklahoma State, a 37-35 loss for the Irish.

Marshall took care of business in its opening game last week, pummeling FCS opponent Norfolk State 55-3 at Joan C. Edwards Stadium. Later that night, Notre Dame was shutout in the second half of a 21-10 season-opening loss at Ohio State.

Here are three things to look for in Saturday’s contest:

HANDLING THE BIG STAGE: Marshall players and fans have been focusing on the Notre Dame game since the deal to play once was announced three years ago by former Marshall Athletic Director Mike Hamrick.

MU coach Charles Huff has downplayed the greater significance of the contest for his program, calling it “the next game on the schedule.”

The benefits of a win are immense — plenty of national attention, a selling point for recruits and creating excitement for what could be ahead the rest of the season, including a likely increase in attendance and a chance at the Sun Belt Championship in Marshall’s first year in the league.

It should help that several Power 5 Conference transfers are on Marshall’s roster this fall — players that are used to playing in big-time atmospheres and understanding what it takes to overcome the advantages of such opponents.

AN ENCORE FOR THE BACKFIELD: Marshall’s offense was on fire last Saturday against an overmatched Spartans’ team.

The Herd rolled up 612 yards of offense, 380 of it on the ground. The Herd’s 1-2 running back tandem of Khalan Laborn and Ethan Payne ran through the Spartans’ defense for a combined 215 yards and four touchdowns, with both going over the 100-yard mark.

Impressive numbers, but the job gets tougher against a Fighting Irish defense that was stingy for most of last week’s game at Ohio State.

The normally prolific OSU offense eventually rolled up 395 total yards, but most of that total came in the second half when the Buckeyes outscored Notre Dame, 14-0.

An angry Notre Dame defense would love to make things tough for Laborn, Payne and the newcomers on Marshall’s offensive line.

Herd quarterback Henry Colombi’s ability to make plays with his feet could be valuable in continuing drives against the Fighting Irish and take some pressure off of Laborn, Payne and the line.

THE MICHAEL MAYER EFFECT: Notre Dame’s offense is filled with lots of new faces, including sophomore starting quarterback Tyler Buchner, who threw for 177 yards in his debut last week.

Mayer had five catches against the Buckeyes for 32 yards, specializing in plays that kept first-half drives alive for the Fighting Irish. Mayer is just as effective as a blocker and Huff referred to him as a “matchup nightmare.”

“They try to get him in advantageous positions and a lot of their offense trickles down from teams focusing on him,” Huff said.

Too much focus on Mayer could open things up for Buchner to get the ball in the hands of talented wide receivers Brayden Lenzy and Lorenzo Styles.