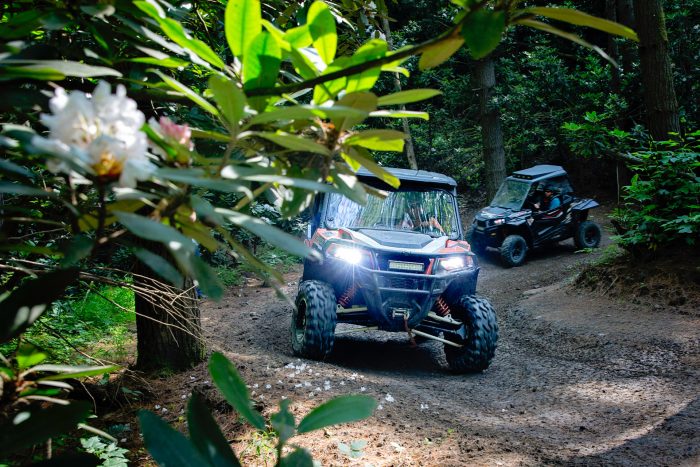 Riders on the Cabwaylingo State Forest, the only state park or forest where off-roading is currently allowed. PHOTO: WV State Parks

Members of the Parks, Recreation, and Natural Resources Subcommittee heard presentations from both sides about the pros and cons of opening up West Virginia’s State Parks to mechanized riding during the interim committee meetings in Charleston.

Advocates believe West Virginia is missing the mark in the mid-Atlantic with the current prohibition. Some believe as a user group, the off road enthusiasts should have a greater access to public lands in the Mountain State because of the economic power they wield for investment in the state.

“I think West Virginia’s terrain and opportunities are actually a lot better than other states. It tells me the policy environment probably could be more welcoming and the state could be investing more in attracting outdoor recreation industries to the state,” said Ben Burr in a presentation to the sub committee.

Burr is the Executive Director of the Blue Ribbon Coalition which fights for access to public land nationally for a wide range of mechanized use, including off-road vehicles.

He told lawmakers all of West Virginia’s surrounding states have a much higher level of revenue and interest from off-road enthusiast because of their friendlier policies. According to Burr, Ohio ranked 8th, Pennsylvania ranked 6th, Maryland 23rd, Virginia 16th, and Kentucky 28th in the value added to the outdoor recreational economy. He said West Virginia never ranked above 40th in the category.

“There’s a lot of states that have made those kinds of investments and the tend to see a good ROI and the outdoor recreation industry does look for those policy invitations to come into different places,” he explained.

However, retired State Parks Chief Sam England and retired longtime Park Ranger Scott Durham were adamantly against the idea. Although neither had a problem with off-road riding, they did not believe State Parks is the place for it.

“Most citizens enjoy ORV use, no question, but the overwhelming majority of citizens are not in favor of those same off-highway vehicles on their parks,” said England.

Three years ago, the park system decided to give ATV’s on managed State Park lands a try. There was an allowance for off-road vehicle use on Cabwaylingo State Forest. It’s a 9,000 acre area and one of the largest tracts of public land in the state. It’s a State Forest, but the recreational part of the land is managed by the State Park system. According to Durham, during the three years of the trial run, occupancy at Cabwaylingo’s lodging only increased marginally, but the user groups changed dramatically.

“Use of off-road vehicles on public land displaces all other users,” he said.

Durham blamed noise as the top reason people were driven away from Cabwaylingo when off-road riding was allowed on a trial basis.

England encouraged lawmakers to carefully look at the State Park mission, which was to set aside special places to be preserved in nature. He said State Parks make up less than one percent of the state’s property.

“Surely we can take this one percent, set it aside, and say, ‘These places are special,'” he said.