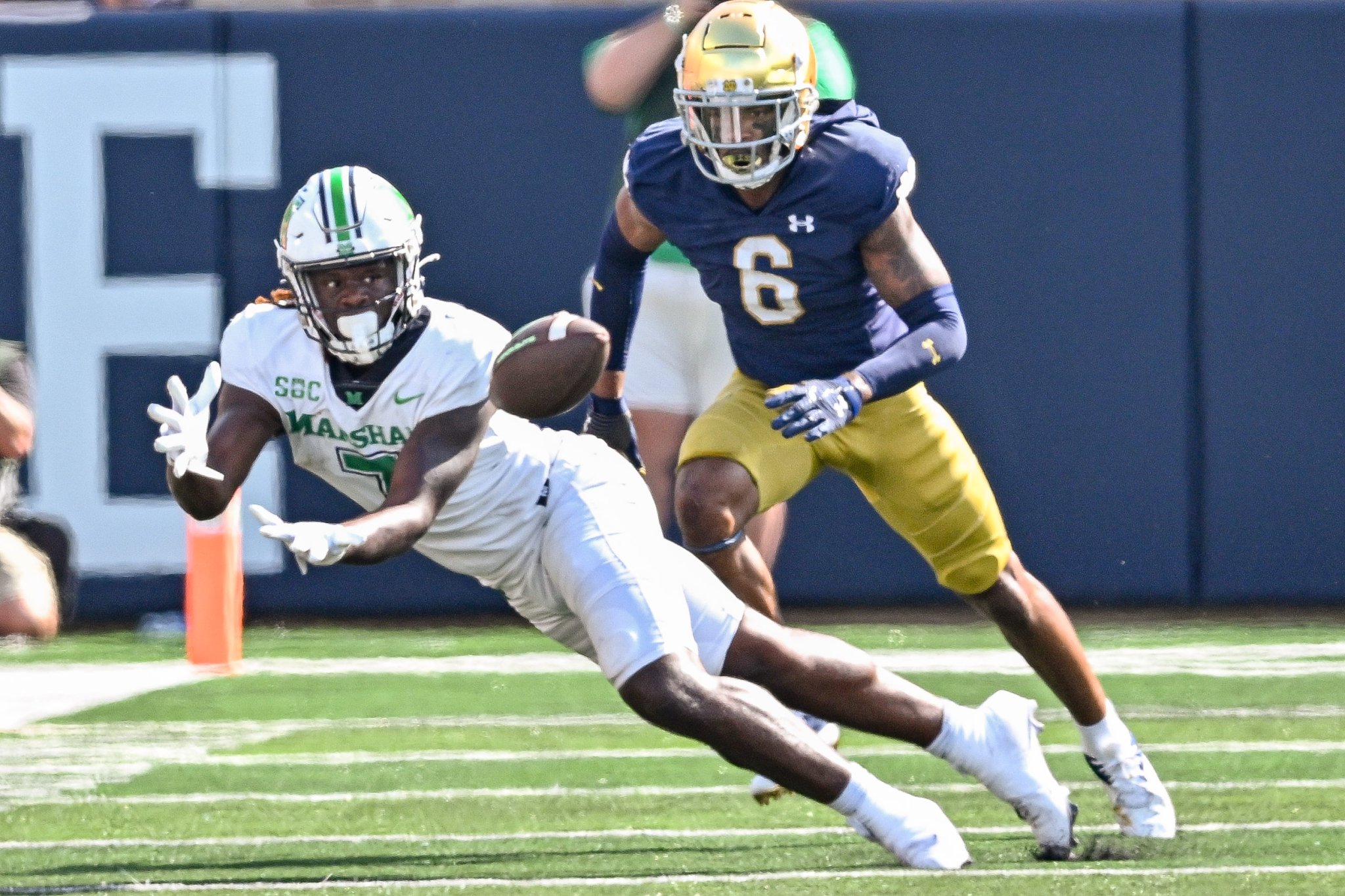 HUNTINGTON, W.Va. — Marshall’s 26-21 win over what was then a nationally-ranked Notre Dame team September 10 seems much longer than a few weeks back.

That’s because of the Thundering Herd’s recent showings in consecutive road losses to Bowling Green and Troy, the first of which came in overtime with MU heavily-favored against the Falcons, before offense was virtually non-existent last Saturday against the Trojans.

In both setbacks, a multitude of factors have cost the Herd mightily, including turnovers, missed assignments and inconsistent offensive play that led to a mere 174 total yards in a 16-7 loss at Troy.

As his team prepares for Saturday’s 3:30 home game against Gardner-Webb, Marshall head coach Charles Huff says his biggest goal this week is to reduce and eliminate plays he refers to as ‘Herd Beaters’, including turnovers, penalties, missed tackles, sacks and negative-yardage plays.

“We have to get back to playing complementary football,” Huff said. “We have to focus on the things we can control that lead to winning football.”

Against Troy, the negative plays included five sacks allowed, a blocked field goal and perhaps most importantly, a lost fumble that was returned for a touchdown. Combined with Troy’s 321 passing yards to Marshall’s 78, it was too much for Huff’s team to overcome as it lost its opener in Sun Belt play.

Huff was quick to point out that his team followed a 2-0 start with consecutive losses a year ago as the Herd fell to East Carolina and Appalachian State after beating Navy and North Carolina Central.

The coach also hinted at personnel changes for the Gardner-Webb game.

“We’re going to either change the person if we believe he can better handle a position or we’ll coach up the current starter if we feel their backup is no better,” Huff said. “On the offensive line especially, we had these same issues in August, but we worked around them.”

Still, quarterbacks Henry Colombi and Cam Fancher combined to complete only 11-of-20 passes for 78 yards against Troy, as the Herd offense was unable to develop rhythm regardless of who was behind center.

On Saturday, Marshall (2-2, 0-1) will look to turn things in the right direction when it plays its second home game and first in a month against FCS foe Gardner-Webb (1-3) from the Big South Conference.

The contest at Joan C. Edwards Stadium will be shown on ESPN+.

Marshall has won the only previous meeting against Gardner-Webb, which enters off a 45-13 loss to Mercer last Saturday. The Bulldogs opened this season with a 56-21 win over Division II Limestone, before losing consecutive games to Sun Belt member Coastal Carolina (31-27) and Elon (30-24) along with last week’s Mercer loss.

Tre Lamb is in his third year as the Bulldogs’ head coach and has a 7-24 overall record.

Because Marshall opened this season with a win over Norfolk State of the FCS, Saturday’s result does not factor into the Herd’s bowl eligibility. Marshall needs at least five wins over FBS opponents to qualify for a bowl as FBS teams can count only one win per season over an FCS opponent towards bowl eligibility.

Marshall isn’t on the road again until October 22 at James Madison. Between Saturday’s contest and the matchup with the Dukes, MU will play a home league game Wednesday, October 12 against Louisiana, which defeated the Herd in last year’s R+L Carriers New Orleans Bowl before Marshall became a Sun Belt member.