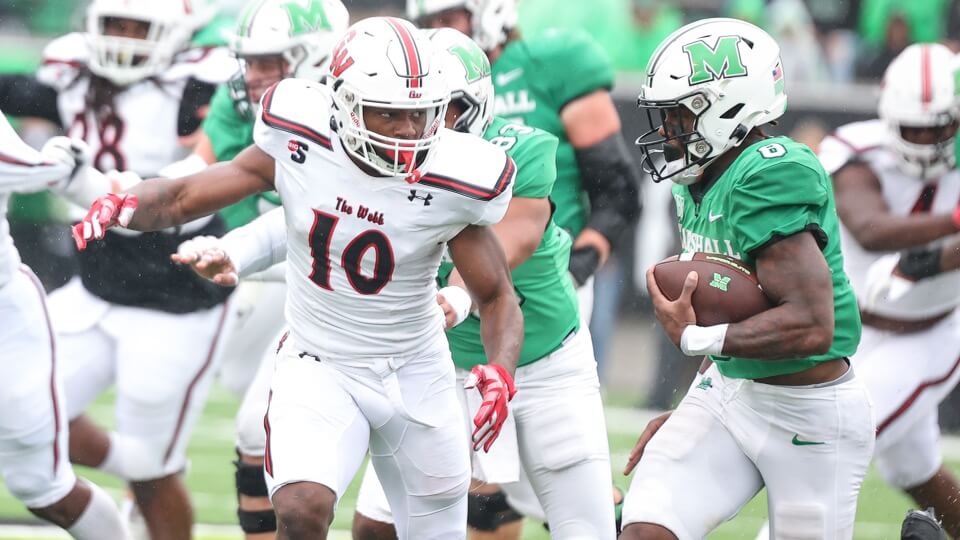 HUNTINGTON, W.Va. — When Marshall’s offense got into Gardner-Webb’s red zone, it made the most of it.

The Thundering Herd entered the red zone four times, scored three touchdowns and that stat helped pave the way to a 28-7 victory Saturday at Joan C. Edwards Field. The chill and rain cut into attendance and the crowd was announced at 19,845.

The Herd (3-2) got two first-half scoring tosses from starter Henry Colombi. He got helped to the locker room at the half and Cam Fancher took over. Fancher led Marshall to a score on its first possession in the third quarter when workhorse Khalan Laborn went over the top from 1 yard.

The transfer from Florida State chalked up his fifth straight 100-yard game. He raced 78 yards for a score in the fourth period to finally excite the fans left watching and put his game totals at 35 carries for a career-high 191 yards.

“Appreciate the way the players grinded it out,” Herd coach Charles Huff said. “The defense continues to be consistent. The offense grinded it on the ground. That’s who we are now.”

While the Herd offense found its pace to a degree, the defense again played lights out, allowing 19 rush yards and no red zone trips for the Bulldogs. Troy went 2-of-5 inside the 20 last week, settling for two field goals. The Herd defense has not allowed a touchdown the last two games.

Colombi tossed a first-quarter TD pass to Anthony Turner for 24 yards and another of 10 yards to Corey Gammage in the second.

The downer came in the first when Ty Anderson of the Bulldogs picked off a pass and went 45 yards for a score.

The weather contributed to the Herd’s limited air attack and Huff going with Fancher in the second half. Colombi, who got his left leg rolled on, could’ve gone back in.

“Limited the throws because of the conditions,” Huff said. “We have to be patient. What we have to do is grind it out. Glad to have that. May need that one day down the road. It was best to leave him (Cam) in for what we were doing. Keep Henry out.”

Huff saluted the job turned in by Laborn.

“Tried to drive to take some time off the clock,” Huff said. “The holes got bigger. Went from three to four to six to eight. If he has to carry it 60 times, he’ll carry it 60. We do what we have to do to win. We don’t count reps. It’s what we can do to win.”

The Herd secondary is proving to be up to the challenge. Steven Gilmore had two picks and Joshua Bowers one. The Herd also recovered a fumble.

“He’s been patient,” Huff said of Gilmore. “A good job by the whole defensive backfield. They’re playing the ball in the air. Lock and locate. I tell them they’re receivers running backwards.”

“I try to do what I can to help my team win,” Gilmore said. “Attack the ball and make the play in the air.”

“We’re playing well on our side of the ball,” Porter said. “Very sound defense. Everybody is where they’re supposed to be. Try to be as stingy as possible.”

Getting points in the red zone is vital to Colombi and the offense.

“You’ve got to score in the red zone to win games,” said Colombi, a Texas Tech transfer. “We haven’t done that. It’s good for the confidence. The way the defense has played, it takes the pressure off when you get stagnant.

“Wish I could have the interception back. It’s unfortunate. You just move on, Laborn’s a workhorse. You saw that.”

The two teams combined for 18 punts — 10 by Gardner-Webb and eight for Marshall. Marshall had four holding calls in the first half. Herd defensive lineman Immanuel Bush got ejected in the second quarter on a targeting call. It was confirmed after a review.

The Herd is off until Wednesday, October 12 when it takes on Louisiana in its first Sun Belt home game. Then there’s another break until October 22 when Marshall travels to James Madison.