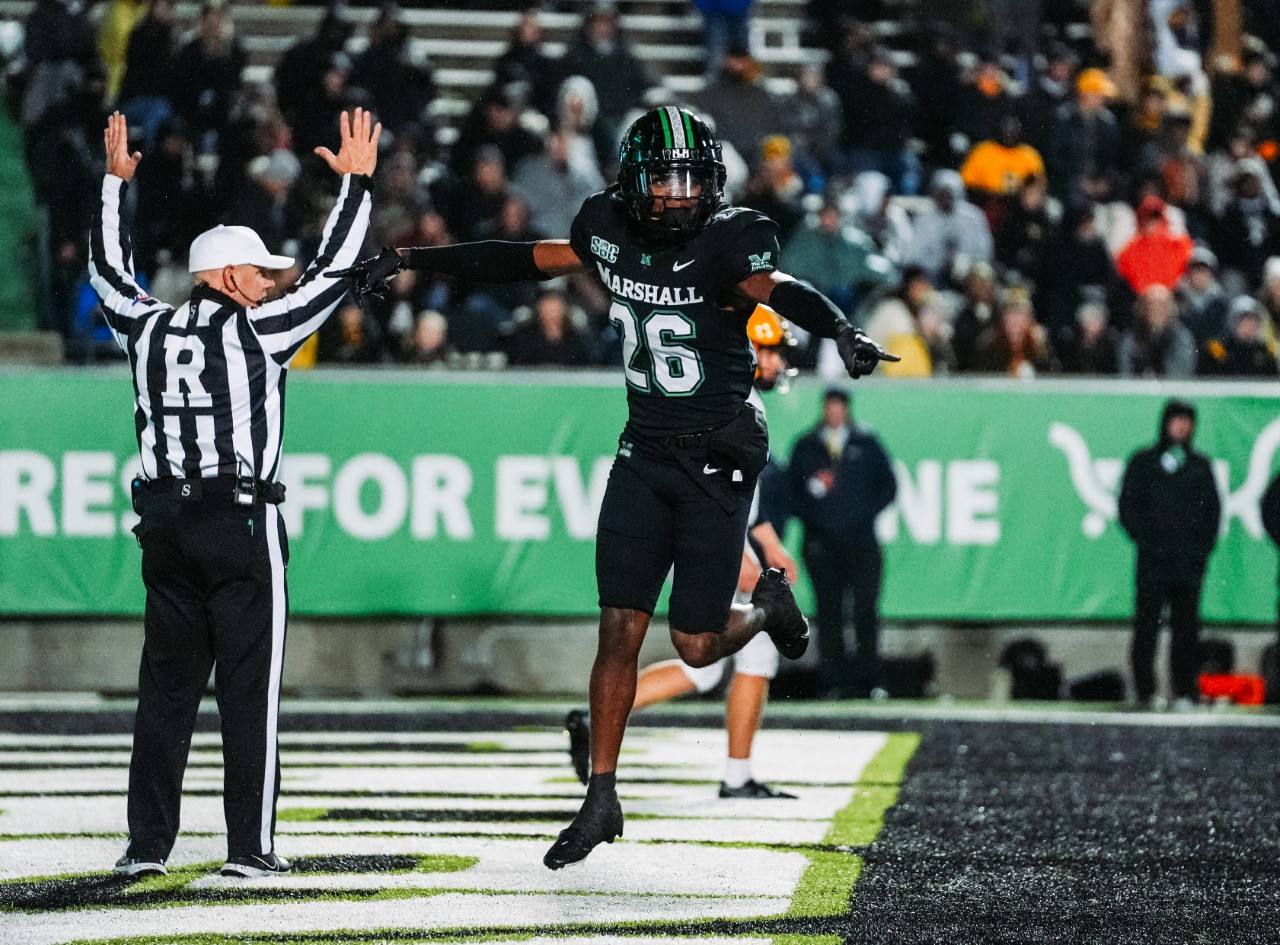 Marshall's Dainsus Miller celebrates after scoring a touchdown against Appalachian State by recovering a blocked punt. Photo courtesy of @HerdFB

HUNTINGTON, W.Va — Marshall’s defense got two stops when needed most. The offense came to life a bit with three long drives for touchdowns. And special teams got a tradeoff of sorts, scoring on a blocked punt, but allowing the opponent to return the next kickoff 94 yards for a score.

Combine that production in the three phases and the Thundering Herd escaped with a 28-21 win over Appalachian State on Saturday in front of 24,132 fans at Joan C. Edwards for the first encounter between these two teams as Sun Belt Conference members.

The victory in the Memorial Game came two days shy of the 52nd anniversary of the Nov. 14, 1970 plane crash bringing the Herd home from a game at East Carolina earlier in the day. There were 75 players, coaches, staff and community members on board the plane that crashed short of the runway at Tri-State Airport in Kenova.

The Marshall team wore all black uniforms with black helmets that included the logo of the 1970 team and names of the 75 who perished written on a white stripe down the middle of the helmet.

“This weekend brings a lot of emotion,” Herd coach Charles Huff said. “I hope the 75 in heaven can smile a lot today.”

When Huff said that at the postgame press conference, he looked at WSAZ’s Keith Morehouse, whose father Gene was SID and radio voice of the Herd at that time and died in the crash.

The two memorable stops came with just over 5 minutes left and the Mountaineers down 28-21. On a fourth-and-1 at the Herd 13, quarterback Chase Brice pulled the ball on a read-option and got stopped for a 3-yard loss by linebacker Eli Neal.

Appalachian State had one last chance, taking over at its 25 with 2:47 left. The visitors reached the Herd 45 and faced a fourth-and-6, a play that saw Brice’s attempt to Christan Horn broken up by Daytione Smith with 36 seconds on the clock.

That touched off a wild celebration among Herd players, coaches and fans.

“The defense came up with plays when needed,” Huff said. “That’s a real good football team over there. They know how to win.”

On offense, Cam Fancher made his third straight start and completed 16-of-28 passes for 225 yards and two scores. He also carried 12 times for 37 yards.

Khalan Laborn led the ground game with 53 yards on 18 carries and a TD, a 1-yard run to cap a 15-play, 80-yard drive by Marshall on its first possession. It was his 14th TD of the season.

Marshall had another 80-yard drive to take a 14-0 lead in the second when Fancher found Jayden Harrison for a 5-yard TD pass.

Appalachian State capitalized on a muffed punt by the Herd and scored on a 1-yard run by Daetrich Harrington right before the half. He is the first running back to score a TD against the Herd this season.

In the third, the Herd’s Shadeed Ahmed blocked a punt by the Mountaineers and Danisus Miller recovered it in the end zone for a score and 21-7 lead.

That’s when Milan Tucker responded with a 94-yard kickoff return for a TD.

However, Fancher came back with a 19-yard TD pass to Corey Gammage to make it 28-14.

Henry Pearson caught a 14-yard TD pass from Brice on the first play of the fourth period to cut the deficit to 28-21.

Down the stretch, Herd fans will remember the two stops by the defense ranked at or near the top in many Sun Belt defensive categories.

“We like challenges,” said Herd defensive back Micah Abraham, who had one picked taken away due to a penalty. “It’s a about discipline. We got to the quarterback and the defensive backs made the stops.”

“Our backs were to the wall,” Herd linebacker Abraham Beauplan said. “The last two stops, our guys were in position.”

Marshall and Appalachian State met for the 25th time. The Mountaineers lead the series 15-10. The two schools used to be members of the I-AA Southern Conference. Appalachian State won last year, 31-30, by scoring 10 straight points in the fourth period.

Marshall had 341 total yards to 293 for Appalachian State. Brice went 15-of-34 for 177 yards and score. Charles Montgomery led Herd receivers with 109 yards on five catches, including a 71-yarder on a tunnel screen.

Huff said Fancher continues to grow. The southpaw got injured slightly in the third period, missed a series and then returned.

“He allows us to be more versatile on offense,” Huff said. “He managed the game really well. The guys rally around him and make plays for him.”

One of the Herd coaches who perished in the crash was Al Carelli. He had just accepted the position of offensive line coach just months earlier. Vince was 3 when his father died. His mother’s name was Marti.

Carelli and wife Tamra live in Chattanooga, Tenn. He works in insurance and has one daughter, Lauren

This fountain ceremony will be a first for Carelli. The Covid-19 pandemic interrupted his play to return for the 50th anniversary.

Shawn Clark, head coach for Appalachian State and a Charleston native, paid some special respects to the Herd program. His players had a decal on the back of their helmets with the No. 75.

“Class act by Appalachian State,” Huff said. “Coach Clark told me about it before the game. He understands what it means. This is what college football is all about. He didn’t have to do it. Hats off to the App State fans. This brings a lot of emotion. Their fans travel.

“Hope the Herd brothers and sisters in heaven are proud of what we did today. How we played.”