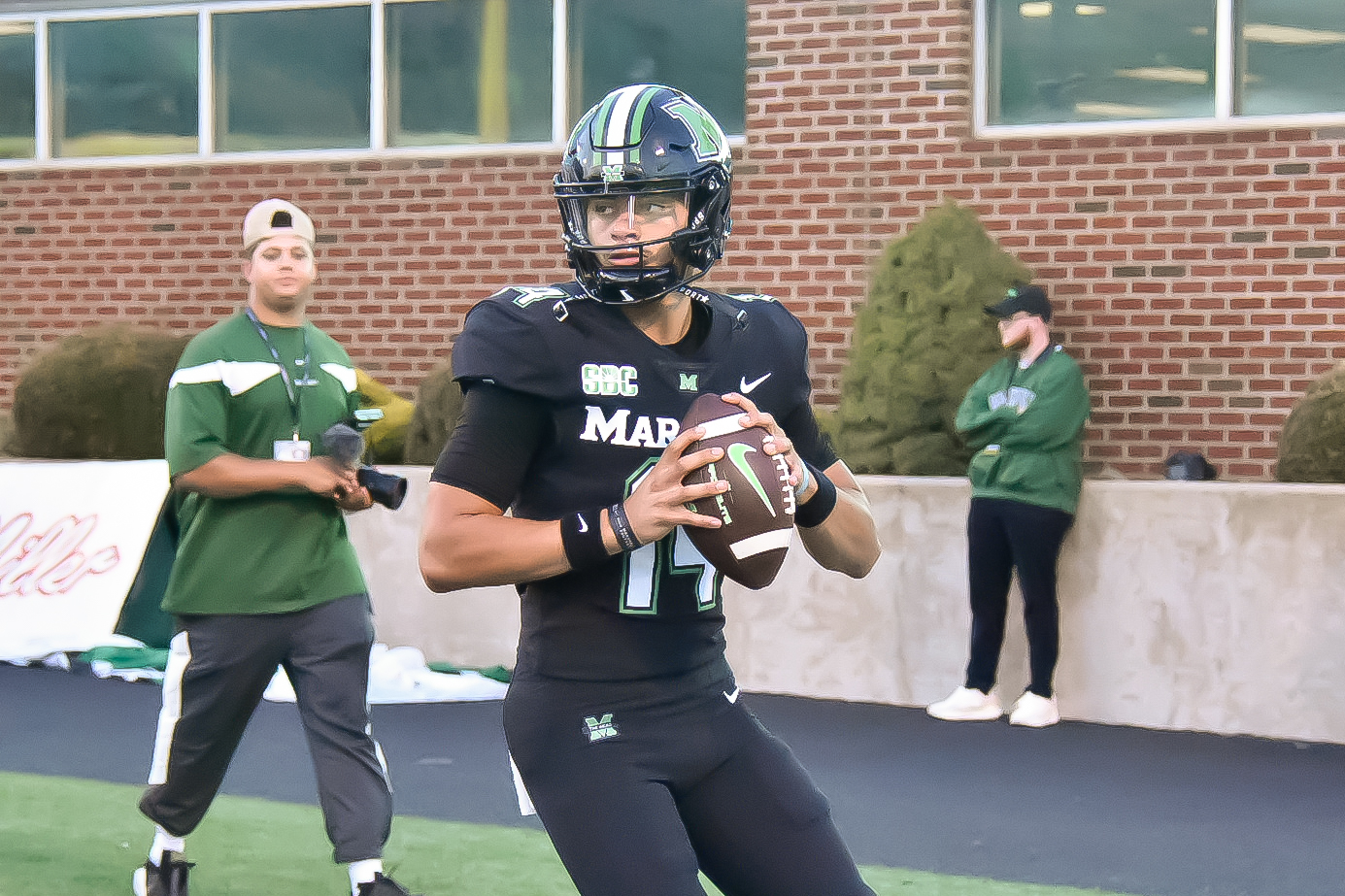 The contest at Allen Paulson Stadium kicks off at 6 p.m. and will be shown by ESPN+.

Georgia Southern (5-5, 2-4) played on Thursday last week and lost at Louisiana, 36-17. The Eagles are on a two-game losing streak, though like the Herd, they’re one win from becoming bowl eligible. Marshall needs seven victories to qualify for a bowl due to two wins over FCS programs.

While Marshall leads the all-time series with GSU 4-2, the two teams have not met since 1996.

Former Southern California head coach Clay Helton is in his first season guiding Eagles. He compiled a 46-24 at USC.

Can Herd pass defense hold up against Kyle Vantrease?

Buffalo transfer quarterback Kyle Vantrease has put up impressive numbers for Georgia Southern this season, throwing for 3,306 yards and 21 touchdowns and 13 interceptions.

Vantrease is no stranger to the veterans on the Marshall defense, having faced each other in the 2020 Camellia Bowl when he played for Buffalo Bulls.

Buffalo won that game 17-10 and Vantrease threw for 140 yards along with an interception on a chilly Christmas Day. He scored a rushing touchdown in the contest.

Marshall defenders have been especially stingy against the run in recent games, but their biggest goal in the Georgia Southern game will be to force Vantrease out of his comfort zone. That will be easier said than done as the Eagles have only given up five sacks this season — the second-fewest among FBS teams.

Marshall has been stingy defensively for much of the season and will look to live up to that billing against a quality passing attack.

There were mixed opinions on a midseason change at quarterback when the Herd offense was struggling, but redshirt freshman Cam Fancher is starting to turn doubters into believers.

Continued growth for Fancher against a Georgia Southern defense that has struggled could mean a big day is in store for the Herd offense.

Fancher is getting more comfortable throwing downfield and showed it in last week’s win over Appalachian State as he delivered scoring passes to Jayden Harrison and Corey Gammage, with Gammage’s scoring grab in the third quarter proving to be the game-winner.

Fancher ended with 225 passing yards. Along with improved passing, Fancher continues to trouble defenses with his running ability as he added 37 rushing yards, giving some relief to Marshall back Khalan Laborn and putting more pressure on opposing defenses.

What does special teams show?

Marshall head coach Charles Huff hopes to see some more impact plays on special teams against Georgia Southern. A week ago, the Herd had several that factored into the outcome.

The biggest play came just after halftime when Shadeed Ahmed blocked an Appalachian State punt, which was recovered in the end zone by Dainsus Miller. Miller is becoming a special teams star for the Herd.

He also had a fumble recovery on a kickoff against the Mountaineers and picked up two special teams tackles.

However, Huff will be looking for better coverage this week as Marshall gave up a 96-yard kickoff return for a touchdown by Appalachian State’s Milan Tucker.

NOTES: Senior defensive back Stephen Gilmore has been invited to take part in the Hula Bowl All-Star Game in Orlando, Florida, which is set for January 14, 2023. It’s the third consecutive year that a Marshall player has been invited to take part in the game. Linebacker Tavante Beckett played in it in 2020 and offensive lineman Alex Mollette was in the 2021 contest. Thus far this season, Gilmore has 29 tackles, six pass breakups, a quarterback hurry and three interceptions, including one that he returned for a touchdown in Marshall’s win at Notre Dame … The Sun Belt Conference has set a noon kickoff time for Marshall’s regular season finale on November 26 at home against Georgia State.