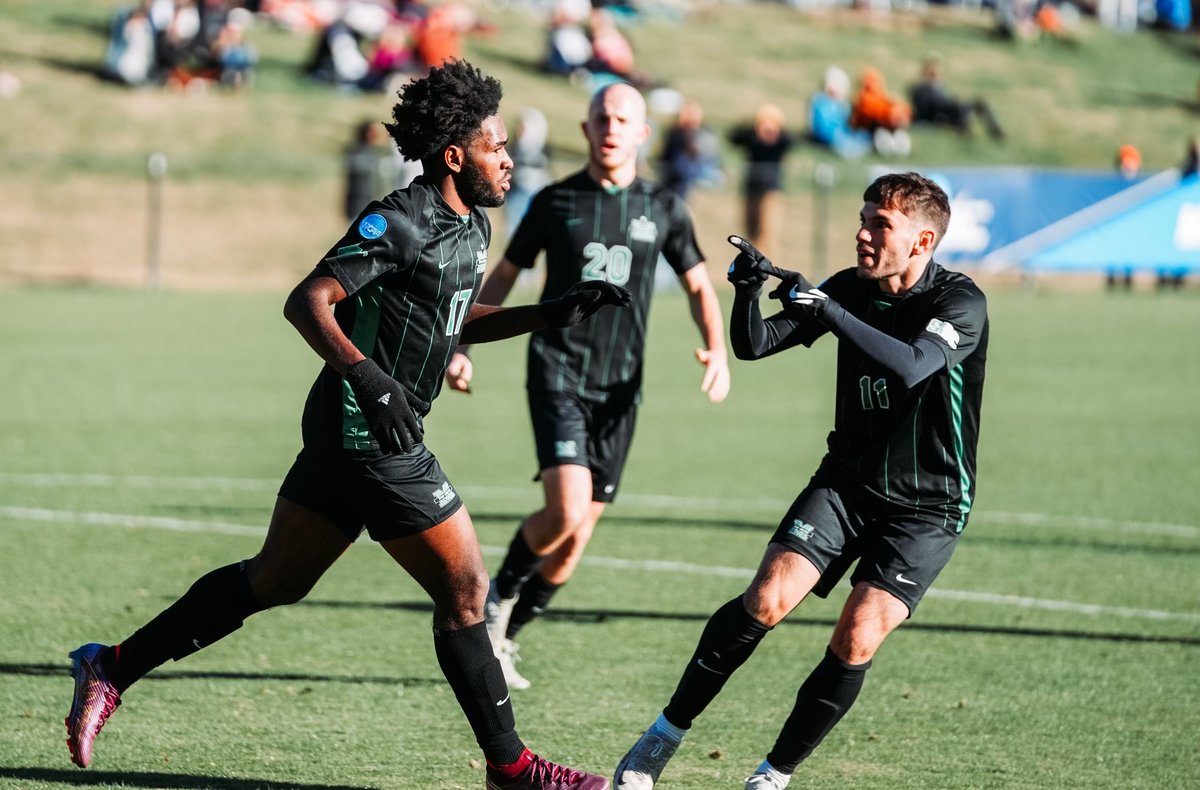 Matthew Bell and Marshall celebrate during a win over Virginia. Photo courtesy of @HerdMSoccer

No. 9 Marshall picked an ideal time to get past Virginia in men’s soccer. The effort from a player utilized briefly in a different role made a huge difference.

Freshman Matthew Bell had the first big moment Sunday for the Thundering Herd. He scored a rebound goal at 65:36 for his tenth of the season to tie the match at 1-1 at Klockner Stadium in Charlottesville, Va. From there the two teams battled the rest of the 90 minutes and two 10-minute overtimes and stayed tied to force penalty kicks.

That’s where the Herd player known best for stopping shots stepped up take the Thundering Herd’s first attempt. Oliver Semmle, one of the top goalkeepers in the Sun Belt Conference with six shutouts, beat diving Virginia keeper Olden Brown on a low shot to the left for his first goal and 1-0 lead.

Then Semmle turned around and went in goal to face Daniel Mangarov, the first player in the penalty kick shootout for the Cavaliers. Semmle extended to his left and knocked the ball away to deny Mangarov.

From there, Gabriel Alves, Bell, Joao Souza and Milo Josef scored to clinch the outcome, 5-3, and stun the No. 4 seed and 13th ranked Cavaliers. Josef’s goal secured the decision and gave the Herd a 6-0-1 all-time mark against the Cavaliers.

Philip Horton, Axel Ahlander and Andreas Uhland scored for the Cavaliers, but Semmle’s first stop made the difference.

The win sets up an interesting match for Marshall (12-3-3) in the third round. The at-large entry travels to Indiana to face the team the Herd beat in overtime for the 2020 NCAA championship. The match will be next Sunday in Bloomington, Ind. The Hoosiers, seeded No. 13, advanced with a 1-0 win Sunday at home over St. Louis.

For Virginia (10-4-5), this was the second straight setback in penalty kicks. The Cavaliers and Syracuse tied 2-2 in regulation and two overtimes in the Atlantic Coast Conference tournament semifinals. The Orange would prevail in PKs, 5-3.

On Sunday, Josef appeared to give the Herd a 1-0 lead in the 22nd minute, but his call got negated by an offsides. In the 28th minute, the Cavaliers struck when Albin Gashi sent a pass from the center circle to the penalty area where Reese Miller played a low cross to Phil Horton, who placed the ball in the low left corner.

Virginia had another quality chance just two minutes later. On a corner kick, the ball bouced to Gashi, who chested it down and struck a half-volley that Semmle knocked over the goal.

On Bell’s tying goal, Ibrahima Diop rifled a shot off the crossbar for the Herd and Bell cashed in on the rebound.

“We did a lot of things right today against a very good team,” Cavaliers coach George Gelnovatch said. “We were just lacking that second goal, and we had chances to do that. I knew when the bracket came out that Marshall is a very good team. They have a lot of pieces left from their national championship team a couple of year ago. I think that game probably could have been a quarterfinal or national semifinal match and I give a lot of credit to Marshall.”

Virginia was one of eight teams from the ACC to make the NCAA field. That’s the most of any conference. The Sun Belt had two. Besides the Herd, Kentucky is top seed and unbeaten entering the tournament.