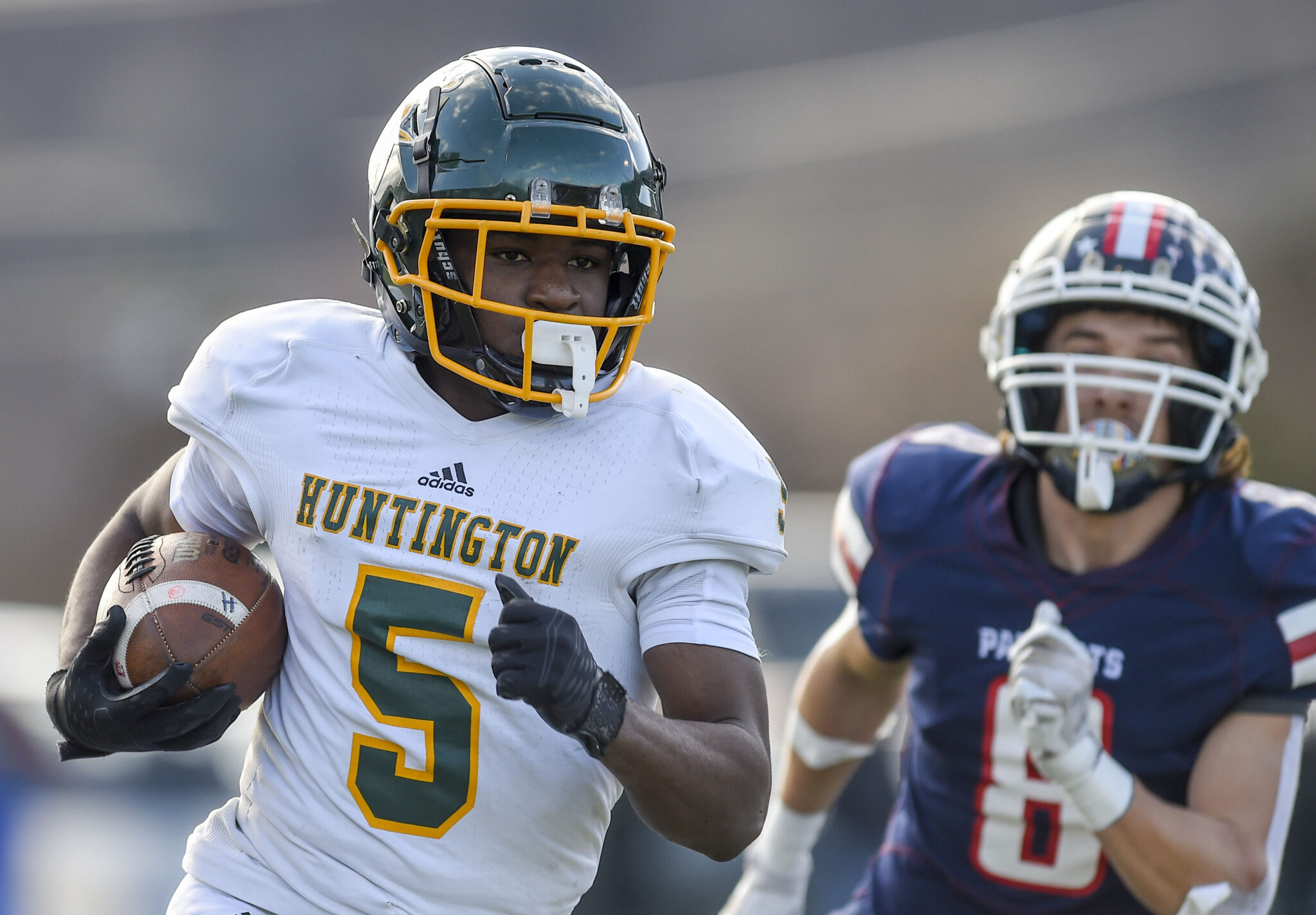 Huntington's Zah Jackson (5) runs with the ball against Parkersburg South in the AAA championship game on Saturday. Photo by William Wotring

“It would be better, though, if he won it and played for me,” Lee, head coach at South Charleston High, said with a laugh.

Jackson is the 2022 winner of the Carl Lee Award, named for the former Marshall University and NFL star. The award is presented by the West Virginia Sports Writers Association.

Lee played safety for 11 seasons with the Minnesota Vikings and one with the New Orleans Saints and was a three-time All-Pro. He was an All-Southern Conference cornerback with the Thundering Herd from 1979 through 1982.

In a 54-7 victory over South Charleston on Sept. 2, Jackson carried for 134 yards and one touchdown on just five carries. He also helped shut down the Black Eagles’ air attack, making four tackles, one for a loss, and breaking up a pass. That’s all Lee needed to see of the 5-foot-10, 170-pound sophomore cornerback.

“He deserves it,” Lee said of the honor. “I’ll give him that for sure.”

Lee compared himself with Jackson at the same age. Lee was an all-stater at South Charleston as a 5-foot-10, 164-pound cornerback.

“I look at myself and think I wasn’t remotely that good at that age,” Lee said. “He’s ahead of the game.”

In leading the Highlanders to a 13-1 record and the Class AAA state championship, Jackson made 50 tackles, five for losses, intercepted three passes, forced one fumble and made a sack. One of the faster players in the state, Jackson also starred on offense and special teams.

Huntington High coach Billy Seals said he is thrilled to have Jackson, who started as a freshman, for two more seasons.

“He’s one of the more explosive players I’ve ever coached and , man, he’s just a sophomore,” Seals said. “He continues to get better each and every day. Zah’s a great young man who has a very bright future ahead of him. We’re glad he’s a Highlander.”

Jackson was Huntington’s most valuable player in the state title game, a 28-3 victory over Parkersburg South. He helped keep out of the end zone a Patriots offense that averaged 58 points per game in the playoffs.

Lee said Jackson meets his measure of what a defensive back should be.

Jackson will be honored at the WVSWA Victory Awards Dinner May 7 at the Embassy Suites in Charleston.