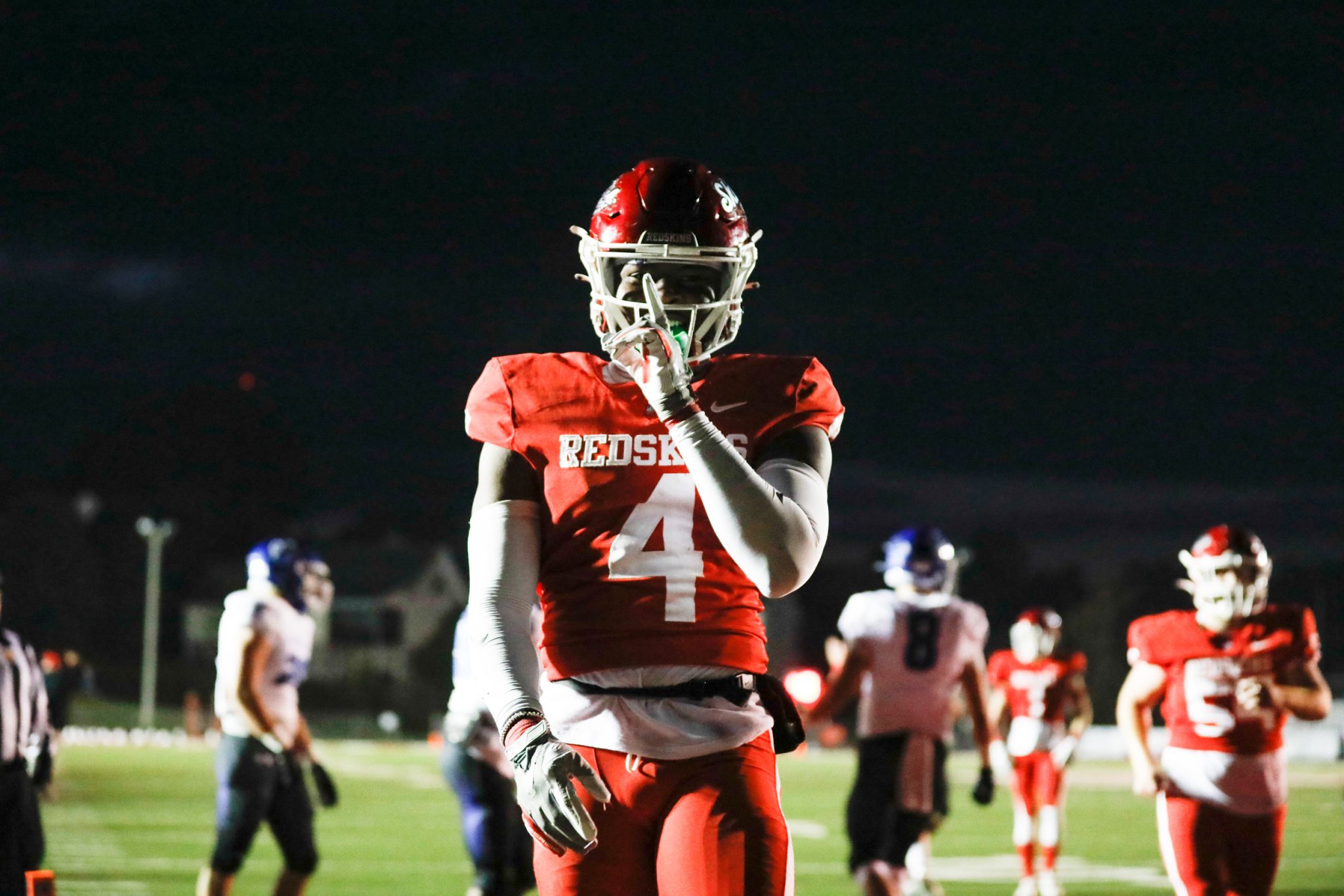 Hurricane’s Mondrell Dean (4) celebrates after running for a touchdown during a high school football game at Redskins Stadium, Friday, October 7, 2022, in Hurricane. (Photo by Marcus Constantino)

— By Tim Stephens, The Herald-Dispatch

“We couldn’t stop Dean,” Barnes said. “He was the difference.”

High school football teams in West Virginia know how Barnes feels. They couldn’t stop the Redskins star, either, from his spots at linebacker or defensive end. For his efforts, Dean is the winner of the Huff Award as the state’s premier defensive player, as determined by the West Virginia Sports Writers Association.

The honor is named for Pro Football Hall of Famer Sam Huff, who starred at Farmington High School, West Virginia University and with the New York Giants and Washington Redskins.

Dean, a 6-foot-4, 220-pound senior led Hurricane to a 10-3 record and a berth in the Class AAA state semifinals this season. His versatility caused huge problems for offensive coordinators trying to find and block him.

“It depends on where they line up Mondrell, end or linebacker,” Billy Seals, head coach of Class AAA state champion Huntington High, said of how he game plans for Hurricane’s defense. “He’s a great player.”

Highlanders all-stater Gavin Lochow, the House Award winner as the state’s top quarterback, spent much of the last four seasons trying to avoid Dean on the field.

“Mondrell’s a great player,” Lochow said. “He’s all over the place. He could play anywhere. Defensive end, linebacker, safety. You always have to know where he is. He’s that good.”

Dean made 139 tackles, 24 for losses, and 11 sacks, caused four fumbles and recovered one this season. His combination of speed, power and intelligence made Dean a challenge for even double-teaming blockers.

“He does everything,” Hurricane coach Donnie Mays said. “He makes plays from multiple positions.”

Dean, who transferred to Hurricane after three seasons at South Charleston, said he is comfortable playing wherever he’s asked. Where he plays at the next level is to be determined. Dean accumulated 13 major college offers and narrowed his choices to eight — Central Michigan, Cincinnati, Eastern Kentucky, Jacksonville State, Kent State, Marshall, Miami (Ohio) and Texas-El Paso.

Dean will be honored at the WVSWA Victory Awards Dinner May 7 at the Embassy Suites in Charleston.