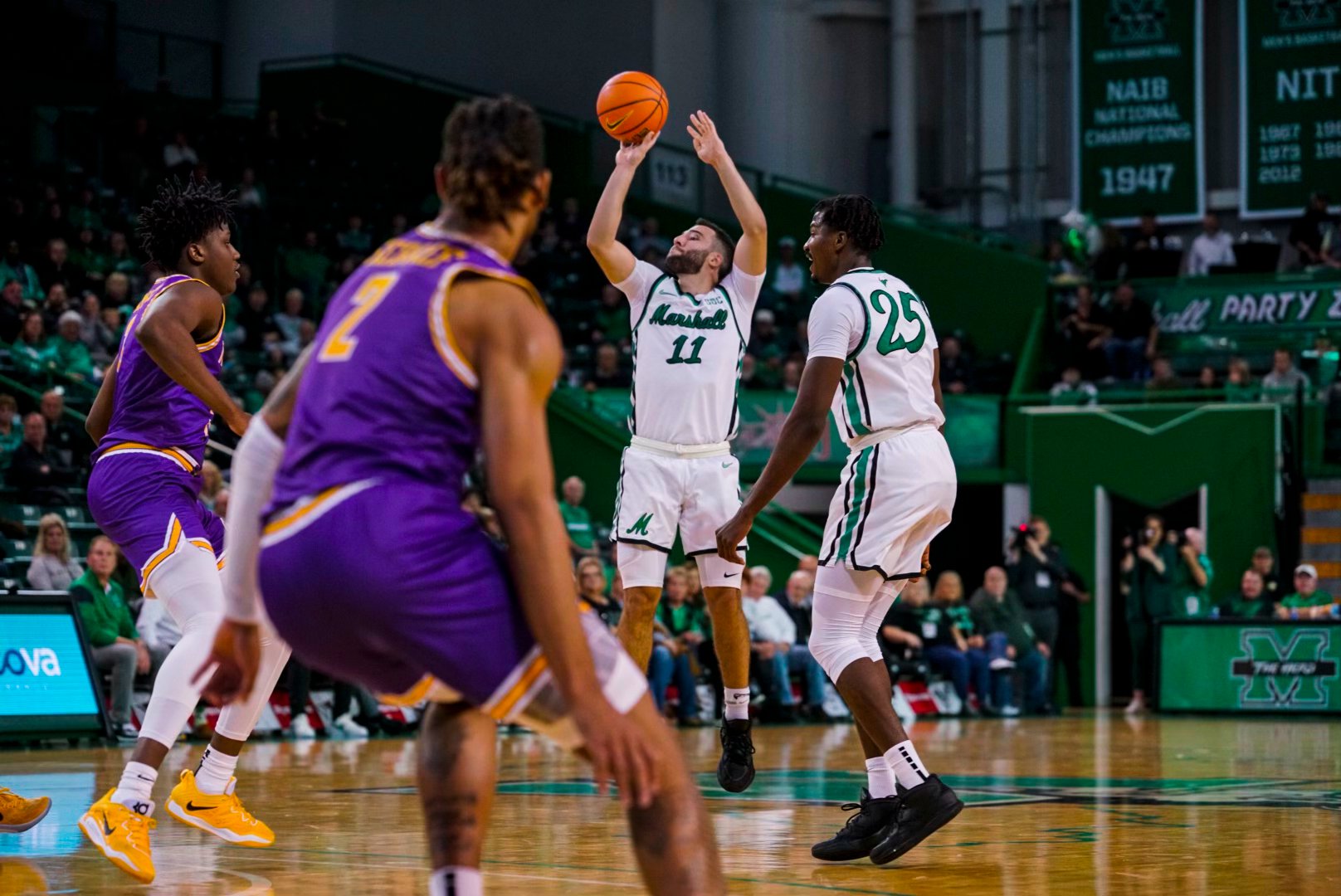 Marshall's Kam Curfman attempts a shot from the perimeter. Photo courtesy of @HerdMBB

HUNTINGTON, W.Va. — Two of the surprise teams in the Sun Belt Conference this season are Marshall and Southern Mississippi.

The Golden Eagles and Thundering Herd have combined for a 27-7 record after both struggled throughout their final season as members of Conference USA a year ago.

Set for their first meeting as members of a new league, Marshall (13-4, 2-2) plays host to Southern Miss at 9 p.m. Thursday in a nationally-televised affair on ESPN2.

Both teams are coming off strong efforts last Saturday. Marshall ended a two-game losing streak with an 81-66 home win over Coastal Carolina, which was highlighted by a 20-point, 19-rebound performance from freshman center Micah Handlogten. The Golden Eagles (14-4, 3-1) were 65-60 winners on the road at Louisiana-Monroe the same day.

Southern Miss alum Jay Ladner is in fourth season leading the Golden Eagles and has a 38-68 record. He was previously head coach at Southeastern Louisiana for five seasons. Landner has an 0-2 record against Marshall.

To turn things around this season, Southern Miss went deep into the Transfer Portal, picking up nine players, five of which brought previous Division I experience.

Those new faces enabled Southern Miss to finish the non-conference portion of its schedule with an 11-2 record, which included an early-season 60-48 victory at Vanderbilt and an 8-0 start before a two-point loss to Northwestern State. Southern Miss’ other setbacks came against UNLV and at Louisiana, the latter of which occurred one week ago.

Pinckney and Haase are the Golden Eagles’ top rebounders with averages of 7.5 and seven, respectively.

Handlogten has boosted his team-leading rebounding average to 11.2 boards per game. Marshall is tops nationally with an average of nearly 15.2 offensive rebounds per game, while the Herd is No. 2 in the nation with 43.2 boards per game.

The Thundering Herd and Golden Eagles have played 26 times in the past. Marshall leads the all-time series, 17-9.

Marshall’s home game against Old Dominion at 7 p.m. Saturday has been announced a sellout … Kinsey is one assist away from 100 for the season … Marshall head coach Dan D’Antoni is hopeful freshman forward Wyatt Fricks will be back in the Herd lineup versus Southern Miss. Fricks suffered an elbow fracture December 29 during a win over Appalachian State while attempting to dunk over a Mountaineer defender.