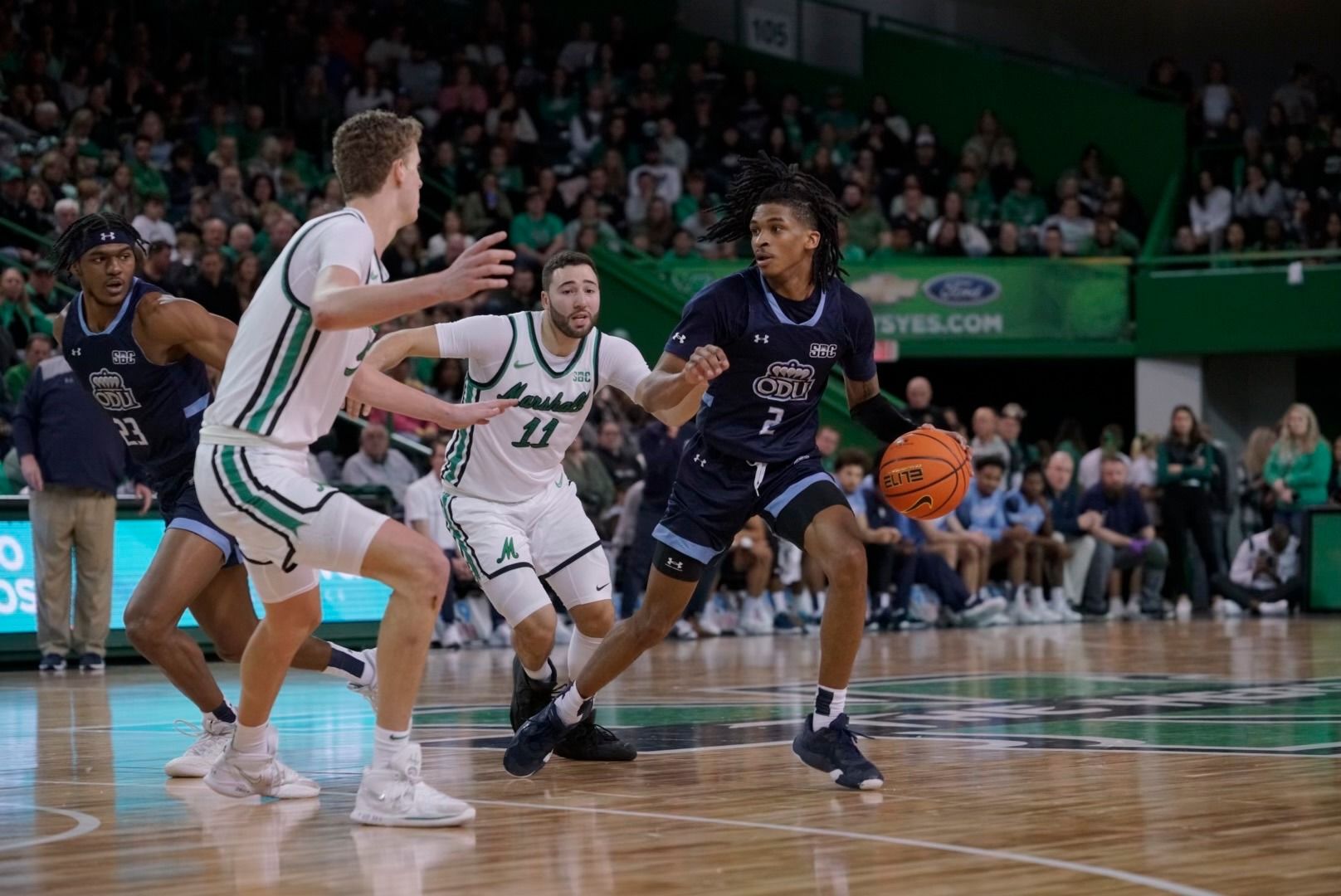 HUNTINGTON, W.Va. — Taevion Kinsey got the points needed to become the No. 3 scorer in Marshall basketball history.

Kamdyn Curfman did what was expected of him when he transferred from VMI join the Herd: Make 3-pointers.

And the defense clamped down better on Old Dominion in the second half and used two runs to subdue the Monarchs, 73-65, Saturday night in front of a sellout crowd of 5,719 at Cam Henderson Center.

“It’s an honor,” Kinsey said of passing Taft. “I give all praise to God. Everybody around me was excellent. KC (Curfman) started hot. AT (Andy Taylor) an all-round good effort. And first a shoutout to the students. The fans have always been loyal. Our record wouldn’t be this good without them. 5,719 … that’s amazing. I love it.”

Marshall (15-4, 4-2 Sun Belt) completed this homestand 3-0. And with results from elsewhere around the league Saturday, the Herd is in a six-way tie for first. It shares the top spot with Southern Miss, Louisiana, Troy, Georgia Southern and ULM.

Curfman started the game with a three and got the Herd’s last basket with a shot behind the arc. He finished with 18 points.

“I don’t think about it,” Curfman said. “I always feel good. Shots are either short or long. Get the shot, I’ll take it.”

Old Dominion led 37-34 at the half. Ben Stanley got the first basket of the second half to put the Monarchs up five at 39-34. Marshall then scored 11 straight points to take the lead for good at 45-39 with 14:34 left. Kinsey had two baskets and two free throws in the surge, Kurfman a three and Micah Handlogten two on a dunk with an assist to Kinsey. And the home team had answers when Old Dominion went zone.

“Length and size, we got to the middle, find our groove with the ball,” Kinsey said. “We waste time against the zone. But when you’ve got shooters like this, it’s hard to play us zone.”

Tyreek Scott-Grayson made two free throws with 6:44 on the clock to get the visitors back to within two at 56-54. Then Kinsey hits a two, Obinna Anochili-Killen hits a jumper and then slams home a dunk (assist to Kinsey off a turnover) and Kinsey ends the 8-0 burst with a dunk for a 10-point cushion at 64-54.

Chaunce Jenkins led Old Dominion with 23 points. Mekhi Long had 12 and Grayson 10 before fouling out.

Herd coach Dan D’Antoni had high praise for Kinsey, a guard from Columbus.

“The best way to give a compliment as a coach is to say I’m going to miss him when he’s gone,” D’Antoni said. “He showed a lot of loyalty.”

Kinsey opted to return this season instead of go into the NBA Draft.

As for Kurfman, what he did is no surprise.

“He’s here because he can do that,” D’Antoni said of Curfman’s range. “To do what he does, I expect that.”

The Herd and Old Dominion know each other well from their years in Conference USA. Marshall leads the all-time series, 14-13.

D’Antoni said the Monarchs had size and played physical.

Then came the second-half adjustments including ones to rarely seen zone defenses.

“The start when it was our turn to play defense we had to take the ball out net,” D’Antoni said. “You can’t get into transition that way. They gave us a lot of looks. You beat a zone with good players. We trapped and then it was turn and go. Basketball is a game of runs. Ours was a little bit better at the right time.”

Marshall finished 8-of-16 from the foul line. The Herd entered the game No. 14 in the league in free-throw shooting and the Monarch 13th.

“That’s a concern for some players,” D’Antoni said. “It’s mental mostly. Be comfortable at the line.”

Old Dominion and Marshall are the top two teams in the league in attendance. The Monarchs lead with a 5,194 average per game and Marshall follows at 57,086, a 4,390 average.

During a timeout with 7:39 left in the first half, Marshall’s football team went to halfcourt and received recognition for winning the 2022 Myrtle Beach Bowl. Prior the to the game, the players signed autographs and posed for pictures with the bowl trophy.