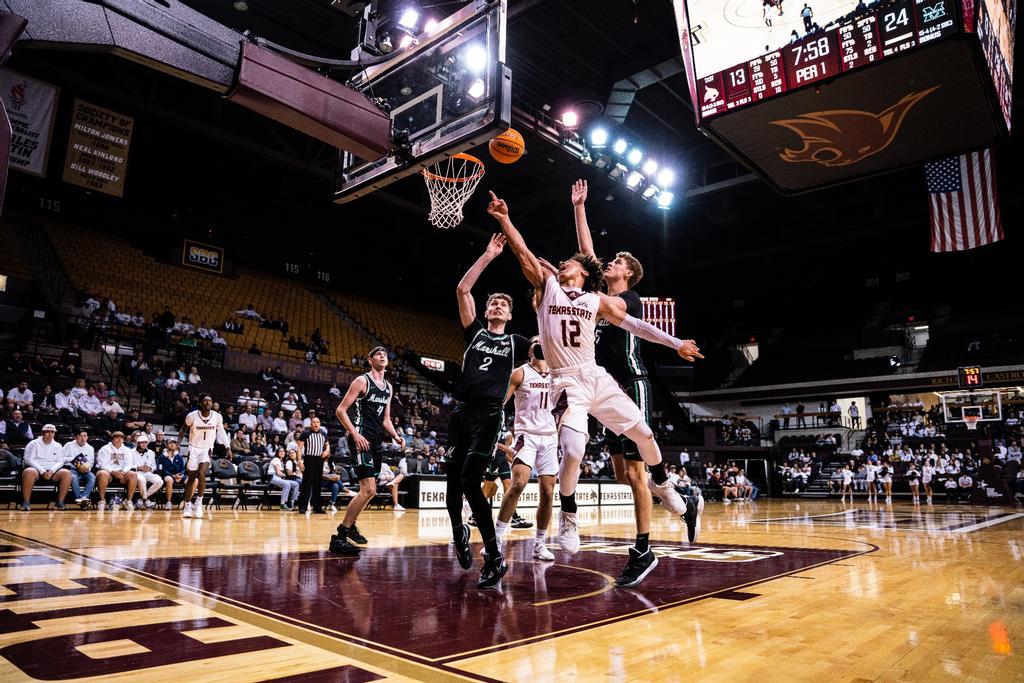 The Thundering Herd ended up outscoring the Bobcats, 13-5, from that point and ruined a White Out Night for 3,183 fans in Strahan Arena.

“They’re two-time defending champs,” Herd coach Dan D’Antoni said of the Bobcats. “They played like it. They shot extremely well. The crowd [is] usually about 1,000. They brought it this game. We closed extremely well.”

This was the first game ever between the two schools.

Kamdym Curfman, the Herd’s designated perimeter specialist since his transfer from VMI, lit it up in the first half. He took six threes and made them all for 18 points. Meanwhile, leading scorer Taevion Kinsey got two early fouls and watched from the bench as Curfman and his teammates go up by 11 in the first half twice only to see the home team rally to tie at 33-33 by halftime.

Kinsey, top scorer in the conference, came back strong in the second half and scored twice in the late run to finish with 19 points. He got the last rebound of the game for No. 700 of his career. Curfman finished with 21 and Taylor scored 20.

“That display of basketball I watched (first half), I didn’t even look for a shot,” Kinsey said. “When Kam’s hot like that you got to get the ball to him. Two fouls early is really tough, it affects you mentally. I worry about us, what we do. With the team we have, I keep going with the praise. The second half, they trusted in me. They have a great team. It was a battle. It was our toughness, grit and how we respond.”

Curman came in with 61 treys, No. 1 in the conference.

“Even the one I banked in (three) you go, ‘Wow.’ Once I hit five in a row the rim looks ginormous, like the ocean,” Curfman said. “The second half they changed things up and that opened everyone else up.”

D’Antoni pointed out it was all the Herd’s pieces binding into one.

“We saw tonight what he did at VMI,” D’Antoni said of Curfman. Kam, TK (Kinsey), Andy (Taylor), Micah (Handlogten) each carry a little different game. They’re a perfect fit for each other. As long as we play like that, we’re a difficult team to take out.”

Kinsey and D’Antoni took great pride in the free-throw statistic since the Herd entered the night ranked 14th and last in the league in foul shooting.

“I took over tonight,” D’Antoni said.

Texas State entered the game ranked No. 4 in defense in the Sun Belt, allowing 64.3 points a game. The Herd’s total is the most scored against the Bobcats in league play.

“Good to get a win against a team that grinds like that,” D’Antoni said. “We share the ball, find the guy who’s hot. Taevion had the early fouls, but at the end the game’s in his hands. That’s what he does.”

The Herd is back in action Saturday against Arkansas State in Jonesboro, Ark. Tip is 3 p.m.

Earlier in the week, Kinsey was named to 2023 Oscar Robertson Trophy Midseason Watch List. USBWA. The USBWA has named a Player of the Year since 1958-59. The award is named in honor of Robertson, Cincinnati Hall of Famer, two-time USBWA Player of Year. It is nation’s oldest award and only one named after a former player.