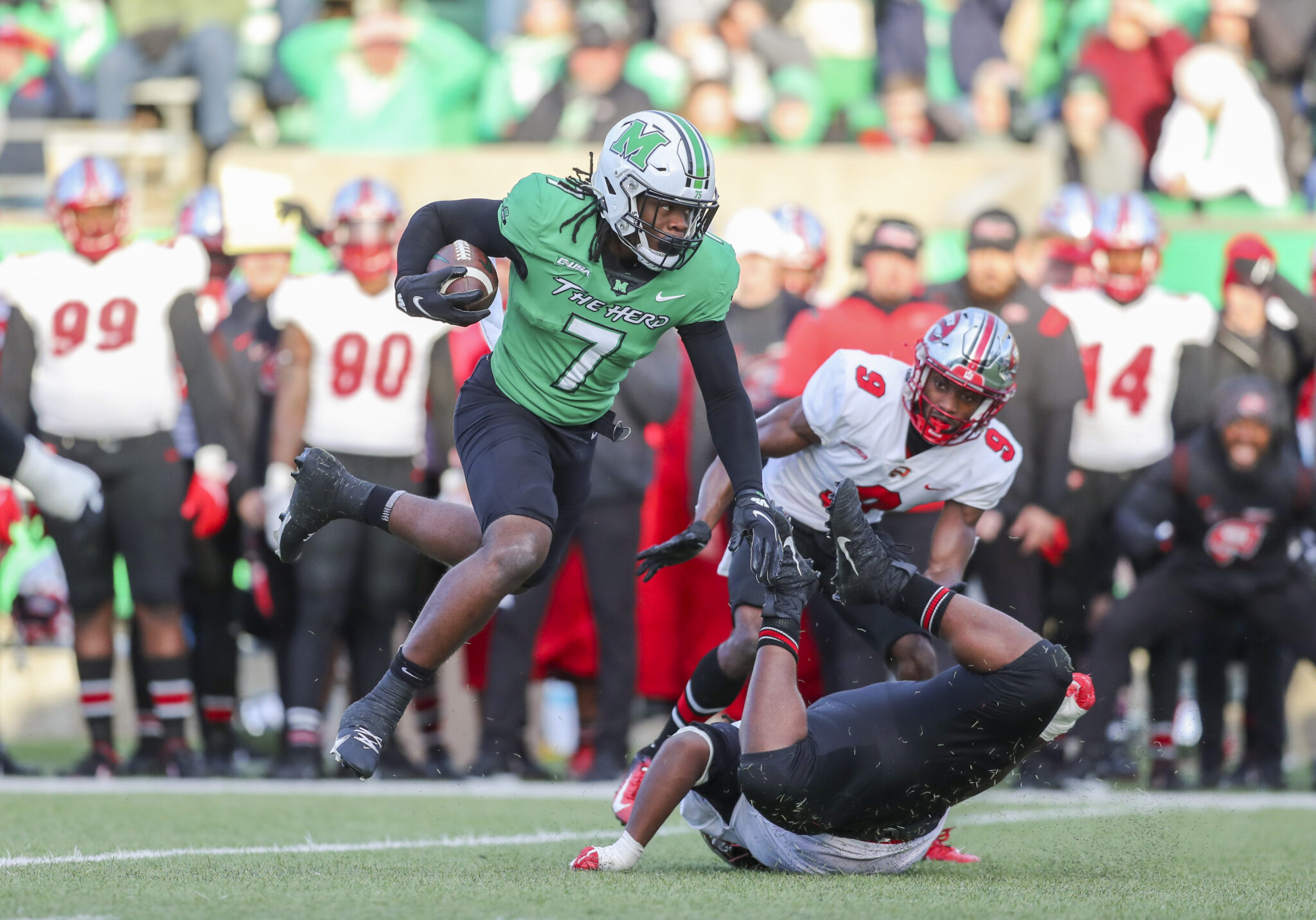 HUNTINGTON, W.Va. — The first transfer portal window for 2023 has closed, and it brought mixed news for the Marshall Football program.

Final numbers show the Herd took a hit at the receiver position and on the defensive line, but did add help in the secondary.

“The transfer portal is a whole new world for us coaches,” Herd head coach Charles Huff recently said. “We are watching who becomes available daily while trying to keep as many of our guys as possible.”

Offensively, the biggest loss for Marshall is wide receiver Corey Gammage, who will play next season at Memphis for former Herd offensive coordinator Tim Cramsey. A three-year starter, Gammage was the Herd’s leading receiver last fall with 52 catches for 774 yards and six touchdowns. Gammage averaged 14.9 yards per catch.

Another receiver to leave the program is  Shadeed Ahmed, who is headed to Sun Belt Conference member Texas State along with another Herd teammate, linebacker Dan Foster. Ahmed had 16 catches for 150 yards and a touchdown in 2022.

In limited playing time over nine games last fall, Foster had seven tackles and a half-tackle for loss, along with quarterback hurry.

Marshall lost two potential future standouts on the defensive line as Emmanuel Balogun moved on to Charlotte. Fellow lineman Immanuel Bush still hasn’t decided where he will play this fall. Balogun played in eight games for the Herd in 2022, picking up 11 tackles, a half-sack and a quarterback hurry. Bush played in all but one game last fall and had 17 tackles, three tackles for loss and 1.5 sacks.

Others to move on include backup quarterback Peter Zamora, who played in one game in 2022 and is transferring to Tusculum; safety Jaydyn Johnson, who is now at Lindenwood; offensive tackle Jack Murphy, who is now at Appalachian State; and linebacker James Smyre, who settled on UAB.

In terms of additions, Marshall’s defensive depth was boosted by the decision of former Cabell Midland High School all-state honoree J.J. Roberts to leave behind Wake Forest and return home to play cornerback for the Herd. Roberts played in 10 games last fall and recorded 20 tackles and seven pass breakups.

Another defensive addition is former Appalachian State linebacker KeSean Brown, who had 39 tackles for the Mountaineers last season, including 5.5 tackles for loss and three sacks. Brown also forced two fumbles.

Marshall’s receiving corps got a boost with the arrival of Kentucky transfer DeMarcus Harris, who had four catches for the Wildcats or 90 yards in 2022. Another new MU receiver is McNeese State transfer Mason Pierce, who was the Cowboys’ top pass-catcher in 2022 with 40 receptions for 512 yards and two touchdowns. Pierce also contributed as both a punt and kick returner for the Cowboys.

The portal reopens upon the conclusion of spring practice from May 1-15.

Marshall Sports
D'Antoni feels a major difference at Marshall as Herd hoops enjoys resurgence
Dan D'Antoni felt a lot was working against Marshall as it struggled last season, but the Herd is enjoying a turnaround led by veterans Taevion Kinsey and Andrew Taylor and newcomer Micah Handlogten.
By Greg Carey
Marshall Sports
Marshall prevails in overtime against Arkansas State, 87-78
The Herd overcame a disastrous ending to regulation to post another road win.
By MetroNews
Marshall Sports
Surging Herd looks to stay hot at Arkansas State
Marshall handled business at Texas State to start its two-game road trip. Now it looks to do the same against the Red Wolves.
By MetroNews
Marshall Sports
Marshall handles business, tops Texas State, 81-73
Kamdyn Curfman, Andrew Taylor and Taevion Kinsey combined for 60 points to lead the Herd to a road victory in Sun Belt play.
By MetroNews