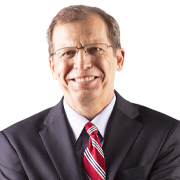 The radio “dean” of West Virginia broadcasters, Hoppy Kercheval joined West Virginia Radio Corporation in 1976. Through the years Hoppy’s assignments have spanned the gamut to include news, sports, and talk.

A native of Summit Point in Jefferson County, Hoppy began as a news anchor/reporter at WAJR in Morgantown while still attending West Virginia University. After graduating with honors from WVU, Kercheval took over as news director at WAJR and began carving an identity as one of the leading broadcasters in West Virginia.

A founding father of Metronews, Kercheval served as News Director until assuming the role of Vice President of Operations in 1991. In 1993, he created Metronews Talkline, which has become a signature program of the network. Hoppy’s gift of interviewing has made Talkline a must-listen for lawmakers and anyone interested in state politics and the day’s top news events.

Kercheval has a Master of Science in Journalism degree from WVU. He also has an honorary Doctorate of Humane Letters from West Virginia Wesleyan. Kercheval has received a number of honors over the years, including the Mel Burka Award, which is given annually by the West Virginia Broadcasters Association to the state’s top broadcaster.

An avid traveler, Hoppy’s adventures have taken him to 19 different countries around the world. He and his wife, Karin, live in Morgantown. Kercheval has one son, Ben, who lives in Denton, Texas where writes for the sports website bleacherreport.com.

Who Fired Larry Harrison and Why?

The announcement last Thursday from the WVU Athletic Department that it was “parting ways” with long-time basketball associate head coach Larry Harrison was a shocker. Harrison and head coach Bob Huggins had been together since the Cincinnati days, 24 seasons in all. Harrison had become integral to the Huggins’ staff. He made key decisions

Governor Jim Justice made a not-so-subtle reference to his political future during his state-of-the-state address Wednesday night, as he contemplates his last two years in office. (He is prohibited by law from running for a third consecutive term.) In front of a joint meeting of the Legislature, and broadcast on TV and radio to a

West Virginia is flush with cash. Follow me on these numbers. State government ended the 2022 fiscal year with a surplus of $526 million dollars.    So far in fiscal year 2023 the state has collected $850 million more in taxes than estimates. That number is projected to reach $1.7 billion by the June 30th end

The Super-Duper Majorities in the WV Legislature

The 2023 regular session of the West Virginia Legislature begins today with the Republicans in absolute control of the agenda. The 2022 election and party switches have given the GOP all but three of the 34 seats in the Senate. In the House of Delegates, Republicans hold 88 of the 100 seats. Those aren’t just

Why We Can't Fix the Border

President Biden finally visited the U.S.-Mexico border to see for himself the extent of the problem. Reports suggest his tour was somewhat sanitized. The union representing the Border Patrol tweeted just before the visit that “El Paso is being cleared up as if nothing unusual ever happened there.” That means the people in charge of

And So It Begins

The regular 60-day session of the Legislature begins Wednesday and I’m looking forward to it.  That is because I am a fan. There, I said it, and that is probably not a popular sentiment. Politicians and the political process are easy targets for ridicule. Some of that derision is well deserved.  As Mark Twain said,

The start of the 2023 legislative session is just five days away, and issues surrounding the state’s health insurance program have now been pushed to the forefront by a stunning announcement. Wheeling Hospital, which is part of the WVU Medicine Health System, said Thursday that, as of July 1st, it will not longer accept PEIA patients.