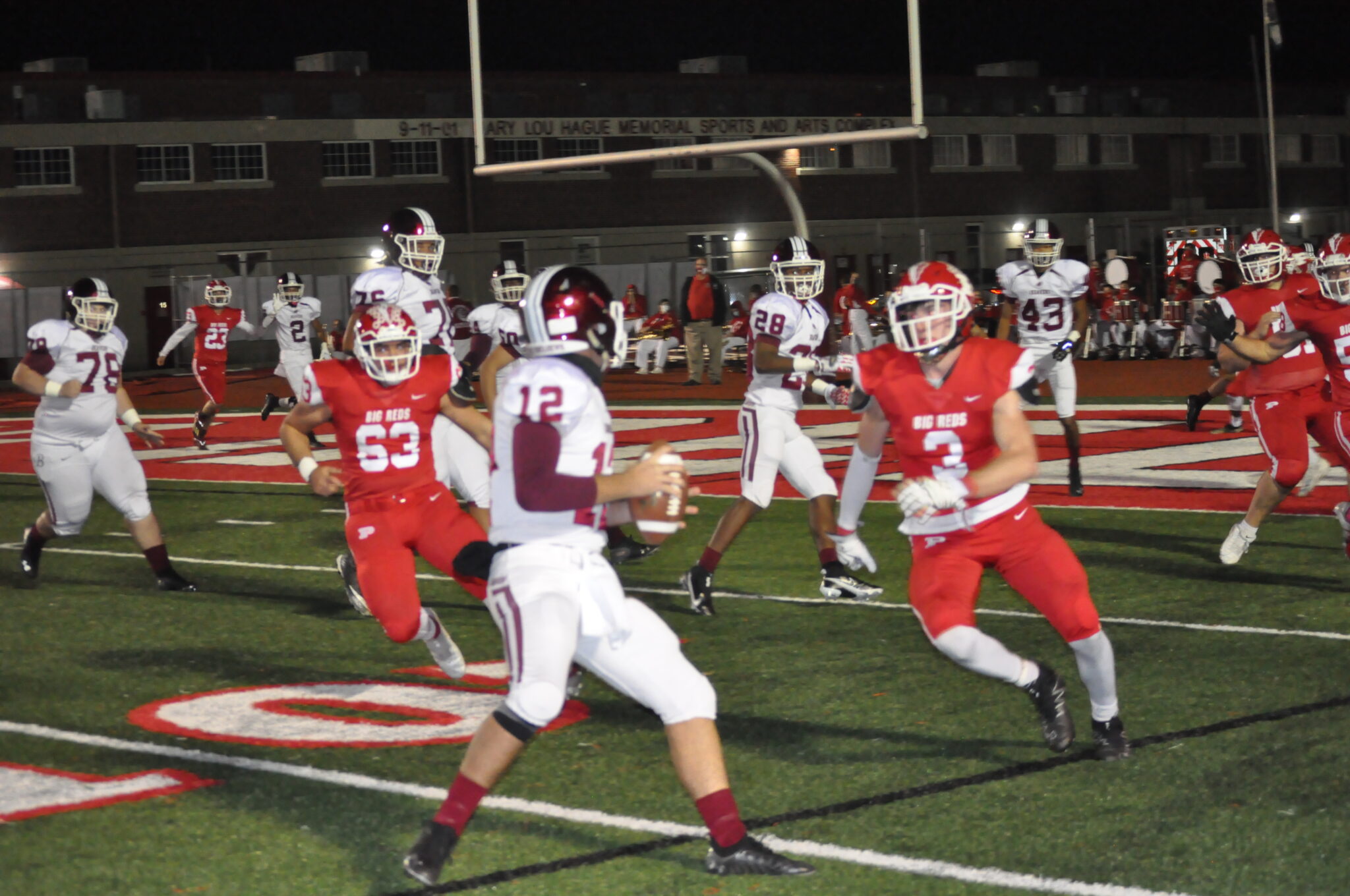 PARKERSBURG, W.Va. — Having seen his team surrender 60 points in a loss at Hurricane its last time out, Parkersburg head coach Mike Byus wanted nothing more than an improved defense effort Friday when the Big Reds welcomed Bluefield to Stadium Field.

Byus got the answer he was seeking and then some, as the Big Reds prevented Class AA No. 1 Bluefield from scoring on 10 of its 11 possessions to run away from the Beavers, 29-8.

Although it was the Beavers (4-1) who came up with the first notable play when Jaeon Flack intercepted Bryson Singer just 2:46 into the action, PHS (4-2) soon forced a punt to regain possession.

The Big Reds then put together a 13 play, 80-yard drive capped off by Singer’s 28-yard touchdown pass to Carter King on fourth-and-5. Casey Stanley knocked home the first of his three point-after kicks to give the Big Reds a 7-0 lead with 2:08 to play in the opening quarter.

The Beavers, however, answered in 18 seconds when freshman tailback Amir Hairston broke free for a 65-yard touchdown run. Carson Deeb’s two-point pass was deflected by multiple players before being hauled in by Bryce Gamble to give the Beavers their first and only lead.

Before the opening quarter ended, however, Singer found Martin Jordan for a 39-yard gain, which helped set up a second TD pass to King from 15 yards. Jordan brought in the two-point pass which left Parkersburg with a 15-8 lead.

“Our passing game clicked a little better than it’s been clicking,” Byus said. “We were able to hit some balls and make some plays in the passing game, which also helps open up your run game a little bit.”

The Beavers recovered a Singer fumble at the PHS 18-yard line with 8:42 to play in the first half, but Deeb was stopped inches short on a fourth-and-1 run from the PHS 9.

Both defenses continued to shine for the remainder of the half and Parkersburg settled for the seven-point advantage at the intermission.

“For the most part, we did a good job tackling in the open field and shortening the width of the field by containing the play and keeping them inside,” Byus said.

Flack recovered a Singer fumble at the Big Reds’ 41 less than 4 minutes into the third quarter, but the Beavers stalled out in the red zone and turned it over on downs despite a near touchdown pass on fourth-and-goal from the 20.

“Our quarterback never got in sync,” Bluefield coach Fred Simon said. “We’d make a play then have a penalty.”

Parkersburg then marched 80 yards in 12 plays, with Singer tossing a 7-yard TD pass to Aaron Kupfner to up the lead to 22-8 with 11:10 remaining.

A holding penalty, negative play on a lateral behind the line of scrimmage and sack from the Big Reds’ Justin Waybright put Bluefield in a fourth-and-43 situation on its ensuing series. The Big Reds capitalized on their next possession, which began at the BHS 47 and ended with Singer’s 4-yard TD run at the 5:23 mark.

Parkersburg had four sacks and forced a loss of yardage on 12 of the Beavers’ offensive snaps.