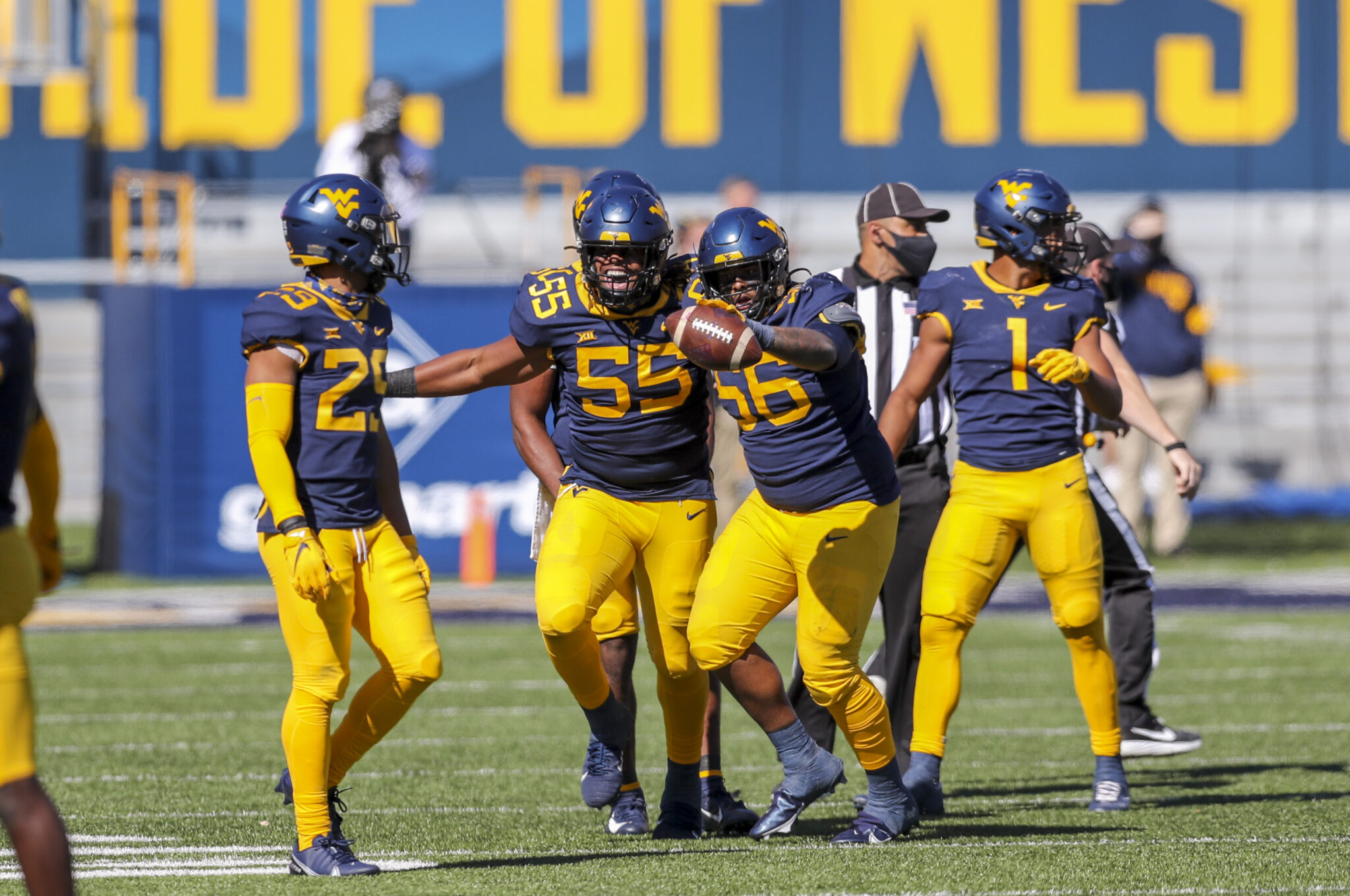 West Virginia defeated Kansas for the seventh consecutive season. An announced crowd of 10,759 was in attendance for the first home game open to the general public this season.

“I apologize we didn’t give them much to cheer about early,” said WVU head coach Neal Brown. “But we did take care of business.”

The Jayhawks later started a second drive in West Virginia territory and needed just two plays to go 45 yards. Andrew Parchment reeled in a tipped pass on a 43-yard touchdown connection from Miles Kendrick. KU’s 10-0 lead was the largest for the Jayhawks at any point this season.

West Virginia responded on their next possession with a 33-yard scoring strike from Jarret Doege to Bryce Ford-Wheaton. The Mountaineers trailed 10-7 at the end of the first quarter.

“You could go either way based off your confidence,” said Ford-Wheaton. “You could get down on yourself if you are having drops. We stopped the train right then and just went the other way.”

Leddie Brown began to roll on a 10-play, 91-yard scoring drive. He capped the drive reeling in a 6-yard pass from Doege, giving WVU their first lead at 14-10. Brown rushed 13 times for 88 yards in the first half.

Fairmont Senior grad Darius Stills delivered the highlight reel play of the day, laying out for an interception off a deflected pass at the Kansas 30-yard line late in the second quarter.

🚨 BIG MAN INTERCEPTION 🚨@DariusStills56 LAYS out for the interception!

“That’s an effort play,” said Neal Brown. “The only reason that play happens is because he is chasing the ball. If he is sitting there, pass and just stops, if he is not chasing the ball, he never gets the interception.”

“That’s a play that 99 percent of the people in the country are not going to make, especially at the D-line position.” said WVU linebacker Josh Chandler-Semedo.

The Mountaineers would get the ball back late in the half and they capitalized going 53 yards on 8 plays in 53 seconds. Evan Staley booted a 33-yard field goal, giving West Virginia a 17-10 edge at halftime.

Brown surpassed the hundred-yard rushing mark for the third time this season. He toted the ball 18 times for 195 yards and also reeled in 5 passes for 36 yards.

West Virginia’s offense slowly put the game out of reach in the third and fourth quarters with a pair of scoring drives. Brown burst through the line on 3rd-and-1 and rushed 87 yards to the end zone, giving WVU a 24-10 lead. It was the longest touchdown run for the Mountaineers since Noel Devine scored from 88 yards out against Pittsburgh in 2009.

“I saw a little crease,” said Leddie Brown. “I jumped through it and it just saw green, a bunch of green field. I just hit it.”

“Leddie has grown into being a patient back,” said Neal Brown. “He kind of hung in there and then hit it.”

On the first play of the fourth quarter, Doege hit Sam James on an 8-yard scoring strike, putting the Mountaineers up 31-10. Alec Sinkfield capped the WVU scoring with a 3-yard touchdown tote with two minutes to play.

Alonzo Addae reeled in his second interception as a Mountaineer and true freshman Akheem Mesidor collected sacks on back-to-back plays in the third quarter. Jeffrey Pooler also had a pair of sacks. West Virginia finished the game with 5 sacks and they allowed just 62 rushing yards. Josh Chandler-Semedo led the Mountaineers with 9 tackles.

“We kind of get in a mode where we are locked in,” Chandler-Semedo said. “They’re not going to get another yard. Nobody is going to get nothing on us.”

West Virginia was penalized seven times in the first half, but just once in the second half.

Jarret Doege completed 26-of-44 passes for a season-high 318 yards with 3 touchdowns and an interception. West Virginia outgained Kansas 544-157.

“We probably had about 75 yards in dropped passes. So we have to continue to get better in that aspect. But we are getting closer,” said Neal Brown.

West Virginia (3-1) will hit the road to face Texas Tech (1-3) next Saturday. The game will kickoff at 5:30 p.m. and will be televised by ESPN2. MetroNews pregame coverage will begin at 2 p.m.