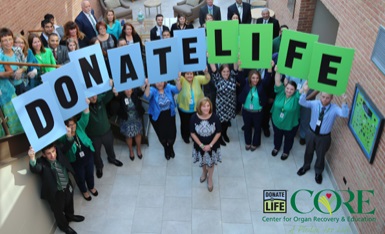 CHARLESTON, W.Va. — A West Virginia woman whose husband died from a heart attack last fall says she takes comfort in knowing he lives on in new ways because of organ, tissue and cornea donation.

“He was such a giver in life. He loved the Lord and he loved people. This was just another way that he would be able to give to someone,” Tina Miller said of her decision for her late husband, Lt. Col. Chaplain Jack Miller, who died at the age of 46, to become an organ donor.

She said she thought, “His legacy is continuing. I’m still honoring him. Yeah, I had to do it.”

In 2019, the late Jack Miller was one of the 55 organ donors and 512 tissue and cornea donors from West Virginia.

Due to COVID-19, those with the Center for Organ Recovery and Education, also known as CORE, have postponed the ceremony held traditionally in September to honor those donors for their gifts to transplant recipients.

Next year, a Marion County woman may be on the donor list.

Debbie Huffman is a match for a kidney transplant for her niece, Sami Wilson, 19, a Fairmont State University student from Harrison County.

“I wasn’t sick at all,” Wilson, a Bridgeport High grad, said of the time prior to March of this year when she went to a hospital emergency room because of stomach pains.

“It (the pain) was from a cyst that had burst on my ovaries and then they just took some regular lab work and it came back that my kidneys were in failure,” she said.

Wilson could not believe it.

Neither could her mom, Kim Wilson.

“She was a healthy athlete and active, no health issues whatsoever. She never hardly went to the doctor for a cold or anything so this was a complete shock to all of us,” she said.

Since August, which Kim Wilson described as “a bad month for Sami,” the two have been staying at the Ronald McDonald House at UPMC Children’s Hospital of Pittsburgh where Sami has dialysis three days a week for at least four hours a day.

As of now, her kidney transplant surgery is tentatively scheduled for Nov. 6.

Her planned donor is a living donor.

Tina Miller, who is from Beckley, met her future husband, Jack, an Ansted native, in the early 1990s when they were both students at WVU Tech.

Initially, because she was eight years older, Tina Miller turned down Jack Miller’s requests for a date. After a year of his asking, she agreed to go out with him. The two were married in 1995.

“We had a wonderful life,” she said.

Miller was a longtime pastor who joined the West Virginia Air National Guard’s 130th Airlift Wing as a chaplain in 2005 prior to three deployments to Saudi Arabia, Germany and Qatar.

The couple, parents to two, had been married for nearly 25 years when he died from a heart attack.

“He was chasing me around our kitchen table that morning and saying that he was going to chase me in a nursing home on his walker,” Miller remembered. “Then three hours later, I get a call — get to the hospital. He was gone.”

Tina Miller later learned about the possibility of organ donation.

Currently, 500 West Virginians are on waiting lists for transplants, according to CORE.

The organization is one of 58 federally-designated, not-for-profit organ, tissue and cornea procurement organizations in the United States with a coverage area that includes West Virginia, western Pennsylvania and part of New York.

She said she now sees organ donation as a gift.

“It is a gift and it is another chance for somebody else to live.”