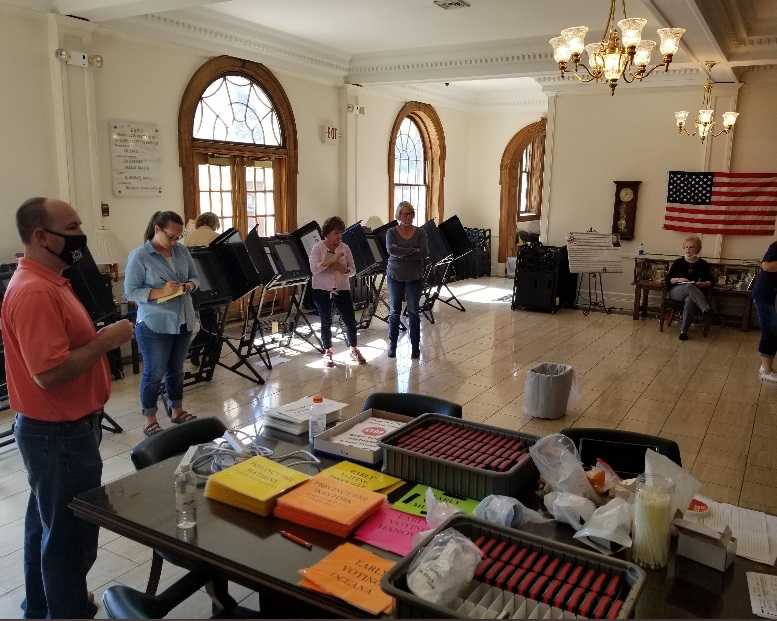 This picture is from a poll worker training session in Wyoming County, W.Va. on Oct. 6/WV Secretary of State's Office

CHARLESTON, W.Va. — At 73, Cindy Irons from Marion County is in the age group of people deemed at highest risk for serious effects from COVID-19.

Yet, like she has done for 18 years, she is currently serving as a poll worker for early voting in Marion County and plans to be out on Election Day as well.

“I think it’s my duty,” Irons told MetroNews. “It’s everybody’s duty to work for their country and keep our country going and safe and keeping it great.”

After years at the Marion County Courthouse, Irons is the commissioner for the White Hall satellite early voting location that was first used for the June primary in the coronavirus pandemic.

Coming up on Nov. 3, she will be stationed at the White Hall precinct.

Lauren Hunter, who turns 43 in November, is one of the West Virginians who will be serving as a poll worker for the first time during the general election.

She has been assigned to a location in Jackson County.

“I think this particular election, it just awoke something in me,” she said.

“I’ve always had fairly strong opinions about politics, but I’ve never really been one to voice them or take a lot of action and, this year, I just felt like it was really, really important.”

In Berkeley County, Bill Kearns, the director of the Berkeley-Morgan County Health Department, has been leading the local pandemic response.

Still, he plans to continue his traditional Election Day service as a poll worker which dates back to the 1990s.

“It’s always a great opportunity to see the community come in and exercise their civic rights to be able to vote,” Kearns told the Panhandle News Network.

“Lots of people have given their lives for that freedom — to be able to come out and vote for who they feel should hold an office.”

“With the pandemic, it’s added another level of complexity. So now we not only have to have people come out, we also have to make sure as poll workers, as election officers, we make sure people are safe when they’re coming out to vote,” Kearns said.

In all, it takes above 9,000 poll workers to staff 1,708 precincts across West Virginia on Election Day, according to the Secretary of State’s Office.

For early voting, at least two individuals of opposite parties are required per county.

For the first time, the United Way Collaborative has been recruiting potential alternate poll workers as part of the Secretary of State’s “Operation Elective Service.”

“We’re really thrilled about that because that’s ultimately what it was about — was allowing some of the older poll workers who would traditionally work the polls the opportunity to stay home if they didn’t feel like they could be safe at the polls.”

The elective service campaign also continues to include the West Virginia Real Estate Commission which has been again offering continuing education credit to organization members who put in hours for training and on Election Day as poll workers.

“The Elective Service is just so critical to this general idea that we all need to give back to the election,” White said.

“We are in a global pandemic. We are in a crisis. It’s going to take thousands of volunteer poll workers to make this election a success and it’s critical to our country that we do.”

In Marion County, Irons said they usually have a “terrible” time getting younger people to regularly work polls.

She first got involved as a poll worker after she retired.

“You need somebody that can keep a level head, especially people that know the people coming in voting and everything. You get a good camaraderie with the people that come in and then that makes them want to come back,” she said.

“That’s what we’re all there for is to get everybody out to vote.”

Hunter is mother of three, with two of voting age. She said she hoped to set an example.

“I feel like almost everybody has an opinion and I think that opinion needs to translate into a vote at the polls,” she said.

“It’s very important that people cast their ballot and make their voice heard.”