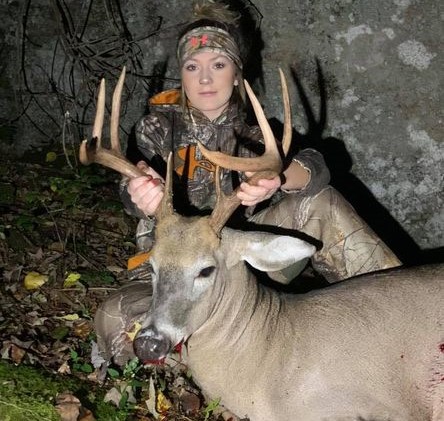 HICO, W.Va. — Chances are pretty good if you catch up with Ellie Groves of Hico, W.Va. she’s going to be outside doing something. The 16 year old junior at Midland Trail High School is pint sized, but she stands tall in the saddle when she’s engaged in her passion of horseback riding. She’s also not to be underestimated when she’s hunting deer.  This year she has, not one, two nice bucks to brag about.

“We had been watching a few bucks and we had found a place where they were coming into the acorns. Opening morning I sat out there for only about an hour and a really nice, long-tined seven point came out. I put the smack down on him and he didn’t run anywhere,” Ellie shared in a recent edition of West Virginia Outdoors.

But the young lady wasn’t done. She returned to the same spot the following Wednesday, along with her dad.

“I sat out Wednesday evening and the big, big nine-point came out. I shot him, he didn’t’ run anywhere either, and I’ve had the best year I’ve had so far,” she shared.

Listen to “Ellie Groves on West Virginia Outdoors” on Spreaker.

Tagged out until gun season, Ellie noted her woodsmanship was a gift from her dad, Kevin Groves.

“My dad is really the one who taught me everything I know about hunting. It’s really something we connect on. Regardless of if we harvest anything or not we have a great time. There’s so many memories over the years hunting, being out there, and travelling to our hunting trips. I wouldn’t trade it for anything. He’s my favorite hunting buddy,” she said.

Ellie has been hunting for as long as she can remember. You’ll commonly find her with her dad on hunting trips to neighboring Ohio, and all over the state of West Virginia.  But her favorite spot is where she nailed those two aforementioned bucks,  on the family farm in Nicholas County. The farm is also where Ellie enjoys her horses.

“I do love to ride. I have several horses of my own and it’s a really big part of my life. I try to ride as much as I can, but I love anything outdoors, I eat, sleep, and breathe it. I’m outside more than I am inside,” she said.

This year, the stark changes brought on by the Covid 19 virus have helped Ellie fuel that passion. Schoolwork since March  has largely been limited to on-line duties because of various virus protocols. She’s used the opportunity to stay busy with her outdoor pursuits, although she admits as it turned out she didn’t really need it.

“It’s really given me a lot more time to hunt this year, but I hunted twice  year, and both times I killed a really nice deer, so that was pretty lucky,” she explained.

Ellie’s passion for hunting and fishing, along with her success, tends to tie the boys up in knots.

“All the guys are complaining, ‘Oh man I wish I could hunt where you’re hunting.’ or ‘I wish I could kill a big buck.'” she laughed.

But according to Ellie, they’ll have to do their own scouting and homework if they want to keep up

“It definitely gets a lot of attention, but I’m not one to give up the honey-hole.”

Outdoors
Survey shows trout are still in the stream well after stocking
Trout are still in the stream, even when you don't see them and to catch them, you'll need to adjust your tactics.
By Chris Lawrence
Outdoors
DNR looks to amend walleye regulations on three waters
Blanket walleye regulations have been reviewed for three northern West Virginia waters, turns out they're not working as well as hoped and need adjustment.
By Chris Lawrence
Outdoors
Ohio angler logs a record breaker while catching bait
Ethan Moss and a buddy were catching some fish to cut up for catfish, and suddenly got into a mess of big ones on the Ohio River.
By Chris Lawrence
Outdoors
It's Tour De Coal weekend in St. Albans
The 12 mile flatwater float trip celebrates and spotlights the Coal River and has evolved into one of Americas biggest flatwater events.
By MetroNews Staff
View AllHoppy's Commentary