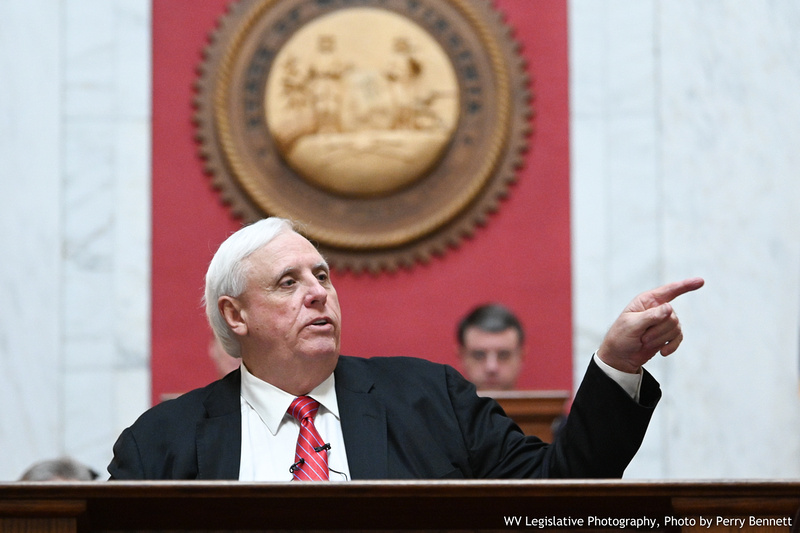 Gov. Jim Justice makes a point during his 2020 State of the State address, with House Speaker Roger Hanshaw behind him. Perry Bennett/West Virginia Legislative Photography

With big wins on Election Night, Republican leaders in West Virginia are already talking about how they’ll use their dominance to push policy, particularly changes to the tax code.

Like other property tax rates, those are defined in the state Constitution and can only be changed through an amendment approved by voters.

One of the few Democrats remaining in the Legislature, Mike Caputo, suggested paying some attention to how state government would pay its bills. Caputo is a delegate who just won election to the state Senate.

“I’m all for that, but where are you going to fill that hole? Somebody’s got to pay those bills,” said Caputo, a Marion County resident.

The personal income tax represents 43 percent of the General Fund, or $1.97 billion of the base budget this fiscal year. In other words, it represents almost half of how state government pays for the basic services of state agencies.

Justice described eliminating the state income tax as his No. 1 priority today.

“I would love to see us tackle getting rid of the state income tax,” he said. “I think there’s a real opportunity to do it as long as we keep pitching these great numbers.”

Justice acknowledged there is more to explore such as how it would be done, over what period of time and the effects on the state budget. The governor said he has floated his desire on the tax to his top financial advisers many times.

“I truly believe we need to move and move on that now,” Justice said.

.@WVGovernor Jim Justice joins @HoppyKercheval to discuss the red wave in West Virginia and his win in re-election for Governor as well as the work to be done moving forward in WV. WATCH: https://t.co/wkudfIRZCB pic.twitter.com/oZey4LKmKW

Justice got behind a state Senate initiative in 2017, his first year in office, to change West Virginia’s tax code.

It was a complicated proposal that would have raised sales taxes and added taxes to additional economic sectors while cutting the income tax over a period of years, prompted by “triggers.”

The proposal didn’t gain consensus in the House of Delegates, where members of both parties were skeptical of what the bill would actually do.

The disagreement — and fizzling of the proposal — was cited by Justice as recently as today as a reason why he left the Democratic Party and became a Republican.

The state Senate came out of Election Night with a 23-11 Republican supermajority.

The House of Delegates now has a  76 to 24 GOP advantage.

Hanshaw, the House Speaker, said that supermajority may enable big thinking, including an examination of the shape of West Virginia government, including taxation and the fundamental structure of state and county government.

“Does our constitution currently square up with where we want to take West Virginia structurally?” Hanshaw asked on “Talkline.”

Hanshaw specifically spoke of changes to equipment and inventory taxes — longstanding areas of focus by Republicans who believe the taxes hamper business investment. The Constitution restricts any quick change to the taxes, though.

House Speaker @SpeakerHanshaw speaks with @HoppyKercheval about the red wave of voter turnout in West Virginia and the work to be done post-election. WATCH: https://t.co/wkudfIRZCB pic.twitter.com/OPFUSOIs75

Kelly Allen, executive director of the West Virginia Center on Budget & Policy economic think tank, urged caution when tinkering with the tax code. She was responding to comments made today by Justice and Hanshaw.

“The way to grow West Virginia is by investing in our people, not by eliminating nearly half of our state’s general revenue,” Allen stated.

“Efforts to eliminate the business inventory tax and the personal income tax both give disproportionate tax breaks to a few wealthier West Virginians and out-of-state corporations at the cost of working West Virginians—either through regressive tax increases or cuts to critical public services.