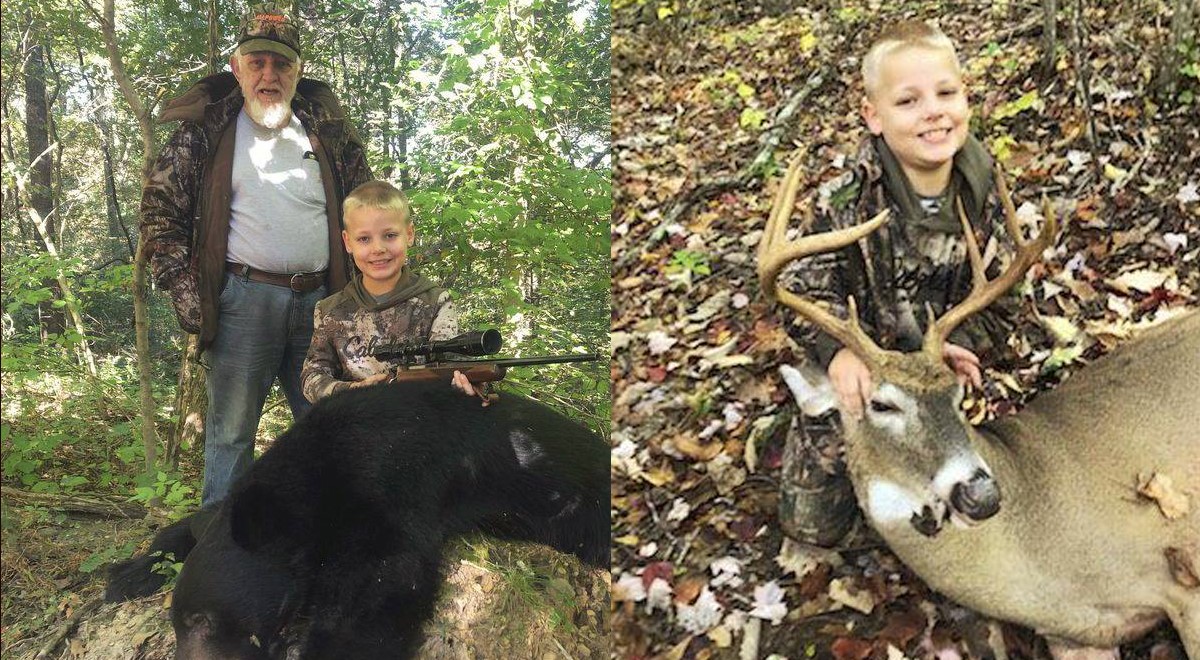 Evan Walls with his deer, his bear, and his Papaw.

ALUM CREEK, W.Va. — There are few things which can compare to the excitement of a youngster who has completed a successful hunt. Therefore, when you ask Evan Walls, age 8, of Charleston about his 2020 hunting season you better be prepared to listen for a while.

Evan is a student at Alum Creek Elementary School in Kanawha County and ever since the middle of October, he’s been the Big Man on Campus for his accomplishments.

“I told my buddy Owen, ‘Hey Owen when I get to go to Hollywood for killing all these bears, I’ll get you in there with me and tell them you’re my assistant,'” Evan said in a recent conversation on West Virginia Outdoors about the year he’s had so far.

2020 didn’t produce Evan’s first deer, but it did produce the biggest buck he’s ever killed. In fact, he took down a buck which would make most adult hunters envious. He tells the story in vivid detail about hunting with his dad John Walls from a tree stand during the bow season in October.

“I was facing one way and my dad was facing the other. I thought he was just kidding when he said there was a monster buck. But then I saw it and yep, it was a buck,” he explained.

Listen to “John and Evan Walls from W.Va. Outdoors” on Spreaker.

Evan missed no details about the story, noting that he and his dad had their scent under complete control because of a “good dirt cover scene.” As part of the back story he also shared the strategy of moving their stand a day earlier since they had been overrun with cutting squirrels and peppered with bits of hickory and acorn.

“I told my dad it’s a good thing it wasn’t walnuts falling on us,” he digressed.

But back to Evan’s story, the buck was wary and went over the hill, but he still returned and as Evan suggested, 25 second later, he stuck him.

“He started walking up and I ended up getting a good shot and we both saw the arrow hit,” he said.

The arrow hit a rib, but one of the flanges on the broadhead apparently broke and caused the arrow to take an odd angle and break off as well. It took a while, but as Evan explained they finally found the “good blood trail” after waiting.

“We decided to wait about three hours because we’ve made that mistake before and keep jumping him up,” he said.

A few hours later they were on the trail and tracked down the big eight pointer. Evan was understandably elated.

A week later, Evan bugged his dad to take him out during the early bear season in Kanawha County.

“He had to cut fire wood that day, so he said, you’re going to get some time with your Papaw,” as Evan told it.

In what can only be described as the most beautiful word pictures ever crafted, Evan spun the tale of how he and his Papaw were “talking and sharing stories” in their tree stand when a bear rolled through.

“He walked right under our stand and it felt like if that thing wasn’t there we would just land on its back,” he explained.

The bear wasn’t sticking around and headed for parts unknown. But it wasn’t long until something appeared in the mist rising off the field Evan and his papaw were over watching in the early morning hours.

“We were just telling more stories and fog had covered the whole field, but we could see a black shadow. Papaw said this wasn’t the same bear and said this was a bigger one. I got my gun ready and squeezed that trigger. It looked like he jumped 20 feet in the air and ran down the hill,” the young hunter told the radio audience.

“Turns out we were both wrong. We looked and looked and I was walking back and said, ‘Papaw, we didn’t hit the bear.'” Evan said. “But we looked over into the edge of the field where we hadn’t been looking and there laid a big, big black coat,”

Any reporter can write 10,000 words and make the most descriptive story you’d want to read, but do yourself a favor and click the icon and allow 12 minutes to listen to the entire story in Evan’s own words. Much like him, you won’t be disappointed.

Who knows, maybe Hollywood will come calling when he kills enough bears. Maybe then, he’ll let me be his assistant.