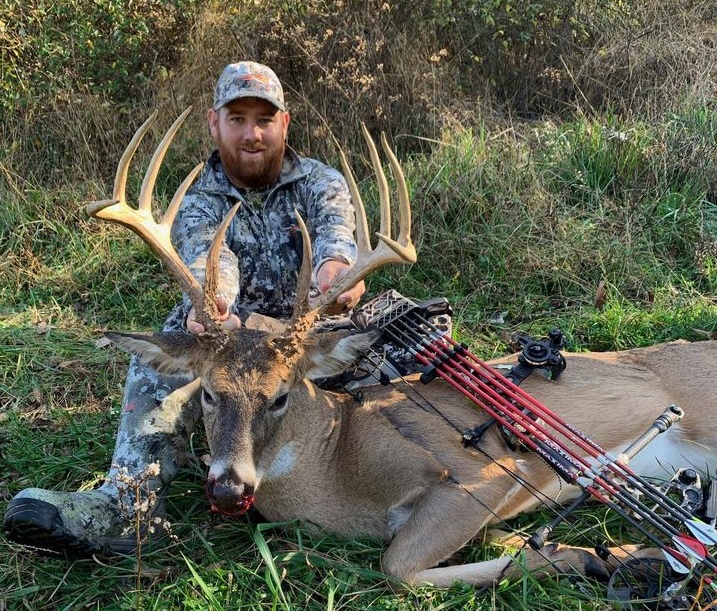 Brandon Marks and the 10 point beast he killed on Friday the 13th in Roane County, W.Va.

WALTON, W.Va. — Normally Friday the 13th is a day when bad luck is believed to be a certainty. You won’t be able to convince Brandon Marks of the theory.

“My dad used to say 13 was his lucky number, and I’m starting to think he might have been right,” Marks said on Saturday’s edition of West Virginia Outdoors.

Marks, back on Friday, killed a massive buck on his family’s farm in Roane County. The buck’s unique rack featured brow tines which look to exceed ten inches each.

Marks has killed nice bucks on the farm before, but they aren’t plentiful and according to him only come along in this size about once a decade.

Friday sitting in his stand was the first time Marks had laid eyes on the deer in person, but he and the brute were not strangers. The trail cam pictures had been telling the tale of this elusive critter for the past two years.

“I found it in an area I really didn’t even know he traveled in,”

Friday, Marks got into his stand around 1:30 in the afternoon and had just gotten settled in to hunt the afternoon when the scenario began.

“I was trying to settle in and I wasn’t there 15 minutes when I saw a deer off to the right cruising with his nose to the ground. When I saw the rack, I knew it had to be the deer,” he said.

Marks used a couple of autumn olive bushes between himself and the animal to draw back his bow.

“When he stepped out, I let it go,” he explained.

The massive deer, which Marks estimated would weigh roughly 200 pounds, darted over a nearby hill and crashed about 20 yards away.

“He wasn’t chasing a doe, but you could tell he was interested. It happened so fast, I didn’t even have time to get shook up,” Marks laughed.

Why would he be shook up hunting a deer he’s pursued for two years on Friday the 13th. After all, like Marks’ dad said, “It’s a lucky number.” Lucky indeed.