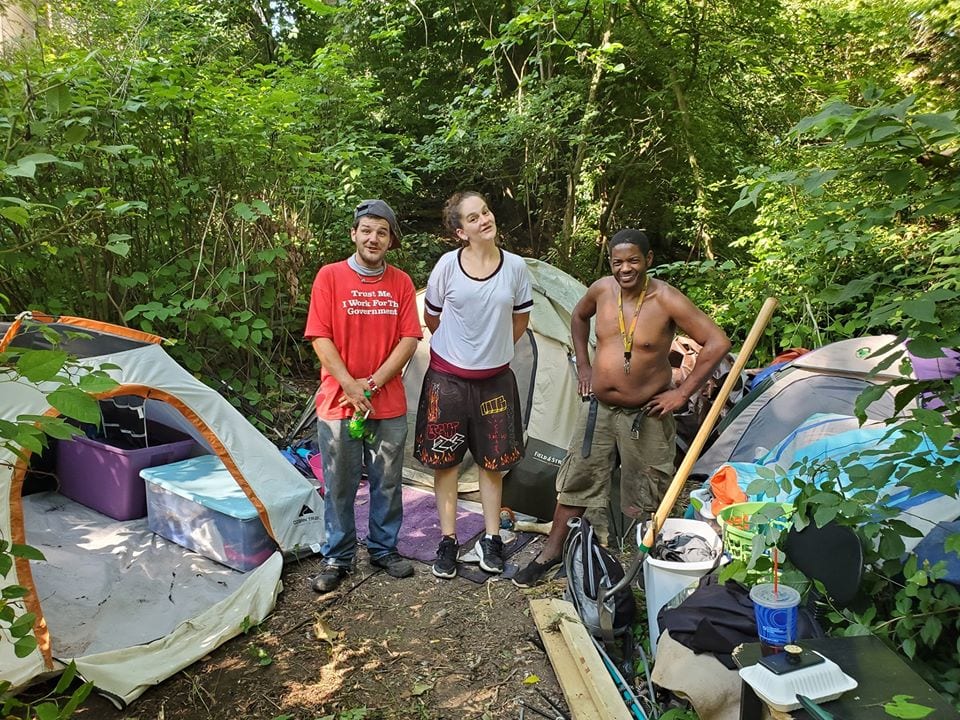 Attention on the camp picked up in July. (WAJR)

MORGANTOWN, W.Va. — A much-talked-about homeless encampment near Deckers Creek in Morgantown will be the subject of cleanup efforts Monday.

When officials attempted to close the Greenmont camp back in July campers moved from private property to adjacent land owned by the city.

The camp was initially established on private property in February and became home to more than 20 people. As agencies like the West Virginia Coalition to end Homelessness and Bartlett Housing Solutions helped those people find housing, camp advocates continued to move more people in, depleting the resources of the agencies.

According to Morgantown Mayor Ron Dulaney, police, social services agencies and city employees will work with any remaining residents Monday and give them two hours to remove belongings.

“They will be there to assist folks in terms of collecting their belongings, for anyone who’s there at that time,” Dulaney said. “I should also mention it has been posted since the 12th of November that the camp would be closed on November 30.”

After two hours, the team will comb the area for items of value that will be stored for the owners by the Morgantown Police Department until Dec. 14.

When 25 campers moved onto city property in July the city made a commitment to work with social service agencies to get each a housing offer,” Dulaney said.

“Five were never actually observed there by the social service agencies and they’ve been down there dozens of times,” Dulaney said. “Ten were housed, four, at least earlier this month were in jail at that time and six left on their own accord.”

Camp organizers said they have reversed more than 50 overdoses at the camp. In late October, Rebecca Colgan, 23, was found unresponsive in the camp with no pulse and a used needle was lying next to the body with fresh blood in the syringe. She died later at a local hospital.

Neighbors have complained about the drug activity during the life of the camp, as well as a reported increase in property crime.

“Who wants to see other human beings on the verge of life and death in agony and ill, if you will,” Dulaney said. “That cannot be an easy thing to observe or witness on a day-to-day basis.”

Dulaney insists the city and local agencies want to provide housing, treatment and services to help the people, but on city property in an established neighborhood may not be the appropriate location.

“I also empathize with the people that live near the camp that do have children who are experiencing what could be traumatic observations for some young people,” Dulaney said.

Cleaning up a camp doesn’t dissolve the problem, nor do the people. Finding real solutions before homelessness and treating people with substance abuse problems is the goal of the many agencies working with the city.

“What we’re trying to do is pull people together in a collaborative way to work more effectively to try to prevent this to begin with or certainly prevent homelessness, and to the extent that we can prevent and treat addiction when we have opportunities to do that,” he said.

News
Cases numbers, hospitalizations down in Sunday's DHHR COVID-19 report
23 counties are in the orange on the alert map.
By MetroNews Staff
News
McCuskey: It's time to renew civility in politics
State Auditor J.B. McCuskey's comments came in light of growing tensions in Washington, D.C.
By MetroNews Staff
News
W.Va. officials want to cut the income tax, but it's a big budget challenge
The personal income tax represents 43 percent of the General Fund.
By Brad McElhinny
News
Reports: Alabama assistant chosen to be Herd’s next coach
Charles Huff a top assistant at Alabama
By MetroNews Staff
View AllHoppy's Commentary