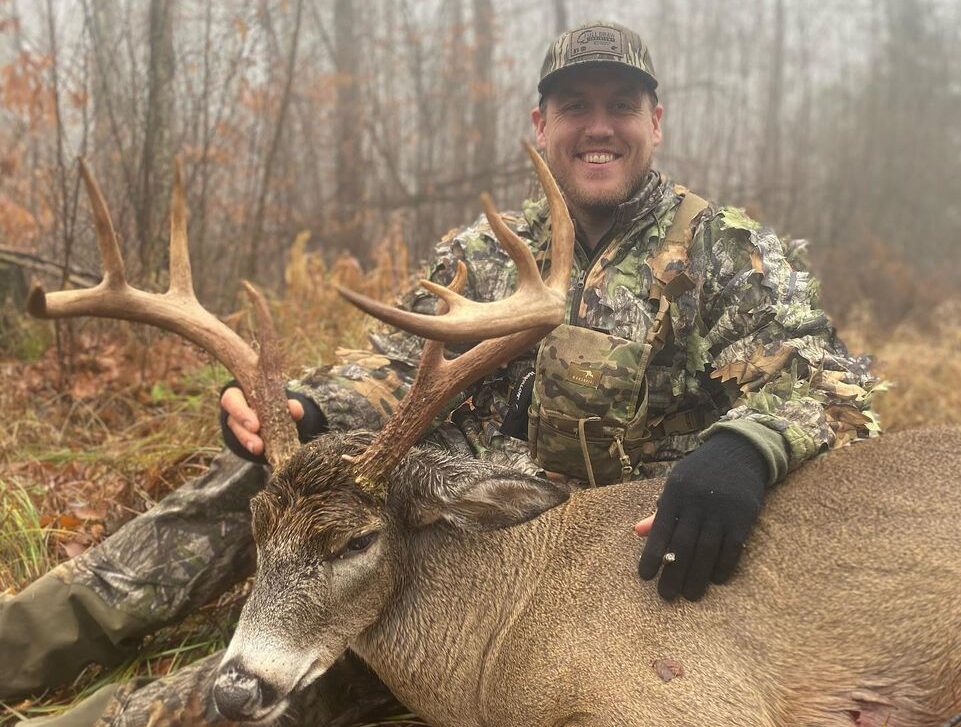 Tanner Burns with a buck he encountered in the right place at the right time.

BUCKHANNON, W.Va. — The best time to be in the woods hunting is the same as the best time to be on the water fishing. Whenever you have time. Tanner Burns is a school teacher and his time is limited. He knew he would have Veterans Day off so he planned to go hunting on a plot of ground in Randolph County.

But Veterans Day 2020 was an ugly day. Former Hurricane Eta was depositing all she had left on the hills and hollows of West Virginia. Burns, undaunted, headed out.

“I got the day off, I’m going, I don’t care if it is raining,” Burns said on West Virginia Outdoors.

Listen to “Tanner Burns talks about his Old Man of the Mountain on W.Va. Outdoors” on Spreaker.


It was a smart decision. He arrived at his spot and checked the S-D card in his camera.

He also knew from experience, the process would last two or three days.

“I knew he was still in the area and I had a chance at him. That evening I actually laid eyes on him and he was still with that doe, but I couldn’t get close enough to him,” he said.

The window of opportunity wouldn’t be open long. Burns knew what he had to do. He called in and took a personal day from school the next day. He went into the woods an hour before daylight. Conditions were miserable. Burns explained he hung his stand in the fog, hoping he was properly positioned. Only ten minutes after he settled into position a lone doe came walking out of the thicket.

“It looked like his doe and I figured he wasn’t far behind her and then I heard a loud grunt coming out of the fog. It was all I could do not to come out of that tree,” he laughed.

The big deer came out of the mist, but in the thick fog there wasn’t enough daylight to make the shot. The pair went back into the thicket. Burns knew he would probably get another chance and in about ten minutes spied the doe a second time walking through an opening at about 35 yards.

“I got turned around and situated and sure enough I saw his antlers coming through the woods. I was so worked up I can’t even remember settling the pin. When I shot my first reaction was, ‘Man I just heart shot that deer.’ It looked perfect,” he said.

However, perfect wasn’t exactly the case. The lighted nock on Burns’ arrow was dancing though the fog hanging off the side of the massive buck. It kept getting further and further away. Burns watched his buck stop at about 70 yards and waited for him to crash. All he could see was the light and the longer it was visible the less confident he became in what he thought was a perfect shot.

“I bailed out of the tree planning to shoot him again if I had to,” Burns said. “But on the ground I lost my vantage point.”

A sinking feeling came over him as he slowly trudged through the fog, struggling to see 10 feet in front of him.

“Finally, I looked behind a log and I see his while belly moving up and down as he took his last breath,” he said.

Burns was right he had put the arrow through the bottom part of the deer’s heart and he still managed to run almost 100 yards. It turned out he was an eight year old buck and one tough rascal. A friend of Burns who had been after the same buck had a picture of him at age 5 after he was shot with a crossbow. The wound healed. He was also shot in the neck with a rifle around age three. The bullet had only grazed him, but left a scar.

“This deer had been through it and the guy who had actually named him ‘Scar’ for all he’d been through,” he said.

Burns admitted some emotions rolled out as he called his dad to tell him. It may not have been the biggest deer, but the brute had lived a long and eventful life.

“He’s not the highest scoring deer, but what made it special was he was an eight year old deer, in Randolph County where people hunt them pretty hard.”