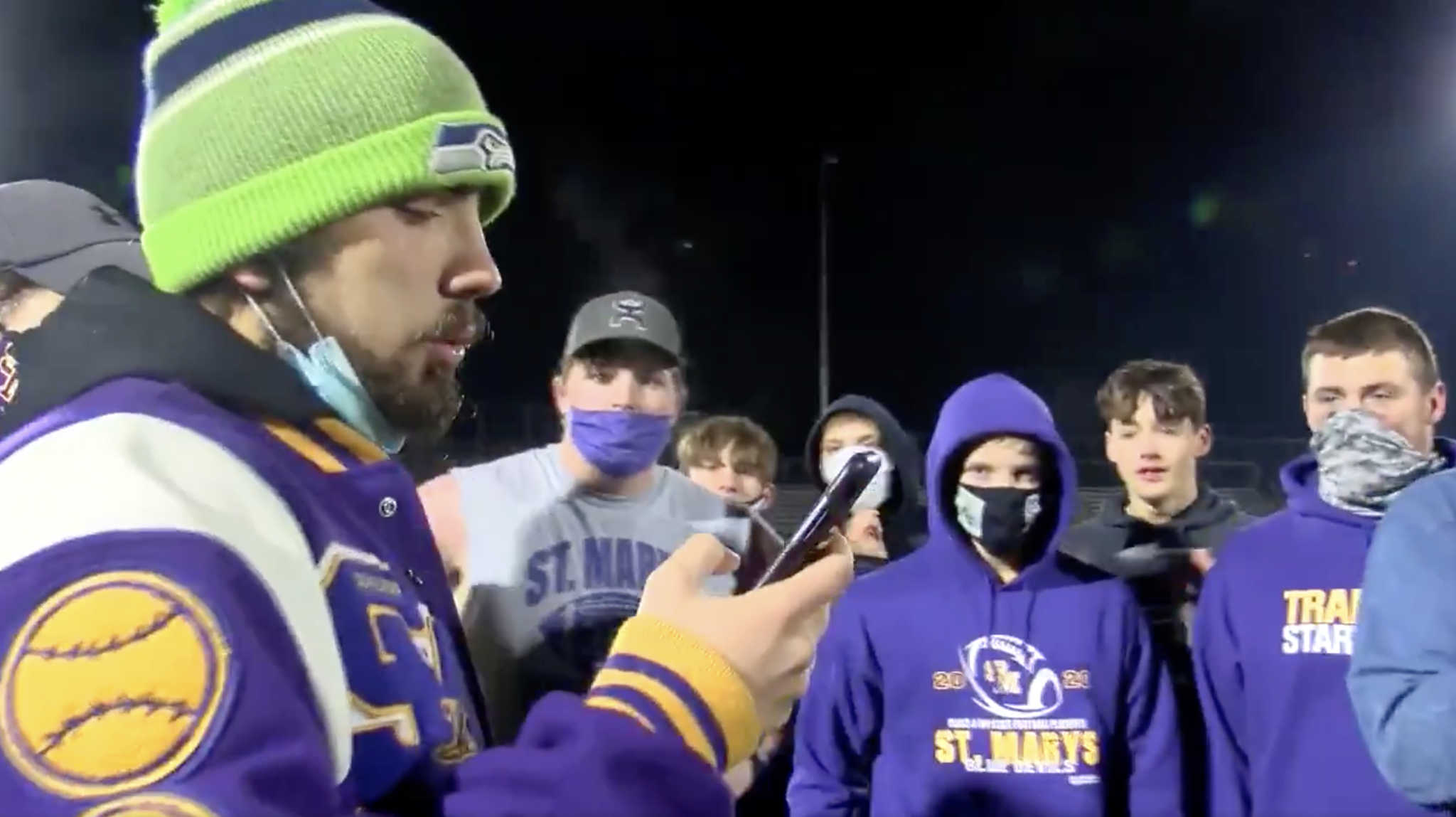 ST. MARYS – Some five hours after St. Marys’ 21-7 win over Pendleton County in the Class A Semifinals, the lights at Bill Hanlin Stadium were turned out one more time in 2020 as the Blue Devils players, coaches and a handful of fans gathered to wait official word on what everyone already assumed, St. Marys had won its second Class A State Championship.

As temperatures dipped toward the freezing mark on the banks of the Ohio River, Blue Devil players took to the field for a final time. The sense of excitement and uncertainty that quickly replaced the celebration following the win earlier in the day, still lingered. Players released their anxious energy with impromptu games on the field amongst themselves, everything from “Duck, Duck Goose” to “Tag.” For others, excitement evolved into frustration and disappointment knowing the 2020 season was about to come to such an unceremonious ending.

Finally, at 8:45 pm, senior Jason Clayton delivered the message to his teammates, that due to the color-coded map the Super Six was cancelled and St. Marys had been declared the Class A State Champions.

“It was stressful waiting on the results to see what happens. Either way, it was good with me,” said senior Cyle West.

Clayton’s attempt to read the remainder of the statement from the West Virginia Secondary Schools Activities Commission was quickly drowned out by a roar of cheers from his teammates and the handful of fans who returned to learn the news. As Prince’s “Purple Reign” blared on a portable stereo someone had brought on the field, the surreal experience of the day started to set in.

“They can say whatever they want but we’ve been out here putting in the work, practicing every day, running hills, doing everything we need to do to get the job done,” stated senior Brayden Wilson.

St. Marys’ players and coaches were well aware of the situation heading into the semifinal matchup with Pendleton County, that Saturday’s game could end up being the defect state championship game.

Ritchie County, which just a week ago upset Greenbrier West to advance to the semifinals, had turned “red” on the Department Health and Human Resources’ daily COVID map on Saturday and there was almost no chance that would change when the state Department of Education Map was released at 5 pm.

“We saw the map came out and we knew this could be the state championship game and we had to go out and play like it was out last. We didn’t have another game if we won,” explained senior Brennan Boron.

With the uncertainty now gone, excitement once again filled the stadium and the celebration was on. School officials organized a spur of the moment parade, complete with a police escort through town to honor the team’s accomplishment in a season many thought may never happen at all.

“I said all along, before the playoffs even started, there would be an asterisks on the season, regardless of who won but it still doesn’t take away from the accomplishment those guys were able to earn,” expressed Coach Jodi Mote.