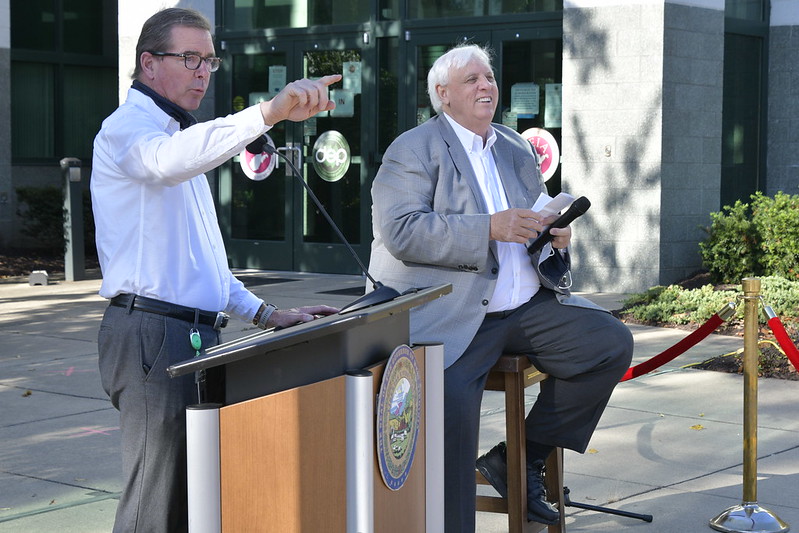 Gov. Jim Justice has announced the resignation of Austin Caperton, who has served as secretary for the Department of Environmental Protection for the duration of the governor’s first term.

Caperton, 69, says he wants to move on and focus on projects outside of government.

“He has served the people of West Virginia incredibly well for four years and I sincerely thank him for his service to our state,” Justice stated this afternoon. “While I’m sorry that he will be leaving my team, I know that he has some great opportunities that he wants to pursue.”

Caperton informed top staff at DEP in a memo and in a conference call on Monday. That’s also when he told the governor of his departure.

Caperton’s departure is effective at midnight Jan. 18, 2021; the end of Governor Justice’s current term of office. The administration today said the next DEP Secretary will be appointed by the governor at a later date.

“It has been an honor and a privilege to serve the great state of West Virginia and its citizens,” Caperton stated. “I can not say enough about the quality of leadership Governor Justice has provided to me and to the State. This year has made me realize, more than ever, that our days are limited. I want to pursue other interests and I have decided to start now, rather than later.”

Justice credited Caperton with disbursing more than $100 million in grant funding through the Abandoned Mine Lands Pilot Program, helping West Virginia meet all federal ambient air quality standards for the first time in more than 40 years, and developing the T&T Treatment Facility – a groundbreaking watershed restoration project in the Cheat River watershed.

“He has excelled in balancing the absolute need to protect our environment with the importance of working with industry to grow manufacturing responsibly in West Virginia,” stated Rebecca McPhail, president of the association.

“Secretary Caperton always recognized the individual and collective talents among agency staff, and he empowered everyone at DEP to work with all stakeholders on issues that shape our collective goals of protecting the natural beauty of our state while growing our economy. We wish him well in his next chapter.”

Angie Rosser, executive director of the West Virginia Rivers Coalition, thanked Caperton for his service. But her focus was on who will succeed him as the chief of West Virginia’s environmental regulation agency and how the next secretary will approach the role.

“The DEP is an agency that has relevance for all of our citizens each and every day in making sure we have clean water to drink and clean air to breathe,” Rosser said.

“We will be watching with great interest who the governor appoints and hope it will be someone who will be a strong advocate for the DEP and its mission. We also want to see a renewed commitment to transparency and involvement of the public in agency decision-making.”

Rosser continued, “There are big responsibilities the agency carries to protect public health, especially in our heavily industrialized areas of the state. There is also the growing challenge to restore streams the coal industry has left for the state to clean up, as well as make sure that our citizens don’t end up paying the price for further environmental degradation. Leadership from the DEP in these areas are essential.”

During Caperton’s tenure, the agency had the high-profile and complicated task of regulating West Virginia’s portion of enormous interstate natural gas pipelines, including the Mountain Valley Pipeline and the Atlantic Coast Pipeline.

The agency generated some controversy when it announced it would waive key authority to determine if those two projects would violate state water quality standards.

But Caperton, at the time, said the state had opted for a different, two-pronged approach: strengthening the state’s particular requirements in a nationwide U.S. Army Corps of Engineers permit that is reissued every five years while also relying on state regulation through a West Virginia stormwater discharge permit that would cover the entire length of the pipeline.

But those regulatory decisions played a key role just a few weeks ago in a 4th U.S. Circuit Court of Appeals opinion to stay construction of the MVP project’s water permitting.

Under Caperton, DEP also faced scrutiny over its approval of an air quality permit for the Rockwool stone wool insulation manufacturing plant in Jefferson County.

“Our scientists and engineers with the WVDEP have reviewed all available data and have assured me there is virtually no other state in America that would have denied this permit.”

Protesters also objected to the permitting of a gas pipeline to service the Rockwool plant constructed on the site of the former Jefferson Orchards, across Route 9 from North Jefferson Elementary School.

Although environmental groups found Caperton approachable, those conflicts have them looking ahead to who might replace him.

“Throughout his tenure, the Sierra Club took multiple legal actions against the agency as a result of his decisions. We’ve long been concerned about Secretary Caperton’s strong commitment to special interests, in particular the mining industry, but we hope that his departure might make way for someone who has an equally strong commitment to the protection of clean air and water.”

Caperton, a longtime coal executive and cousin of former Gov. Gaston Caperton. was appointed to the position in January 2017 as Justice first took office.

He replaced Randy Huffman, who came up through the ranks at DEP before serving as secretary starting in 2008. Huffman left the agency to take a position at the Air National Guard.

For the prior 27 years, Caperton served as the president of Caperton Inc., a strategic business consulting company. The Justice administration’s announcement of his hiring at DEP noted, “Caperton has experience working with companies to create jobs in the energy industry.”

Caperton’s experience as a coal executive began in 1976 as assistant vice president of operations with Slab Fork Coal Company. By 1980, he served as president of Slab Creek, a position he held for three years. He became corporate counsel for Massey Coal Services, starting in 1983 and remained with various branches of Massey, including serving as vice president of development for one year until 1989.

Caperton also has served as the director of the Beckley – Raleigh County Chamber of Commerce, United Bank WV, the West Virginia Council for Community & Economic Development and the vice chairman of the West Virginia Public Energy Authority.