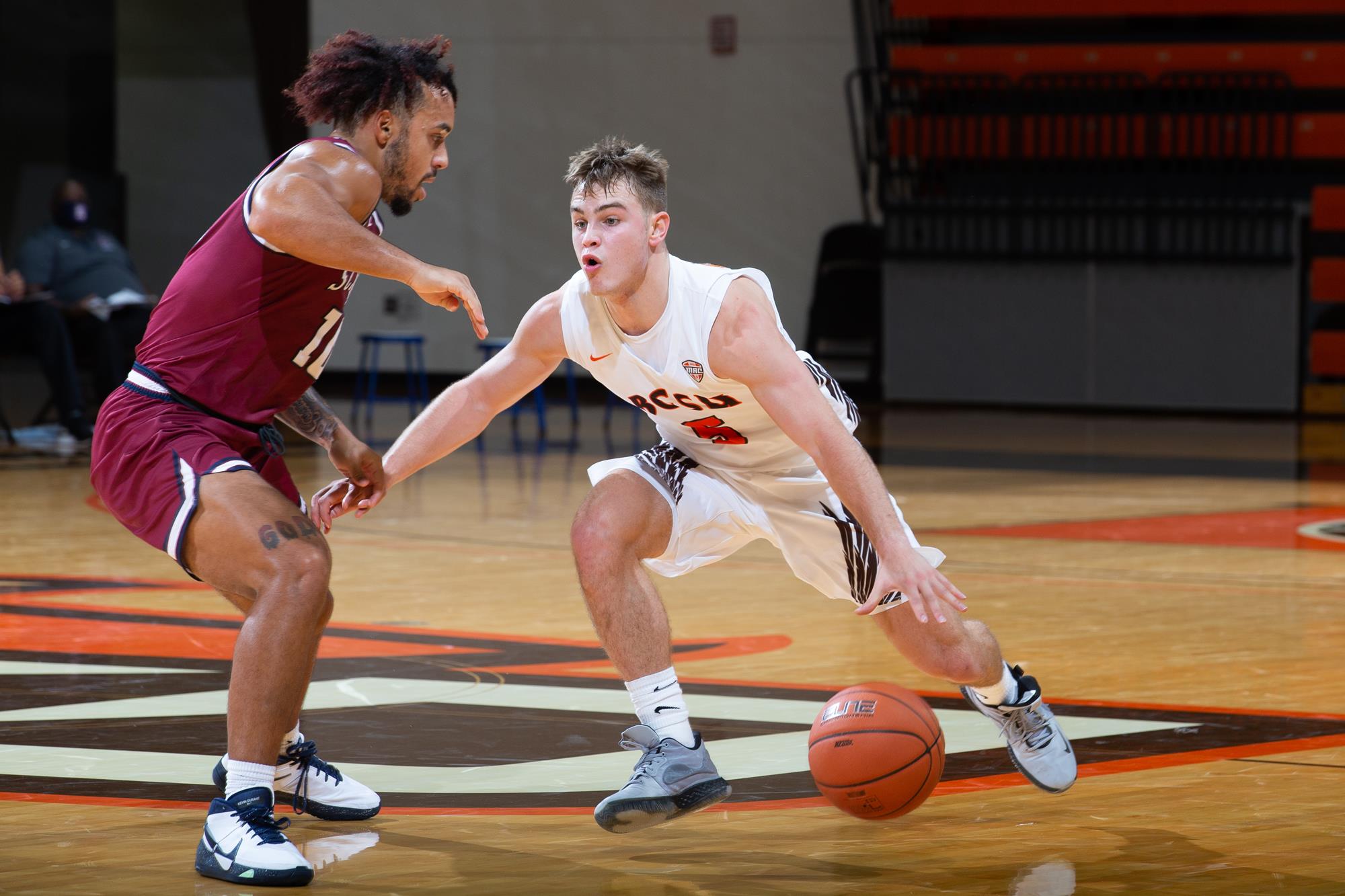 When Kaden Metheny was denied the chance to try and lead University’s boys basketball program to consecutive Class AAA state championships in March, he turned his attention toward preparing himself for the next level.

The next level was the start of a collegiate career at Bowling Green.

Six games into his tenure with the Falcons, Metheny has shown he more than belongs.

The 5-foot-11, 180-pound point guard has started all six games this season for BGSU, which sports a 4-2 mark entering Friday’s contest at Robert Morris.

“It’s been a crazy transition,” Metheny said. “I didn’t know much of what to expect, especially with COVID changing our schedule and all that. We came in later than usual in July because of COVID and things were a little rushed. We sat out a couple weeks because guys got COVID so that set us back some too.

Metheny is one of four Falcons scoring in double figures on average in the early going. He’s pouring in 11.5 points per game with strong shooting percentages — 44 percent from the field, 40 percent from 3-point range and 81.3 percent from the free throw line.

Metheny, the 2020 Evans Award winner as the top prep player in West Virginia, has scored 15 points twice, while registering double figures in four of six contests.

His BGSU career began with an ESPN televised game at Michigan in which Metheny finished with seven points and three assists in a 96-82 loss to the Wolverines.

“That was a crazy first game to come into, but I wouldn’t have wanted it any other way,” Metheny said. “I love the big stage and it’s been a dream of mine since I was little to play against teams like that on a national stage. I tried treating it like my freshman year of high school in terms of I wanted to play hard and earn whatever I could get.”

The Falcons followed their season-opening setback with four straight wins, including an overtime win at Appalachian State and a victory against Buffalo in the Mid-American Conference opener.

Although Metheny has been thrown into the fire and is playing 25 minutes on average, he continues to learn as he gains experience.

“The speed and length are definitely the biggest adjustments,” he said. “Playing with other athletes that are 6-9, 6-10, I didn’t play with that in high school. Being able to throw it up to the rim and a guy grabbing it and throwing it down is something I’m not used to. As each game goes by, I’m trying to get more comfortable and trying to get the game to slow down. I truly feel like that’s happening.”

The newcomer also feels like he should thrive in coach Michael Huger’s system, which allows Metheny to play with a lot of freedom.

“When my family and I made the decision to come to Bowling Green, we knew they had a system predicated around the guards,” Metheny said. “Every coach on our team has past experience playing and three were point guards in college. I knew I’d have the staff to put me in a position to succeed, because they did it themselves in college. Ball screens and spacing help me tremendously and the system is one of the main reasons I chose Bowling Green.”

Considering the Falcons surpassed 20 wins and finished 12-6 in MAC play each of the last two seasons, expectations are high for the team in Metheny’s first season. BGSU was chosen to win the MAC in the league’s preseason poll and has a 20-plus point per game scorer in Justin Turner, who will likely become the school’s all-time leading scorer this season.

“We’re predicted to finish No. 1 in the MAC, so we don’t take that lightly,” Metheny said. “We have a target on our back when we step on the court. We believe we have the talent and skill to hang with anyone. If we play what we’re capable of doing, we can knock off anyone.”