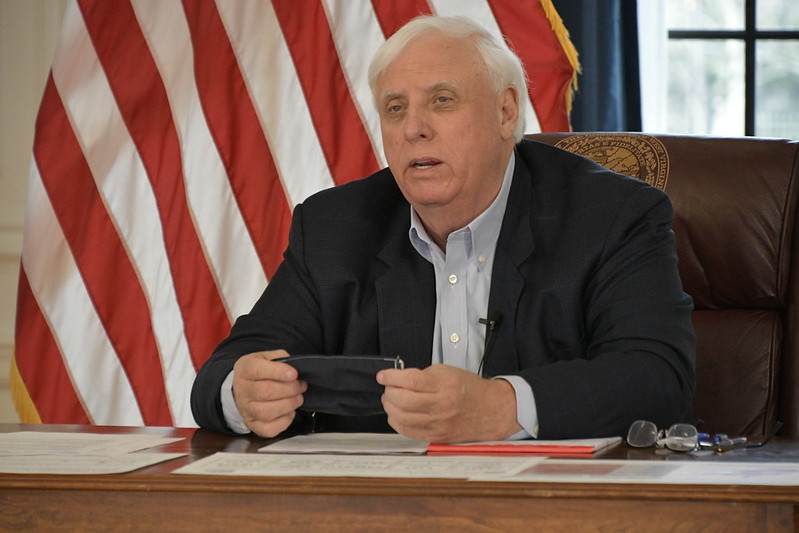 Gov. Jim Justice holds a mask while providing an update on the state's pandemic response.

West Virginia leaders are watching the state’s latest covid-19 numbers with caution, looking ahead to the possibility of another post-holiday spike and the difficulties of students’ returning to school.

“We anticipate, given the colder weather coming up and the more indoor connections between people, that the next couple months is going to be a very big risk time for all of us in the United States and in West Virginia. So it’s very important to pay particular attention to this time,” said Clay Marsh, West Virginia’s coronavirus response coordinator.

The ongoing vaccination effort should help, Marsh said, but state residents should continue to take steps of personal caution.

“Every West Virginian needs to be particularly focused on reducing their individual risk of getting covid and spreading covid, and that really does mean avoiding indoor places and crowds,” he said during a Monday briefing about West Virginia’s coronavirus response.

“After a couple months, three months, as we get the vaccine, we think things will really let up quite a bit as we get into the spring and it gets warmer outside. But this time is when we all have to be very, very cautious.”

Marsh acknowledged a spike in cases following Thanksgiving gatherings. He warned that the same could happen following Christmas, New Year’s and holiday gatherings.

Some of West Virginia’s numbers have eased up a bit in recent days.

The state reported only one death today. West Virginia reported six on Sunday. Sometimes those numbers are affected by the flow of reporting, though.

That’s down from 781 hospitalizations on Dec. 16. There were 206 ICU admissions that day.

But all those numbers are way up from just a month ago.

West Virginia’s rate of spread was 1.14 today, making the state tied for third worst in the nation. Anything above 1 means exponential spread. One or below is under control.

Only one county, Randolph, was green on today’s public health map. Four counties — Tucker, Calhoun, Roane and McDowell — were yellow. Those are the colors signifying the lowest levels of virus spread.

The map prompts remote learning for students when counties are depicted as orange or red, the highest rates of spread. With most counties now red or orange, Justice expressed concern about getting back in classrooms.

Asked later about what could change to allow for that to happen, Justice mostly described vaccination efforts. He also made reference to conclusions that students have not been causing the virus to spread in classrooms.

“The vaccine is surely the elephant in the room,” Justice said.

He added, without much detail, “We’re looking at everything.” And he said without elaboration, “There’s lot of different possibilities here of things we can do after the Christmas break.”

Despite the ongoing concerns, Justice expressed optimism over the longer-term situation.

“In the next very few months,” he said, “we ought to be turning this thing around.”